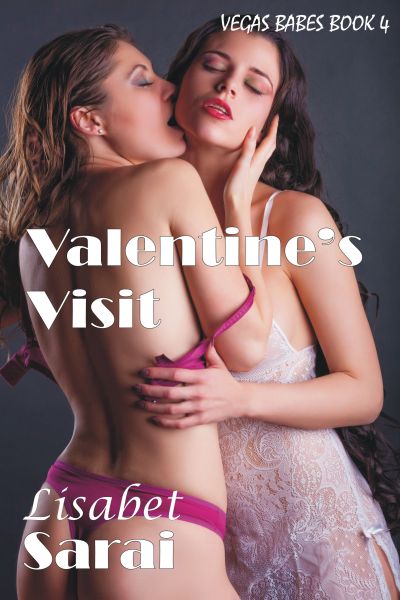 It’s finally Valentine’s Day! And I’ve got a brand new release to celebrate. Book 4 of my Vegas Babes series is out today. Valentine’sVisit is romantic bisexual ménage erotica, with lots of sex, but plenty of love, too.

Leave me a comment and I’ll enter you into a drawing to win a free copy.

When Jake and Fran are invited to Las Vegas spend Valentine’s weekend with Jake’s old friend Ted and his curvaceous ginger-haired wife, they’re not sure what to expect. The last time they saw Ted and Annie, at the Vegas couple’s pre-wedding stag party, the four of them had ended up in bed together. But maybe that was just a fluke. There’s only one way to find out.

Jake raised his head to gaze into her eyes. “You’re really something, Fran.”

“Likewise,” she replied with a grin. “Thank you.”

“I was just going to say that to you.” He crawled up her body to fasten his mouth on hers. She was amused to note that the passionate kiss caused his cock to stir and swell yet again.

“Guess we both need another shower,” he said, gazing ruefully as his sticky skin. “And I’d better put in a call to Dale at the restaurant, let him know I’ll be late.”

“Why not tell him you’re taking the rest of the day off?” Fran sat up and ran her fingers through her dark curls. The room was theirs until tomorrow. And she certainly didn’t feel like returning to her computer and the tricky page layout that had consumed her morning. Especially when that would require her to trudge through the sleet then spend five stops crammed into the train.

“Dad is very impressed by your performance. He told me so last week. Profit is up, complaints are down—you’re a natural manager.” She scrambled over to pull him into a hug, rubbing her rigid nipples against his chest. She knew that drove him wild.

“Franny!” Jake tried unsuccessfully to escape from her embrace.

She reached between them to stroke his mostly hard dick. “And you’re not?”

“Oh, is that so—?” A chirp from her phone interrupted her. With a frown, she grabbed it off the dresser, expecting a text from her boss. She was pleasantly surprised.

“Of course.” She read further. “Oh! They’re inviting us to come visit over Valentine’s weekend. They’ve got a new, two bedroom apartment. They want us to stay with them.”

“Go to Vegas? But what about work?” Jake shook his head. “I’m still trying to prove myself to your father.”

Fran settled her hands on her full hips and glared at her husband. “I told you, that’s not a problem. Dale can handle the restaurant for a few days. You told me you’ve been grooming him to take over another branch.”

“Don’t you want to see them?” She stepped nearer, then sank to her knees on the carpet in front of him. His dick surged at her closeness. She stuck out her tongue to gather a drop of pre-cum welling from the tip. “Gorgeous Annie? And your best friend Ted?” Pursing her lips around the bulb, she sucked gently. “Don’t you want to fuck them?”

“Oh!—c’mon, Fran—that might have been just a fluke. We shouldn’t assume— ”

“Annie says they’re having a Valentine’s party Saturday night. And that they want us to meet their friends.” Fran paused to swallow his erection and run her tongue up and down the taut length. He tasted like pussy. That just reminded her of eating Annie. She had to convince her reluctant spouse. “Her emoticon is definitely a leer.”

What a great excerpt for V-Day, Lisabet. Very hot, makes me want to read more. Good luck with this one!

What an exciting way to spend Valentine's Day! Great excerpt!