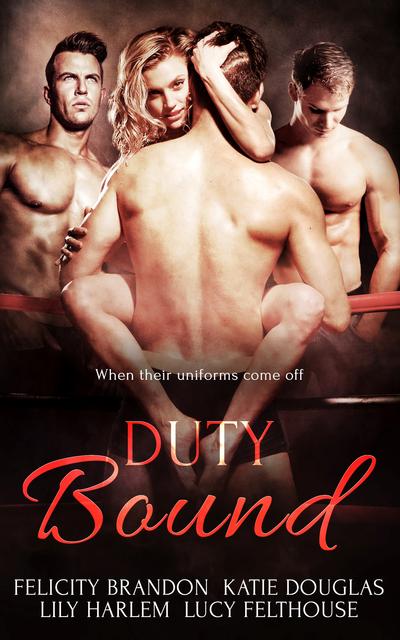 When their uniforms come off...

Bossy, dedicated, overprotective, super complicated. A woman needs a man like that in her life like she needs a temporal lobe headache, right? Think again, because when the uniforms come off and the temperature skyrockets, it’s time to forget Hell and take a trip straight to Heaven.

How about multiplying that by three, four, or more? You get the picture? This set of panty-melting reverse harem stories will have you gasping, panting, squirming and sweating. Read late into the night with these steamy tales featuring priests, military men, S.W.A.T. officers, gardeners, waiters, and more.

For a limited time only, grab your own harem of hot men who are determined to be the best of the best, especially when it comes to adoring their woman. Excerpt from Chasing the Chambermaid by Lucy Felthouse:

Only the slop, slop, slopping sound of her painfully slow footsteps through the thick, sucking mud convinced Connie White she was actually making any progress. Her limbs and extremities had long since gone so numb that she couldn’t be sure otherwise.

Come on, Con, just a little bit further. That sign said something about an estate, and an estate means buildings. A bloody cowshed will do—anything for some respite from this infernal sodding weather.

She pushed on for several more minutes, then gasped with shock and relief when her next step met not with sloppy mud or waterlogged grass, but a track. A rough track, but a track nonetheless. And it had to lead somewhere, surely? It ran left to right across the line she’d been taking, so Connie had to make a decision. Which way would lead her to… something? She was already soaked to the skin and freezing cold, so a couple of seconds of rumination wouldn’t make the slightest bit of difference to her physical state. She really didn’t want to end up going in the wrong direction and heading further away from any semblance of civilisation.

She took a breath and remembered her gran’s—long since dead, bless her—nonsensical motto—or one of them, anyway: If in doubt, turn left.

Connie shrugged, and another of her gran’s daft phrases flitted into her brain. In for a penny, in for a pound.

She hiked her backpack higher, hunched her shoulders against the relentless wind and rain, and turned left. Moments later, she was rewarded as the hulking shape of a building appeared from the sheets of wind-buffeted rain. Excitement gave her a burst of energy, spurring her on. Fifty feet. Forty. Twenty-five. God, what was this place? It looked so old and decrepit the Vikings could have left it behind. Doesn’t matter. If it provides even a modicum of shelter, it’s an improvement on where you slept last night. The wooden bench on the tiny village’s green hadn’t exactly been the warmest or most comfortable place to lay her head. And she shuddered to think about what would have happened if someone unsavoury had happened across her, alone and vulnerable. She’d been very glad to wake up and hurriedly continue on her journey that morning.

The last few feet went by in a blur of motion, her body still numb and not entirely under her control. At least the track was easier to walk on. It wasn’t particularly smooth, but at least it wasn’t trying to pull off her walking boots, like the sucking mud had been.

Finally, she burst through the building’s heavy door, only the adrenaline pumping in her veins making it possible to even shift the thing. Fuck, I’m exhausted.

The last thing she remembered was shucking off her backpack and slamming the door against the elements. Then silence.