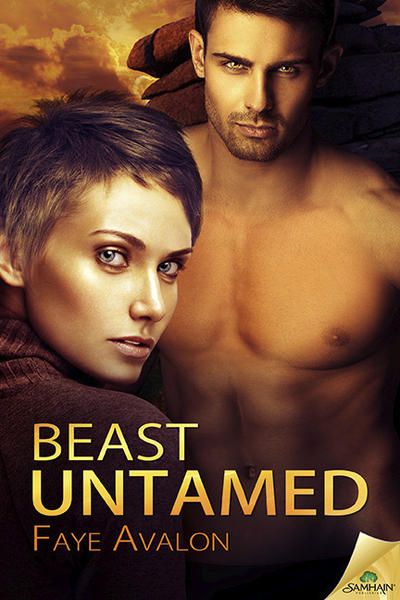 To guard his woman, he must claim his mate.

Ex-special forces operative Nathan Quinn enjoys women, but he just doesn’t trust them. Thanks to a mother who abandoned him, he prefers no-strings relationships, and has no intention of ever marrying or mating with a fellow shifter.

He focuses his energy on building his security business until a human woman catches his eye—and firmly rejects his charm. Which only challenges him to work harder to break down her barriers.

Born of ambitious, emotionally cold parents, Erin Howard’s craving for attention led her down a slippery slope to an abusive relationship. Now on the run from her ex, she plans to lay low and stay away from possessive, dominating males. But who says she can’t enjoy a little hot sex without a shred of commitment?

Soon their attraction explodes into something so fierce, that Nathan feels the primal need to mark Erin as his. But his fallback plan—distance himself—creates the space for Erin’s past to drive the final, possibly fatal, wedge between them.

Contains a sexy panther shifter with an attitude problem, a human female intent on playing things safe, and an anxious dog learning to co-exist with the local cats.

But when the door swung open in response to her knock, those nerves came flooding back with a vengeance. The man towered in the doorway, his dark and brooding good looks like something in a magazine devoted to warrior gods of times long ago.

“You must be Erin,” he said, the hint of a smile softening almost harsh features. “Come on in.”

He stepped back, and Erin was about to enter when Talia came down the hallway. “Great. You’re early. We can have a drink before we get going. You’ve met Caleb?”

Erin looked up at the man. Handsome, and built. No wonder Talia always had a satisfied smile on her face.

No sooner had she accepted Caleb’s outstretched hand than Talia reached out and all but pulled Erin into the house. “Come and meet everyone.”

Erin’s knees went wobbly, her stomach pitching in a way that had her evening snack threatening to revolt. Maybe she wasn’t ready for this after all. It was too soon. She needed time to adjust, to work out exactly who she was going to be, before she thrust herself into life again.
Talia had other ideas and guided her into a room off the hall. Stepping across the threshold, she heard Naomi’s laughter. Her new friend had her arms wrapped around the neck of a formidable-looking man who in turn had his arms wrapped around her.

“Break that up, you two,” Talia instructed. “Save it for your wedding night.”

“That’s days away yet,” Naomi complained, smiling up at the man who was obviously Tynan. “He can’t keep his hands off me for that long.”

“My female speaks the truth,” Tynan said. “Anyway the mating has already—”

“Ahem…” Talia loudly cleared her throat, and the couple looked over. “We have company.”

Erin had the distinct impression she’d interrupted something, and not just a heated embrace between an engaged couple. But the smiles that headed her way, and the companionable way Talia slid an arm around her waist, made her think she’d imagined it. She must be so on edge lately that she was seeing spooks where none existed.

“Come and meet Tynan,” Naomi said, grabbing her away from Talia. “Ty, this is Erin. She hasn’t been in Bodmin very long, and she works at the tea shop, remember?”

A look passed between the couple, and again Erin felt as if she was missing something.

But then Tynan smiled and held out his hand. “Good to meet you, Erin. Hope you’re ready for a raucous evening.”
He slipped an arm around Naomi’s shoulder, and the simple gesture was filled with possessive intent.

“According to my woman, you’re all going to party enough to set the moor alight.”

“Don’t listen to him,” Naomi said. “Tynan, take her coat. We’re having a drink here while we wait for a couple of the other girls to arrive. What’s your pleasure?”

“Lime and soda if you have it.” She smiled when Tynan helped her out of her coat.

“Forget that.” Talia ushered her onto the sofa. “No soft drinks allowed tonight. Unless you’re allergic or sworn off alcohol on religious grounds. No? So, what’ll it be?”

“White wine would be good.”

While Caleb went across to the drinks cabinet, Talia sat next to her on the sofa. “Love your dress.”

“Thanks.” Erin tugged the skirt of the simple navy shift down to her knees. “Naomi said I had to wear something good.”

“I said something sexy.” Naomi plunked herself on Erin’s other side and eyed Erin’s dress. “I would have preferred more of a cleavage,” she said in a hushed tone that only the girls could hear. “But I’m not complaining.”

Grateful, Erin took the drink Caleb handed her and took a healthy swig. Conversation turned to logistics regarding transport for the evening, with Tynan and Caleb sitting side by side on the opposite sofa. Good Lord, Erin thought, taking several surreptitious sips of her wine. The room positively hummed with masculine appeal. She couldn’t remember ever seeing two more intimidating men in her life, or two more attractive and virile, but while they seemed tough and formidable, she didn’t feel especially uneasy in their company.

It was apparent from the looks and smiles the men each shared with Talia and Naomi that there was a whole bucketload of love in the room. In their men’s presence, the women seemed relaxed and completely at ease with themselves. Erin wondered how that must feel, considering her own experience had only ever been one of fear and intimidation.

The sound of the front door closing and heavy footsteps pounding down the hallway brought Erin from her reverie before she could take a painful trip down memory lane.

If she’d thought the testosterone levels couldn’t rise any higher, she hadn’t been prepared for the man who stepped into the room. Built like a tank, his shoulders filled the doorway, while the heavy scowl pushed the first real fluttering of fear into her since she’d arrived.

“If you expect me to drive that piece of garbage, you could have at least washed it first.”

The deep timbre of his voice and the edge of vitriol in his tone caused Erin to slink down a little in the seat, but since his attack was aimed at Tynan, she tried to steady her breathing. Her heart hammered anyway, her mind scanning back to a time when a similar attack was aimed at her.

“You want me to fill that junk trap with gas for you? Then you’d better make it worth my while by getting on that bed and spreading your legs for me. Now.”

Erin looked down, surprised when she saw the damp patch on her dress. Bloody hell, her hand had shaken so much that she’d spilled her drink.

She looked up into the dark, steady gaze of the man who had just arrived. He eyed her with little interest, but her stomach jumped like a train.

“Here.” Talia mopped at Erin’s dress, then turned her glare on the man. “Why did you want to come in here and scare my guest, Nathan Quinn?”

“Didn’t know anyone else was here. Thought you females had left for the evening.”

Another pointed exchange of looks, but Erin knew she was reading too much into everything right then. They must all think she was a bloody loony.

The man called Nathan turned his gaze to her and inclined his head.

She tried for a smile but wasn’t sure she made it. Her whole body was reacting as if to a threat, and she feared she was about to go into full panic mode.

“Well, let’s get this show on the road,” Naomi declared and stood. “I can hear the others arriving, which means we’ve got that serious partying to do. And you guys have some serious poker to play.”

She took Erin’s glass and handed it to Tynan, then kissed him full on the mouth. “That should keep you for a while. Enjoy your game.”

In response, Tynan put the glass down and hauled Naomi up against him. “That won’t keep me for five damn minutes. Come here.”

Erin felt she should turn away when the kiss morphed into the kind that required locked doors and darkened rooms.

“Don’t mind them,” Talia said drawing her into the hall where Caleb held out their coats. She turned to her husband. “You’re really sure you don’t mind driving us? We can get a cab if it’s easier, then you can drive to Truro with Ty and Nathan. That way you’ll get to enjoy a drink.”

“I said I’d take you. I don’t want you out of my sight any longer than necessary.”

The big man smiled down at her, his eyes gleaming. Talia rewarded him with a soft kiss, her palm resting lightly against his cheek.

While Caleb didn’t haul Talia against him to give her the same treatment Tynan was currently giving Naomi, Erin felt equally uncomfortable. The possessive look Caleb gave his wife made her feel like she should turn away from something intensely private and intimate.

Naomi came into the hall, flushed and pleased with herself. “Ready?”

Moments later, after brief introductions to the two women who had arrived, they were piling into Caleb’s SUV. From the backseat, Erin found herself glancing back to the house, hoping against hope she didn’t catch sight of Nathan again.

The man made her feel uneasy and anxious. They’d barely shared a glance, but he’d looked at her like he knew something nobody else did. She shuddered at the thought, remembering Naomi had told her that Tynan was his business partner, and they were security consultants. That meant he would know how to access official files, documents, people’s history.

At Naomi’s instruction beside her, Erin clipped on her seat belt and vowed to keep a very low profile where Nathan Quinn was concerned.

Faye Avalon enjoys writing sexy stories about strong men and the savvy women who rock their world. She has taken a roundabout journey toward her writing career, working as cabin crew, detouring into property development, public relations and education, before finally finding her passion: writing spicy romantic fiction.

Faye lives with her super-ace husband and one beloved, ridiculously spoiled dog. They regularly expand their family by boarding puppies destined to become guide dogs. Between writing, reading, running around after manic puppies and grabbing some quality time with her husband, Faye enjoys a challenging yoga session or a night at the movies.