My Other Passion (#hotrod #vampire #eroticromance)

Hi, I'm G.D. Ogan author of the Immortal Relations adult paranormal-romance series which I've loved writing. I also love reading all types of books but mostly histories and paranormal (vampire) stories. More about the books I write after I show you my other passion, which I indulge when I am not reading and writing—my vehicles. 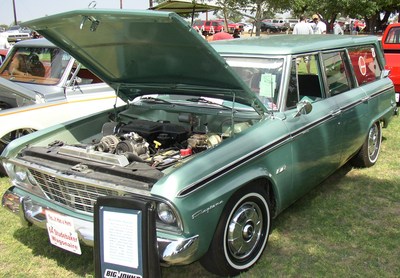 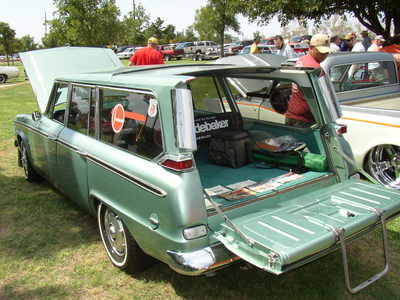 First up is my 1964 Studebaker station wagon called a Wagonaire because the rear top slides forward turning it into a truck to carry tall items. The roof is only partially forward in this picture; however, with it all the way forward I've had six ladies standing up in the back during a parade. Safety and reliability are important so while it looks all original from the outside we installed four-wheel power disc brakes and power steering along with a more modern computer controlled 5.7Dodge Hemi engine, five-speed automatic transmission and modern suspension. These pictures are from Vernon, Texas where they have a "Last Blast of Summer" car show and cruise through the town usually the last week in August (rather hot)! I'm planning on doing at least part of the Hot Rod Power Tour 11-17 June (depending upon the weather which hasn't been good - floods now in the coastal regions and some central parts of Texas). I love to take it to car shows because there are only a very few of this year and model still left. 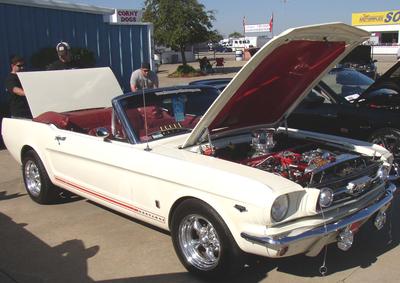 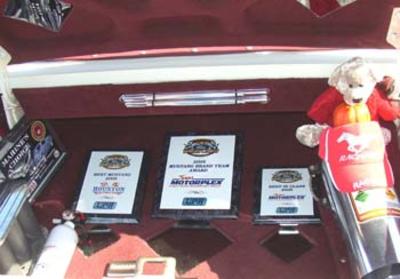 Next is my 1966 Mustang Convertible. It has been modified with a more powerful engine and transmission with modern suspension and disc brakes up front - they are non-power so I have to push down harder. It does have power steering and the pony interior has been re-dyed back to the original dark red color. These first generation Mustangs are still available; however, they are getting harder to find in the Convertible model. The pictures are from a "Fun Ford Weekend" and its trunk holds a few of the awards it has won at the Fun Ford Weekend events. 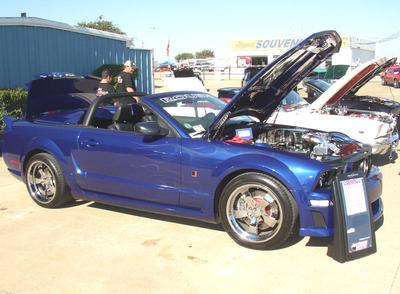 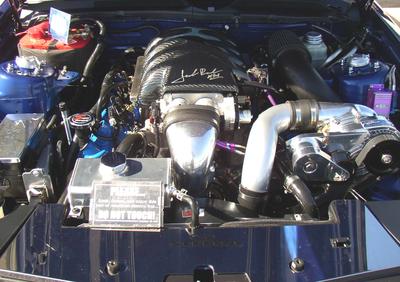 Third up is my 2005 Roush-Mustang Convertible, which has been taken to a whole new level with a Supercharged-Livernois-Stroker Engine, a TR-6060 six-speed transmission and McCloud Twin Disc Clutch with more capable Baer Brakes up front. This is a pussycat as long as it is kept under 3,000 rpm where the boost is docile but then it turns into a Lion when the accelerator is depressed. It has a lot of suspension modifications along with extremely "sticky" Pirelli racing tires. I've had it on a road course a couple of times where it proved itself very well - now it is just for cruising and an occasional car show. Both it and my 66 were featured in Musclesport Mustang magazine some years ago.

As for me, I'm no longer a "Spring Chicken". I am a retired USAF Major where I had the opportunity to be stationed in many parts of the world. I'm also retired from working at the Texas Department of Criminal Justice writing treatment materials for prison inmates with addiction problems that often resulted in them getting into criminal activities and as an Associate Clinical Psychologist doing "intakes" on inmates. My wife and I are ardent dog lovers having had mostly Pomeranians (we still have one 15 and one 8 years old). Our adult children have a number of large, lovable (if rambunctious) rescue dogs such as pits and bulldogs - they live in other parts of Texas so we don't get to see them (or the grandchildren) as often as we would like.


Now for the more "commercial" comment: If you are interested in reading a totally unique vampire series where those who were turned against their will refused to abase themselves by becoming the blood-thirsty "Bram Stoker" type of vampires. Rather they safeguard innocent humans and animals from evil then you'll enjoy reading my "Immortal Relations" (adults only because of what I call explicit togetherness). Each book is a stand-alone story - no cliff hangers and the vampires don't sparkle. For those who would like less sex in their reading, they can start with book two as it has a short summary of the most important action of the first book in the first part as a conversation between the hero and one heroine. 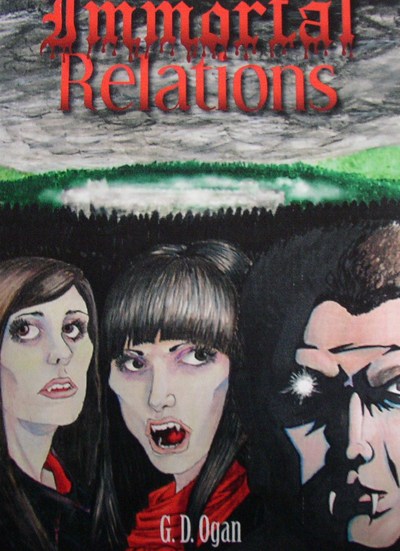 When Gary Logan discovers an old black-and-white photograph of his father in Prague with a woman’s handwriting on the back, he flies there to investigate where his father worked only to meet and fall in love with a beautiful lady who he believes to be a vampire. In love with her, Gary is initiated into her coven of guardian vampires, beginning an extraordinary journey of epic proportions.

Exciting, erotic, and full of heart-stopping action, Ogan’s debut novel turns human vampire lore on its head, creating a symbiotic relationship between the two species that deepens emotional connections to astonishing effect. But a coven of evil vampires bent on destroying the guardian vampires and feeding on the humans at will have other plans. Adam, however, assists humans in almost wiping out the evil coven, beginning the ever-increasing relationship between vampires and humans. Gary and Adam then save Great Britain from nuclear theft and attack; when their nemeses make one last-ditch effort in Russia to bring all of the peaceful societies down, Gary, Adam, and their coven must save the human species before their enemy’s plans can come to fruition.

Probing the gray areas inherent in sexuality, family, and legend, Ogan weaves an amazing tale that examines the very nature of existence. An unrelenting thrill-ride of passion and action, Immortal Relations will leave you breathlessly awaiting the series’ second installment.
Sound interesting? Get your copy of this and the other two books in the series here:

Immortal Relations
http://amazon.com/dp/B006ZCBT6G
Now $.99 digitally on Kindle and available in print through Amazon at higher price.

Immortal Relations, Love and War
http://amazon.com/dp/B00A4IEHL6
$.99 on Kindle and available in print through Amazon at higher price.

Immortal Relations Coming Out
http://amazon.com/dp/B00G5BQS18
$.99 on Kindle and available in print through Amazon at higher price.

I REALLY enjoy responding to commenters, bloggers and potential readers who have any questions or comments so please feel free to do so!

Welcome back to Beyond Romance, Guy.

Those are some hot cars! If your books are anything like that...!

Thanks Lisabet! We've had so much rain in Texas this year that my cars have mostly been garaged, except the Studebaker now in the shop to fix its air conditioner. The Louisiana and coastal regions of Texas are flooded so I'm sadly not going the whole Power-Tour but plan to join in Grand-Prairie, near Dallas and just do the Oklahoma City leg of the tour (weather permitting).