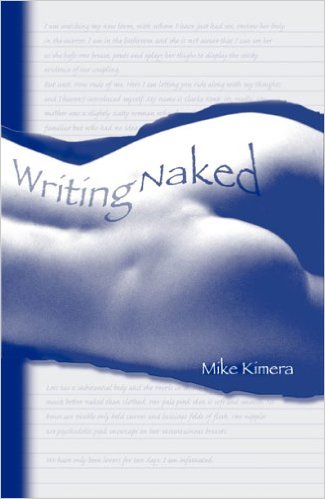 What is the essence of erotica? There are as many answers as there individuals - readers and writers. Erotica is writing that arouses the reader. Erotica is words to wank to. Erotica celebrates our sexual selves. Erotica is escapist, letting us experience vicariously the fantasies that we can't fulfill in real life. Erotica is political and subversive, writing that challenges the dominant cultural view of sex as something shameful, sinful, and evil. Erotica is personal and psychological, exploring the sexual sources of human conflict, motivation and emotion. Erotica is transformational, leading us to new visions of our sexual selves.

Mike Kimera has stopped writing and publishing under that name. In the days when I knew him, though, he used to wonder in his blog postings whether what he wrote should be called "erotica". Based on the sampling of stories in his stunning collection, Writing Naked, I don't think there is any doubt. Mike writes graphic, honest, revealing, and sometimes painful tales about believable and mostly sympathetic humans in the grip of sexual desire. Writing Naked is bold and arousing. At the same time, it delves deeper and exposes more of the psychological realities of sex than most erotic writing.

If there's one theme that unites the stories in Writing Naked, it is the concept that intense sexual desire is somehow foreign, inscrutable, uncontrollable, and irresistible once it is given free reign. Kimera's characters do things they know they will regret later, burning as they do in the superheated furnace of lust. In the brief but totally arresting "Happy Hour", a character muses:

"I wonder how many other women have sweated and moaned their way to slick release upon the tightly woven beauty of this rug? In the beginning I thought it a magic carpet, carrying me to
new heights; I rode it while Gerald rode me. Now I realise that both Gerald and I have been abducted by some poltergeist of lust. We are now so high we can find no way to reach the ground."

"This thing we have, whatever it is, is not friendship, or love. It doesn't make us stronger or better. It consumes us. We are burning in each other's arms.

"I hope that when the fire goes out we will not be hollow."

"I felt like an alcoholic who everyone thinks is sober; the fact that he isn't drinking doesn't mean he's sober, it just means that he's managed not to be drunk today. Every day that I refused to listen to the wilder side of my nature was a victory, but I didn't expect to keep on winning forever."

It may sound as though Kimera's stories are dark, and many of them are. I couldn't read the two hundred pages of this book in a single session; the emotional impact was just too overwhelming. However, there are gems of raunchy humor in this collection, most notably the tongue-in-cheek "Friday Night at the Adult Bookstore", the delicious fantasy tale "Go Large", and the truly inspired "Mating Calls":

"I made the mistake of phoning Kyle, my most recent ex, to ask him if I was a noisy fuck. Cue one fucked up conversation.

"'Babe,' he said (I hate being called babe and he knows it), 'when we fucked, I only knew you were awake because you made no noise. As soon as you fell asleep, you'd start snoring.'

"'Oh, yeah?' I replied (okay, so I'm not always calm on the phone). 'Well, the only reason I knew I was awake when we fucked was because sex was always fun in my dreams.'"

There are also a few stories of sweet redemption through the flesh. "Newton's Laws of Emotion" traces the emotional tectonics that bring a woman scientist to the point of introducing her artist husband and her physicist lover. "Eve's Freedom" is a simple tale about the healing power of love, even when unrequited. And the lyrical "Tiger Tiger" reaffirms that even when we don't will or comprehend it, there may be something transcendental about sexual union.

Mike pretends to distance himself from his characters, to survey their actions and unflinchingly report their foibles. His bio notes that he took a degree in psychology "out of sheer self-indulgence". He likes to assume the pose of the analytical observer, the chronicler of lust. It's just a pose, though. He cares about his characters far too much to be a clinician.

If you're looking for light entertainment, no thought or emotion required, then skip this book. On the other hand, if you're ready to experience desire in all its complexity and intensity, don't miss it.