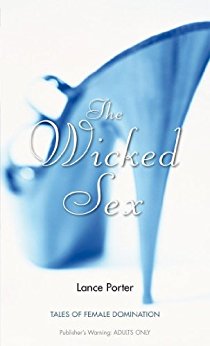 The first story in the collection, “Bound by a Woman”, is the worst. Gunther is a middle-aged German restauranteur who is waiting to meet his gorgeous Asian mail order bride. Bee, the bride, turns out to be a cruel and self-centered creature who, when she discovers that he's not as rich or young as she had hoped, binds Gunther with her stockings, stuffs her panties in his mouth, and hangs him from a hook on the wall of his apartment while she goes out shopping on his credit cards. Eventually she screws his younger and more virile neighbor, and then leaves, with Gunther still dangling from the hook.

Bee treats Gunther despicably, not because it arouses her, or him, but because she's angry with him and doesn't care in the least what happens to him. On the other hand, one can't really feel much sympathy for Gunther (at least I couldn't), who is a chauvinistic liar marrying strictly for sex (and the satisfaction of showing off his Asian beauty to all the German women who rejected him over the years). Since I really disliked both the main characters, how could I get emotionally involved in the story?

To compound the problem, this story in particular had some very sloppy writing, most notably a sudden and confusing shift in POV from Gunther to his neighbor Siegfried during the climactic cuckolding scene. Then there are sentences like the following:

“He roared in response, squeezed her juddering ass cheeks between his clawing fingers and drove himself with ever-greater vigour. “

“Teen Tease”, the second story in the collection, is more tightly written. The narrator is an eighteen year old sexpot who gets her kicks tormenting her ex-gangster step-father and making her ex-stripper mother jealous. The tale offers some sly humor in its images of the narrator and her classmates in Catholic high school, trying to seduce the incorruptible Father John. I also found the unexpected twist at the end quite clever. But arousing? With whom am I supposed to identify? The truly wicked teen narrator, who delights in her cruel power? The disgusting mafioso pervert who drools at her feet? Sorry, but the only person for whom I felt the least concern was the beleaguered priest.
The third tale in The Wicked Sex is entitled “The Land of the Giant Supermodels”. The title says it all. A group of fifty or so men, applying to appear in a commercial with some famous beauties, are abducted to a world inhabited by women fifty feet tall. One by one the men try to escape and meet various horrible fates, until the narrator, the last remaining prisoner, is crushed to death in a supermodel's vagina.

This tale really is as ridiculous as it sounds. Actually, it's rather humorous, and again, has an ending that is more subtle than I had expected As erotica, though, it fails miserably, at least in my opinion.

“Heartless”, the fourth story, is a rather incoherent tale of a young man driven mad by his lust for the woman who spurned him. “Imperatrix”, the last story in the volume, postulates a competition between two dominant woman to see which one can exhaust the most men. In this story, at least, the men are willing participants, well paid to service and satisfy Valerie Sales and her arch-rival Katerina Dominova. The story is fun, if not very original, with a few genuine fireworks set off between the two women. (The men here are no more than animate sex toys.)

The one story that did strike some sparks for me was “Mistress of the Hunt”. This tale, loosely based on the classical myth of Diana and Actaeon, succeeds in evoking an aura of mystery as well as a terrible sense of tragic inevitability. Young, virile Acton is hired to care for Mistress Delia's hounds. He suffers unbearable desire for her chaste beauty, yet at the same time resents the haughty manner in which she wields her power. When he spies on her bathing, she exacts the ultimate in punishment. Mr. Porter manages to suggest that this scenario has been played out many times in the past, and that the future would see new incarnations of the Huntress and her eternal prey. Although the exposition is a bit rambling and Mr. Porter throws in a variety of characters that distract from the central theme, this tale does merit the description “erotic”.

All in all, however, I cannot honestly recommend The Wicked Sex. Possibly a true afficionado of female domination would find something in this volume that I missed. I know from personal experience that if a work of fiction pushes your buttons, you're willing to overlook (or maybe don't even notice) the literary rough edges. Possibly the right reader would finish this book with racing heart and engorged genitalia. I'm certainly not that reader.

Posted by Lisabet Sarai at 6:09 AM

Hmm, I actually have a paperback of this that's been lingering on the shelf forever. Now I'm doubly curious. 'Bound by a Woman' sounds like it sets entirely the wrong tone, but 'Teen Tease' and 'Imperatrix' sound fun, and I love the idea of 'The Land of the Giant Supermodels.'