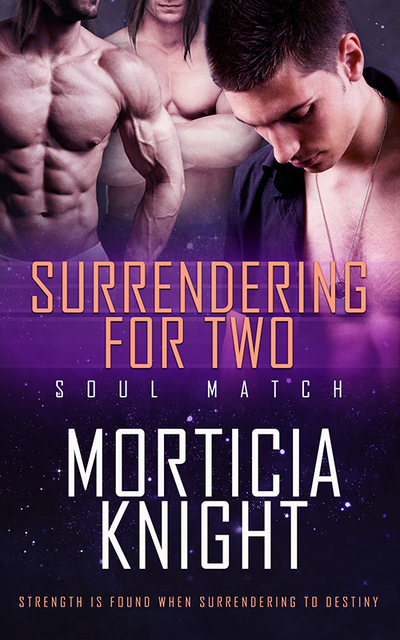 Strength is found when surrendering to destiny.

Graham has suffered way too much at the hands of the Nall. Ever since he was enslaved after the invasion, he’s been raped and tortured by the Alasharian Supreme Commander and his cohorts. Condemned to die by hanging for his part in the human rebellion, Graham gives in to the inevitable, no longer caring if he lives or dies. But an unexpected event occurs and, at the last moment, Graham is saved.

Balor is a guard to the Nall, but he’s also a part of the growing rebellion among the Alasharians. When one of the Nall’s advisors enlists his help in getting a human prisoner to safety, Balor comes to his aid. Startled by the soul match hum that sparks to life when he touches Graham, but unable to do anything about it, Balor is determined to protect his human match at all costs. When Advisor Oman arrives on the scene to rescue Balor as he helps Graham to escape, it becomes clear that yet another alien/human triad is forming—even if Graham may never accept being bonded to two aliens after the trauma he’s endured at the hands of Alasharians.

The time has come to depart to the secret military complex where the human and Alasharian allies will stage their final assault against the Nall and the Void. Families are reunited and others torn apart as they prepare for battle. The allies fear what will become of them all if Chris, the special human Sha Sha Ar has chosen as their spiritual leader, is no longer there to guide them.

Graham lowered his head, remaining silent. A heaviness enveloped Balor and his chest tightened. The hum still hovered in the background, still wove them together as three, but his Ahna Graham’s spirit struggled against the pull. Balor shuddered. He’d be shattered if Graham were to refuse to stay with them. Just having him near to serve or lie with in his arms at night was all he’d ever need.

Graham regarded him with a furrowed brow, his eyes shining. “Kiss me.”

Balor sucked in a sharp breath. “Are you sure?”

Graham’s mouth twitched and the ache in Balor’s chest lightened.

Balor nodded clumsily. If only I was better at the kissing. He’d be lost when it came to anything else. He leaned in right as Graham did until they were close enough to breathe each other’s air. Balor didn’t realize that Graham had released Oman’s hand until he’d brought it up to cup his cheek. His palm was warm, damp with the sweat that had built between his and Oman’s skin.

Graham brushed his lips over Balor’s, the hum building as he licked at his mouth. Oh, magical. He opened up to his Ahna, anxious to taste him for the first time and to share with him the same intimacy he’d experienced with Oman. Balor clutched Graham’s arm when he deepened the kiss, dizzy with how much he desired his mate. His haro lengthened, but remained trapped in the jock of his guard dress.

Graham dipped his tongue into Balor’s mouth over and over, exploring him, angling his head with each thrust as if to sample as much of him as he could. The pressure of Balor’s constrictive clothing against his rigid shaft bordered on the painful. More, Ahna. So good.

The vibration of the soul match intensified and Balor didn’t think he could stop himself from going too far with Graham. He curled his fingers in the soft fabric of the plain shirt Graham wore in the hopes that he could prevent himself from touching him anywhere else. Graham abruptly broke the kiss and Balor let out a gasp, his chest heaving as he tried to regain his senses.

Graham quested beneath Balor’s thick clumps of hair then wrapped his palm around Balor’s nape. The firm grip kept him anchored with his Ahna, the hum retreating a bit from their previous passion, but still awake.

Graham tugged at the scooped collar of Oman’s robe, pulling him closer to them both.

Graham’s voice had rasped out the command and Oman chuckled in response before smashing his mouth to Graham’s. Balor moaned, his mates exquisite in their joining. Graham squeezed his neck while he ravished Oman’s mouth. Balor hadn’t released Graham’s shirt either, and he reached for the arm Oman had curled around Graham’s waist. He laid his hand on top of Oman’s and the moment that all three of them were touching simultaneously, the hum burst to life, knocking the air from his lungs.

Graham tore away from Oman’s kiss, crying out. “Fuck! I need you both, goddammit.” He turned to Balor. “Get out of those clothes. I want to see you, touch you.” Graham licked his lips. “But you can’t touch me. Understand?” 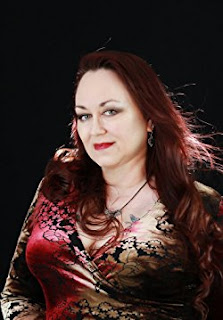 Author Morticia Knight spends most of her nights writing about men loving men forever after. If there happens to be some friendly bondage or floggings involved, she doesn’t begrudge her characters whatever their filthy little hearts desire. Even though she’s been crafting her naughty tales for more years than she’d like to share—her adventures as a published author began in 2011. Since then, she’s been fortunate enough to have several books on bestseller lists along with three series’ titles receiving recognition in the Rainbow Book Awards.

Once upon a time she was the lead singer in an indie rock band that toured the West Coast and charted on U.S. college radio. She currently resides on the North Oregon coast and when she’s not fantasizing about hot men, she takes walks along the ocean and annoys the local Karaoke bar patrons.

Thank you for hosting me Lisabet! :-)