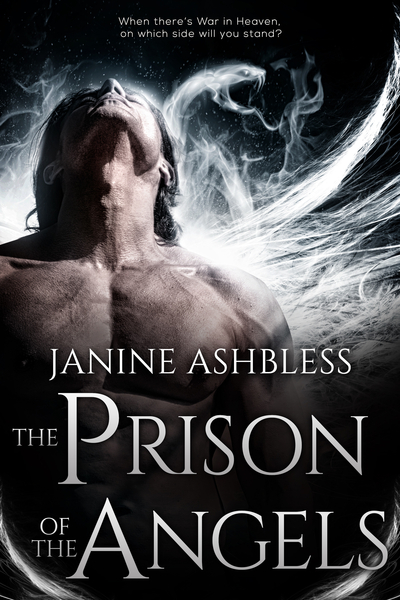 When I first started writing my Book of the Watchers trilogy, all about fallen angels and a love forbidden by Heaven, I promised myself that I would not bottle out of the Big Questions.

Using the Judeo-Christian mythos (angels, demons, Heaven, Hell, sin) is nothing new in fantasy literature, of course – look at The Exorcist, or Buffy, or the Narnia books. It’s particularly common in the Horror genre, but does pop up in Romance too.

But I’ve always had a sort of niggling irritation as a reader/watcher, because the characters almost never address what seem to me the elephants in the room. Like, is eternal torment really a just punishment for the mundanely wicked? Is the standard of “wicked” immutable? - is everyone going to Hell for sins like sex outside marriage or eating bacon? If you postulate an omnipotent, omniscient, perfect God in the Judeo-Christian tradition, how do fictional characters keep ending up in Hell “by mistake”? Why doesn’t God interfere in the action personally? (Yes I know He doesn’t IRL, but in a fictional world where you’ve got supernatural agents who regularly converse with Him, and are battling for the fate of the world, there’s even less excuse for the Problem of Evil). Since God is all-powerful and demons aren’t, shouldn’t an exorcism work every time? (They never seem to…)

Most characters never ask these awkward questions. But if they did, of course, there are various possible answers. Maybe there is going to be a literal Deus ex Machina that will fix everything. Maybe the “good” angels aren’t so good, and are lying about just following divine orders. Maybe God’s senile, like in Pullman’s novels. Maybe this is not really a Judeo-Christian universe with an omnipotent deity, but a Manichaean one in which Good and Evil are evenly balanced and either might triumph in their eternal battle.

I promised myself that my heroine Milja would ask the awkward questions. She’s released a fallen angel from his prison and fallen in love with him — does that make her dammed for eternity? (She certainly worries that she is.) Is all sexual desire sinful? Just the dark and kinky stuff? Why doesn’t God just lock Azazel back up again —why rely on the loyal angels to do that, and frankly what the heck are those angels up to?

And I promised that I’d answer those questions by the end of The Prison of the Angels. Because writing a torrid romance with increasing BSDSM elements and a someone-stop-the-Apocalypse plot was just not enough of a challenge ;-)

I think I damned myself!

Her lover, the fallen angel Azazel, has cast her aside in rage and disgust. The other contender for her heart, the Catholic priest Egan Kansky, was surrendered back into the hands of the shadowy Vatican organization, Vidimus, after sustaining life-threatening injuries.

She has killed and she has betrayed. She is alone, homeless, and at the end of her tether - torn apart by guilt and the love she has lost.

But neither Heaven nor its terrifying representatives on Earth have finished with Milja.

Both her lovers need her in order to further their very different plans, and both passionately need her, though they may try to deny it.

Milja is once again forced into a series of choices as she uncovers the secrets Heaven has been guarding for centuries. But this time it is not just her heart at stake, or even the fate of a fallen angel.

This time, the choices she makes will change everything.

This time it’s the End of the World.

The Prison of the Angels is the third in the acclaimed Book of the Watchers trilogy, following on from Cover Him with Darkness, and In Bonds of the Earth.

Excerpt from The Prison of the Angels

The cold water flashed like white fire over every inch of my skin. It burnt my eyeballs and my lips and the inside of my throat, and beyond the white fire was a darkness so immense that it swallowed me whole.

Something grabbed my wrist. Something so hot that it boiled away the darkness, so that there was suddenly light flashing in my eyes. I felt myself grabbed up bodily and lifted. I felt heat against my lips, blowing fire into my frozen lungs. I saw the wooden posts of a flight of steps, and then I pitched forward onto hands and knees in the shallow snow, choking up pond-water. In front of my blurred vision an inchoate swirl of darkness poured up the steps onto the lit porch and then disappeared. Unseen, something slammed against the door, a knock that made the house shake.

I was on the ground beneath the back porch of John’s house, I realized, shuddering.

Mama. Oh Mama. The thought seemed to come from nowhere.

Three times the knock sounded, and on the third the door burst open—outward, onto the porch—to reveal Egan in the lit room within; shaven, shirtless, and frozen mid-lunge for what I could only assume was a weapon of some sort.

I tried to cry out.

Grabbing his pistol he ran out barefoot onto the porch and looked around for enemies that were not there. Then he clattered down and pulled me up into his arms. I pressed my face to his neck and he carried me up the steps and over the threshold—not like a bride, but like a child he could hold tight against his torso, his wrists locked under my thighs. His skin blazed against mine. He hefted me into the kitchen and propped my ass on the table in front of the range.

“What the hell?” he demanded in a low fierce voice, sweeping locks of sodden hair back from my face. My hat seemed to have disappeared. “What happened, Milja? What were you doing out there?”

“Ice. I fell in the lake.” My jaw chattered. It was obvious I was telling the truth—I was soaked from head to toe, and after clasping me so close he wasn’t much drier himself.

“Feckssake, woman!” he growled. “What the hell were you thinking of?” He shucked off my coat, which lifted a sodden ton from my shoulders, then stooped to pull my boots off; ice-water spilt all over the floor.

I tried to strip off my gloves but my fingers weren’t capable of gripping anything.

“Come here, come here,” he said softly from where he knelt at my feet, grabbing my wrists and peeling away the useless gloves. He pressed my hands on either side of his warm neck, holding them there. They must have felt like ice-blocks to him, but he didn’t wince.

He looked like a knight kneeling before his queen, I thought. I could feel his pulse.

“I’ll go get towels, Milja. Are you going to be okay a sec?”

I nodded, though he probably couldn’t see it through the shuddering. He rose and hurried off, leaving me with the radiant warmth of the stove. I thought I should probably get the rest of my clothes off, but even after I struggled with my fly zipper my jeans seemed determined to cling to my bum-cheeks.

I heard the back door bang shut and I flinched.

Had he been gathering himself to come get Egan? Was he the one who had saved me from the black waters? Where was he now?

Egan came back in carrying armfuls of towels. “Alright?”

“I’m okay,” I told him, smiling through my shudders. He was still shirtless, and I could see the faint Ethiopian scars on his arm and chest.

He wrapped my hands one at a time in a towel, chaffed them dry, and then set them deliberately against the hard, hot wall of his torso.

Then he slipped all the buttons on my thick flannel shirt—the one I’d chosen this morning precisely because it wasn’t provocative or distracting—and he only slowed when he realized I was wearing just a bra-top underneath. My nipples stood in shamefully hard points under the stretch cotton. I tried to wriggle out of the long tartan sleeves of my shirt on my own, to spare his blushes, but everything clung like a freezing cold second skin and he had to help.

The shallow slash on my forearm wasn’t bleeding anymore, but each brush of his fingers felt like hot coals.

My wet garment made a slap as it struck the floor.

He draped a towel around my shoulders and another over my head. He started rubbing the water from my face and hair and scalp, his movements precise and gentle. For long moments I was buried in a soft darkness. I reached out, blind, to put my hands back on his bare ribs. I could feel his heart pounding beneath them, like a beast pacing a cage.

I have no idea when it all changed for him. When his grueling self-denial simply fell apart, like a garment worn and washed until the fabric was weakened beyond all use. All I knew was that he dropped the towel off my damp head, cupped my face in both his hands and—absolutely without warning—kissed me. 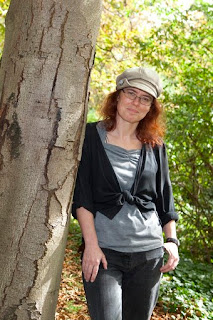 Janine Ashbless is a writer of fantasy erotica and steamy romantic adventure. She likes to write about magic and myth and mystery, dangerous power dynamics, borderline terror, and the not-quite-human.

Buyer beware! If you like dark romance and a hard-won Happily Ever After, try "Cover Him with Darkness," "Heart of Flame," or "The King's Viper." If you prefer challenging erotica, go for "Red Grow the Roses" or "Named and Shamed" instead. All her other books lie somewhere on the spectrum between.

Janine has been seeing her books in print ever since 2000. She's also had numerous short stories published by Black Lace, Nexus, Cleis Press, Ravenous Romance, Harlequin Spice, Storm Moon, Xcite, Mischief Books, and Ellora's Cave among others. She is co-editor of the nerd erotica anthology 'Geek Love'.

Born in Wales, Janine now lives in the North of England with her husband and two rescued greyhounds. She has worked as a cleaner, library assistant, computer programmer, local government tree officer, and - for five years of muddy feet and shouting - as a full-time costumed Viking. Janine loves goatee beards, ancient ruins, minotaurs, trees, mummies, having her cake and eating it, and holidaying in countries with really bad public sewerage.

Her work has been described as:

"Hardcore and literate" (Madeline Moore) and "Vivid and tempestuous and dangerous, and bursting with sacrifice, death and love." (Portia Da Costa)

GIVEAWAY!
Make sure to follow the whole tour—the more posts you visit throughout, the more chances you’ll get to enter the giveaway. The tour dates are here: http://writermarketing.co.uk/prpromotion/blog-tours/currently-on-tour/janine-ashbless-4/

Thank you for an amazing post, Janine. The whole series has been on my to-read list for... well, ever since I read the excerpts from Cover Him with Darkness. Each installment sounds more intense.

Hope the tour goes really well. Off to announce it to my readers!