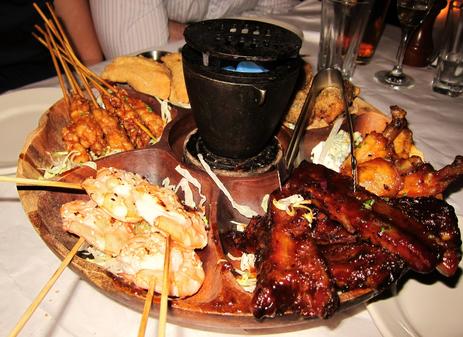 If I were looking for a logo, I might choose a Pu Pu Platter.

Do any of you remember those pseudo-Polynesian appetizer assortments, complete with the fiery wrought-iron cauldron in the middle to heat up all the finger food? Do they still exist? When I went searching for images on my favorite stock photo site, I came up with zero hits. Are PuPu Platters totally passé? Have they gone the way of granny glasses and lava lights?

Modern concerns with healthy eating have probably played a role in the platter's demise. It's difficult to imagine a more fat-and-cholesterol intensive repast than the traditional fried wonton, crispy egg rolls, barbecued spareribs, battered giant shrimp, cheese-filled crab puffs, and all the other delicacies that might show up ranged around the flaming Sterno. One PuPu Platter can undo weeks of toil at the gym.

But God, how I loved them! Indeed, I recall that on my first real date, my companion (with whom I was highly enamored) ordered us one. This may explain my lingering fondness; PuPu Platters are somehow mixed up in my mind with sex. (Not that I had sex on my first date, of course, but a teenager's hormones color everything in her world). And there are some similarities, after all. A PuPu Platter is decadent, all luscious flavor with little food value. You devour the components with your fingers and lick off the juices afterward. And you can't eat one all by yourself. PuPu Platters are made to be shared.

The real attraction for me, though, is variety. (I also adore mezze plates – Middle Eastern appetizer assortments.) A taste of this, a hint of that, never enough of any one dish to be bored – that's what I love. Diversity is my ideal in life. I want to sample a wide range of different experiences, rather than being forced to choose one dish, one path, even one person – although I have been married to the same guy for more than thirty years. (He likes variety, too.)

I’m proud of my books. I like the challenge of tacking new genres as well as new forms. However, lately I’ve started to believe that diversity can be a liability to an author’s career. When someone asks you what you write, “almost everything” may not be a strategic answer.

I couldn’t think of any really popular writers whose books vary as much as mine do, from one to the next.

Meanwhile, my favorite authors are the ones who can write anything – and do. M.Christian comes to mind as maybe the best example. I’ll devour anything by Kathleen Bradean/Jay Lygon. Jonathan Lethem’s wild imagination produces something different in every offering. And though I haven’t read anything by him in a long time, John Barth used to delight me with every book I read. I never knew what to expect – and that’s the way I liked it.

I guess I have to accept the fact that the majority of readers does not value variety to the extent I do. Instead they are seeking predictability – the antithesis of enjoyment, from my perspective!

This is a bit depressing, if I allow myself to dwell on it.

Am I willing to focus on one sub-genre in order to become popular? If I were making my living as an author, I think I’d have to. Fortunately, I have the luxury of writing what I feel like – of indulging my love of diversity.

Now all I have to do is find readers with similar tastes.

Posted by Lisabet Sarai at 8:54 AM

Thanks, Colleen! Probably most of the people on my (relatively small) mailing list have similar preferences... or they wouldn't have signed up.