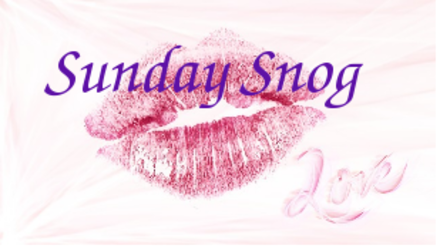 My snog today comes from my steampunk-menage-BDSM-shifter novel, Rajasthani Moon. In case you’re not familiar with this outrageous story, here’s the blurb:

Want me to enter you in a drawing for a free copy of this book? Just leave me a comment below (including your email!), telling me what you think of my snog!

And when you’re finished here, head over to Victoria Blisse’s SundaySnog page for more sexy kisses. 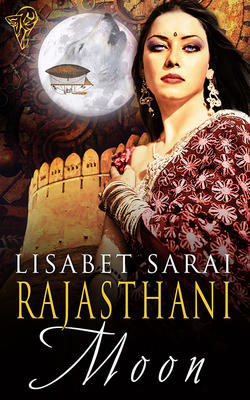 Morning sun filtered through the latticed windows, the intermittent light adding new patterns to the intricately-woven carpet. Cecily stirred in the nest of cushions Amir had scattered upon the floor at the foot of his bed. She stretched her bondage-stiffened muscles, wincing as embroidered satin abraded her punished backside. The Rajah’s spanking appeared to have irritated the welts from the flogging administered by his brother. What a pair of deviants!

A short chain tethered her ankle to the massive mahogany bedstead. Otherwise she appeared to be free—not counting, of course, her deadly collar. Rising to her knees, she peered at Amir, who lay careless and relaxed in sleep upon the fine linen sheets. With his eyes closed, luxurious lashes brushing his smooth cheeks and full lips slightly parted, he looked boyish, fresh and innocent. How appearances could deceive!

Was he merely feigning sleep? Cecily scrutinised his naked form, studiously ignoring the tell-tale swell below his waist. She could not detect the slightest evidence of tension. His gloriously-muscled chest rose and fell in a slow, regular rhythm. She held her palm above his luscious mouth and felt the warmth of his breath upon her skin. A faint aroma of almonds hung around him. She recalled the scented oil with which he’d greased her rear channel and shuddered, half disgusted, half aroused.

For the moment, the Rajah appeared to be in her power. Cecily knew many techniques for quickly and efficiently terminating a man’s life, without the need for excessive force or blood. It would be quite simple to eliminate this enemy of the Empire.

The train of thought came automatically, a consequence of her training. She dismissed it as impractical. She would still be a prisoner, and a proven assassin rather than merely a seeker of intelligence. Besides, what purpose would such a murder serve? Amir was far more valuable to her alive, as a source of information.

Underneath all her rationalisation, Cecily was keenly and shamefully aware of the fact that she could never kill this man—no matter how vicious or dangerous he might be. He had a hold on her, far stronger and more difficult to escape than his silvery chains. Her quim was still tender and raw from the effects of his infernal instruments—his sparks, his clamps and his cock—but she felt herself moisten as she gazed on his slumbering beauty. In his presence, what she truly wanted was to give in, to have him use her like the helpless captive she was.

Helpless? She shook her head as if to scatter her offending thoughts. What was wrong with her? Had the Rajasthani ruler cast some sort of spell over her? She should be focusing on escape. She might not have ferreted out all the Rajah’s secrets, but already she knew much that was of value. Furthermore, if she managed to get out of the palace, she could disguise herself and engage in some additional sleuthing…

“Good morning, pet.” Amir’s piercing eyes fluttered open and pinned her gaze, while his lips curved into a self-satisfied smile. Any semblance of innocence fled. “Did you sleep well?”

“I’m not your pet. Furthermore, I scarcely had a comfortable moment all night, due to the after-effects of your tortures.”

“Tortures? Please! Based on your reactions to my little games, I don’t think ‘torture’ is exactly the appropriate term, my delectable spy.”

He reached up, grabbed her shoulders and pulled her down on top of him.

“Ow!” Cecily began as the chain bit into her skin. His voluptuous lips sealed off any further commentary. She wanted to struggle but his arms were steel bands confining her. Her breasts mashed against his solid chest, the nipples plump and swollen as grapes, while the sweet rigidity of his cock poked into her from under the sheet.

It felt far too pleasant—outrageously so. Amir prised her mouth open and probed deep with his brazen tongue. She could not help imagining that tongue rooting in her cunny. Desire shimmered through her as she opened to him, savouring his flavour of cinnamon and fennel.

Clearly he sensed her surrender. He released his hold on her torso so that he could trace her bountiful curves, down over her hips to her buttocks. Seizing two handfuls of her opulent flesh, he ground his cock against her mound. His fingernails scored her arse and woke twinges of remembered pain that only fanned her need. Awkward because of her chains and his still-tight hold upon her, Cecily tried to spread her thighs, so that his erection would provide more direct stimulation. The sheet that separated their flesh was soaked by their pooled secretions.

She wanted to roll away, so that they could remove that barrier. Amir held her fast, determined, perhaps, to frustrate her, while he continued to ravage her mouth with astonishing ferocity. Even Cecily’s well-honed muscles were no match for his strength. She gave up, closed her eyes and allowed him do whatever he pleased. For now, at least, he was in control—and if she was honest with herself, she didn’t mind.

Don't forget to leave a comment to enter the drawing!

*fanning self* Oh my! I think I might need a shower now. A cold shower! *sigh* Thank you for sharing. This will give me pleasant dreams as I am off to bed soon. pansyparsons at hotmail dot com

I love your Sunday Snogs. I look forward to opening it every Sunday. The snippets and excerpts give me books to look forward to reading if I haven't already.
Thank you for the wonderful contest.
orelukjp0 at Gmail dot com

I always wanted to read this one. Wow, it is hot!
debby236 at gmail dot com

Love the snogs Lisabette! I've had this on my TBR for a while. The steampunk aspects drew me right in :)
nikkivanderhoof@gmail.com

this has caught my attention, wish to read so much more....nice start

Thanks for dropping by and sharing your opinions!