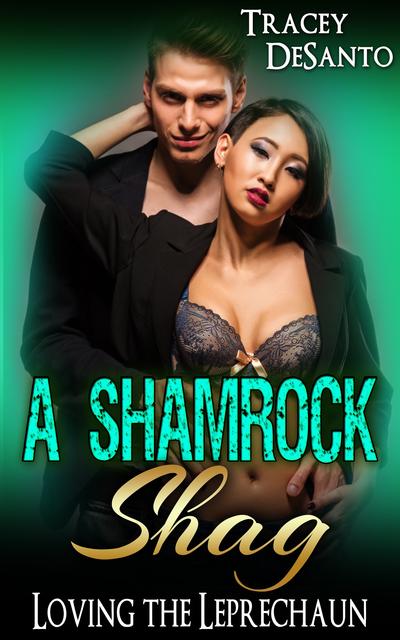 Greetings. I am Tracey DeSanto and I’m a lucky smut-writer. My editor is a woman of vast intellect and sexuality. I call that a win! The problem is… I dwell in the fantastic. I have no fear of the odd or the unusual in my saucy stories. I enjoy spectral sex, and clown love, and zero-g, sci-fi shenanigans. When I told my editor that I was going to write a book about leprechaun love, she frowned at me.

“You always have to go weird,” she told me. “Leprechauns are not sexy. That’s not what readers are looking for. If you do leprechaun sex… you better make sure it’s screaming hot.”

Challenge Accepted! The Fae Folk were calling me and I was powerless to resist. What I had in mind was meant to be sexy. I mean… I choose to write erotica. I have a dirty, nerdy imagination. I wrote A Shamrock Shag: Loving the Leprechaun and sent it along for her scrupulous ministrations. In the end I can only hope she did some one-handed editing.

This is a paranormal Fae story, with sex, where the ancient and the modern collide. It smells of the meadow and car exhaust at the same time. It tastes like Guinness and feels like someone is grabbing your ass. And… perilously… it begins as a fling yet offers all the possibility of becoming so much more.

Connie Woo is a feisty woman who is having a rough day. After dumping her boyfriend (and dumping a pitcher of beer on his head), she ends up colliding with a new man. Michael O’Malley might not be tall, but he sure is sexy. He’s also fantastic at giving her the toe-curling orgasms she desperately needs. The weird thing is, Mike made a joke about being a Leprechaun and it just might be true. Connie laughed at first, but then strange things started to happen. Suddenly it looks like this fit and funny ginger is going to have to grant Connie three wishes. The first wish will be for for a marathon sex session, but what about the other two? Can a girl and a Fae find love together in the big city? Find out in A Shamrock Shag - Loving the Leprechaun by Tracey DeSanto.

"Molly, please... a round for my friends in the band," he cried. There was a smattering of applause. "Actually..." he continued, "A round for the house, my dear, for tonight I dance with with the most beautiful girl in the world!" The room erupted with a roar of approval as Mike threw a handful of what looked like gold coins onto the bar. Taps began to flow. Irish fiddle music began to play with a rollicking and joyful beat. Mike O'Malley held out his hand to Connie Woo. She took it and accompanied him to centre of the room.

Side by side, they began to dance.

They hopped and kicked in perfect complement to each other. She gave no thought to what her feet were doing, but they were putting on a hell of a show down below. Her gaze was fixed on her lover's face. There was honest happiness radiating from him, and a dash of covert mischief. They swung and swayed and kicked together, up and down the length of the room. The folks in the bar thumped and clapped along to the music, encouraging them.

Connie released his hand and began to dance a circle around Mike, clapping in time with the music while she eyed him sensually. She gyrated her hips, remembering the night before. Was it possible he was blushing? The Leprechaun tapped out a perfect beat against the floor with his shiny black shoes and followed her looks, eyeing her lasciviously. His glance made her feel sultry and naked, and she loved it.

The crowd hooted. "Arm in arm and row on row…!"

Michael locked arms with her and they spun circles together.

The patrons in the bar paired up to join in the dance. The world was becoming a surreal place. From her perspective, she was at the axis of the room, which revolved around her. Mike O'Malley was the lynchpin that held it all in place. He beamed at her as they danced. His cheeks were pink and his freckles showed stridently. Connie realized she was grinning and could not stop. The music swirled potently, empowering their movements. Plucked strings and thumping feet evoked a primal and ancient magic. Connie realized that she and Mike clutched each other in near-penetrating closeness. Their feet moved together, almost a blur of perfect symmetry.

"All for Connie's wedding...!" the friends and family at the bar chanted at the top of their lungs.

The two lovers joined together for an electric kiss, causing plenty of sparks. They clutched and danced in perfect time. Connie revelled in the sexual fires being stoked deep within her. She could feel Mike's erection against her through his jeans. It might have made her wobbly if not for the magic of the dance. They consumed each other, tongues and hands roaming while their feet danced perfectly, almost independently. A heady throb subsumed her perceptions, crowding out all other thoughts. The crowd roared and moved with them. All was chaos and joyous celebration. Time stood still. Did they dance for a minute or an hour or a day? Connie didn't care.

The world reverted to "normal" as the music came to an end. The crowd clapped and whooped as reality descended upon her.

"Wait." she wondered, "Did they just sing 'Connie's wedding'?" She resolved to add it to the list of bizarre and uncomfortable conversations coming with Michael O’Malley.

You could win a copy of A Shamrock Shag, to help you celebrate St. Patrick's Day! Just leave me a comment answering the following question:

If you captured a sexy ginger leprechaun and he owed you three wishes, what would they be?

Don't forget to include your email address!

Special deal to celebrate St. Paddy's Day! Get the book for only 99 cents! 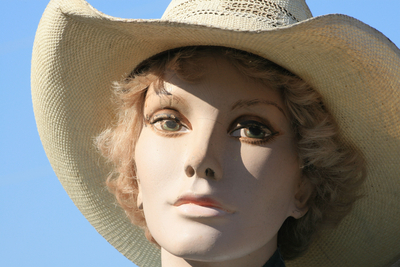 Tracey DeSanto writes dirty stories that take place in fun settings. Her short fiction is literate, entertaining, and unashamedly smutty. Tracey creates positive tales that are hot for women and men of all sexual stripes, never forgetting that a dirty story must also be a good story. Her writing may benefit from a dash of romance, but in a DeSanto book you will not find meandering plots about love-lorn soulmates. You will find a sharp, fun-filled, steamy read.

While enjoying a life that brims with genre fiction and nerdy pursuits, Tracey intends to visit her favourite realms and “have sex” in them. She’s been writing since the fall of 2015 and has, so far, visited the old west, the circus, a fantasy gaming table, a leprechaun love affair, and a werewolf saga. You can expect space ships, super-hero love, and ghost stories. The sky’s the limit, as long as it is smutty.

Tracey DeSanto was born on a space station and raised by wolves. Then she was sold to the gypsies. She is a teller of tales, a spinner of yarns, and she might just be a witch. In other words… Tracey DeSanto is a pseudonym, like every other erotica writer in the universe. Gramma wouldn’t understand, and she misses nothing.

Tracey does not live in New England with two cats… but she just might live in Canada with a big, goofy dog. She is very proud to be a member of the eXcessica author’s co-op.

Thanks so much for livening up St. Patrick's Day here at Beyond Romance. Love your cover! The leprechaun looks like he's full of tricks!

Top of the mornin', Lisabet!

Thanks again for hosting me! This is great! and don't forget, everyone... Have fun and stay Safe on St. Paddy's Day.

Happy St. Patrick's Day! :) Three wishes... hmmm, I would have to really give it some thought, but would definitely have some fun! ;) greenshamrock atcox dotnet

Three wishes would be hard to decide. I think I Would wish for something for my daughters. There are three so one for each.
debby236 at gmail dot com

Hey! Thanks for the comments. I've sent emails to Debby and bn100 offering a free copy of A Shamrock Shag as a prize! Also... Colleen C... If you send me a note at traceydesantoerotica@gmail.com I will connect you up as well. Hope you all had a wonderful St. Paddy's Day!