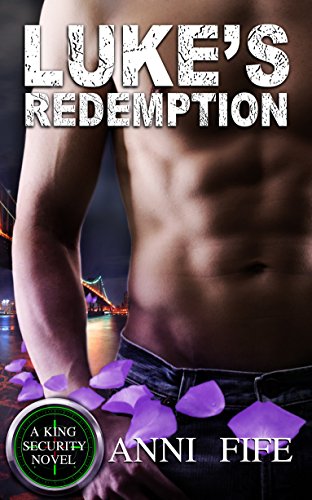 Katya Dalca has known for years that her mob-connected father is a cold, controlling bastard. When she overhears his promise to marry her to a Russian gangster, that is the last straw. She runs away to New Orleans, taking a flash drive full of incriminating data as insurance.

Ex-Marine Luke Hunter has an assignment: get the memory stick from Katya and deliver it to his boss at King Security. His family history with drug abuse only reinforces his determination to succeed in this job. Luke doesn’t plan to seduce Katya, just get close enough to snatch the drive, but she enchants him so completely he cannot resist taking the innocence she offers. When magic of their night together drains away in the chill light of dawn, Luke realizes the enormous mistake he’s made. Pocketing the memory stick, he turns his back on his new lover and disappears, leaving Katya confused, grieving, and, as she later discovers, pregnant.

Luke’s Redemption is Anni Fife’s debut novel. It displays the tell-tale passion of a first book. Although many of the tropes are familiar (loss of virginity to a soul-mate, secret baby, and so on), Katya’s intense emotions keep the book fresh and indeed, quite harrowing. Time and again she is betrayed and abandoned, but stubborn courage plus her devotion to her daughter keep her from giving up. Ms. Fife writes Katya’s sections of the book in the first person, making the heroine’s agony all the more immediate.

The sections from Luke’s point of view, in contrast, are written in third person. When I noticed this discrepancy (about halfway through the book), my first thought was that this was an editing problem, but the distinction is consistent throughout the novel. The third person narrative has the effect of distancing the reader from Luke’s feelings. I wonder if this is why the author made this artistic choice.

The book covers a period of more than six years. Since this is a romance, Luke finally does overcome Katya’s (justified) distrust to create the conditions for a HEA. My personal opinion? He doesn’t deserve her.

I read a lot of romance reviews that comment on the reader’s reactions to the characters as people. Most of my reviews, in contrast, tend to focus more on the literary characteristics of a book.

In the case of Luke’s Redemption, however, I found myself disliking Luke enough that it interfered with my overall appreciation of the story. As he tries to win Katya’s love, he repeatedly promises her honesty, respect and protection—then fails to deliver on these promises. He’s a conceited chauvinist who treats her like a weakling and refuses to allow her to make her own decisions. Meanwhile, he acts as though he’s blind to the threats she faces from the dark, criminal forces arrayed against her. In the final crisis, he watches helplessly while she single-handedly subdues the vilain.

Despite my feelings about the hero, I actually liked Luke’s Redemption quite a lot. Ms. Fife writes clear, vivid prose that moves the story along at a brisk pace. Katya’s emotions carry the book. It’s inspiring to watch her build a life after having it shattered by her encounter with Luke. Their mutual chemistry is so strong that you want her to reconcile with him and experience some happiness. He’s such an extreme alpha, though, that I found this outcome a bit hard to believe.