Usually I host guests on Saturdays, but today I don’t have anyone waiting in the wings. Hence, I’m free to indulge myself with a Saturday Spankings post!

The excerpt below is a bit of role-playing from my free wheeling erotica novel Incognito. My heroine, Miranda, is masquerading as her best friend Lucy, who has set up a kinky rendezvous with an older man who asks to be addressed as “Big Daddy”.

Not for the faint of heart! 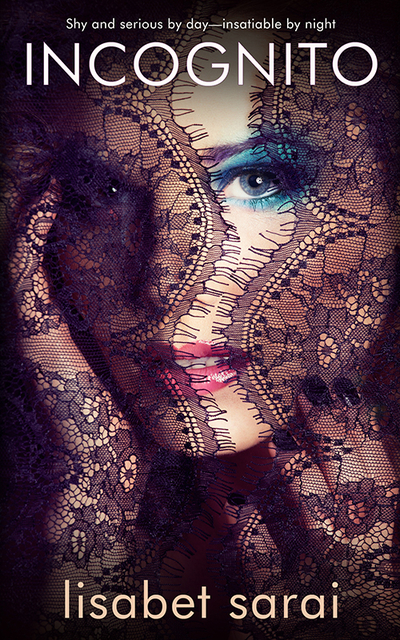 “Now, Lucy, you must be honest with me. You must tell me about these thoughts and feelings which disturb you so much.”

Miranda swallowed nervously. It was remarkable, but she felt guilty and embarrassed. “Well, it happens mostly at night. When I lie in bed, feeling the cotton sheets drift softly over my body. Even through my pajamas, I can feel them, as if someone was stroking me. I get all tingly and strange, and then I start imagining things, remembering things…”

Big Daddy leaned forward, a gleam in his intelligent brown eyes. “What sort of things, Lucy? Don’t be afraid—you can tell me.”

“That time in school, when my gym suit ripped. All the boys saw my panties, but later, I wished that I had not been wearing any underwear.” Miranda was amazed at herself. Where were these stories coming from? They felt real; it was almost as if she could really recall the incident.

Her companion gave a little tsk, but encouraged her to continue.

“Then there was that afternoon, when Madeline and I took a shower together. She wanted to touch my breasts, and I let her. She made me touch hers.”

“Made you? Can you honestly tell me that you didn’t want to?”

Miranda blushed, astonished at her reactions to her own crazy stories. “No, Big Daddy. I wanted to touch her, I admit. Afterward, I remembered and wished that I had touched her in other places.”

“Where? What other places?”

Miranda stared down at her patent-leather shoes. “You know, Big Daddy. I can’t say it.”

“No,” said Miranda. “There’s more. The thing that I remember most is the time when I watched you. It was years ago, but I still remember, and when I do, I get all hot and itchy.” Her companion was silent and attentive. “I stood behind the bathroom door. You didn’t know I was there, but I saw you. I saw your thing. You stood in front of the toilet, with your hands on your thing, jerking it back and forth. Then after a while, you yelled and were quiet. Then I saw you pee, a long yellow stream arcing into the toilet. When I remember that, that’s the worst. There’s this strange feeling between my legs, as if I needed to go to the bathroom myself. But when I try, I can’t. There is just this awful tight, burning feeling that won’t go away.”

Miranda could not believe her own imagination. She knew that this had never happened, that this was pure fabrication. Yet the mingled shame and excitement were as real as the caress of the brocaded upholstery against the backs of her bare legs.

“Do you touch yourself when you have these feelings?” he interrogated, leaning forward in his chair. Miranda was suddenly frightened.

“Well—sometimes I stuff a pillow between my legs. I can’t help it, I have to do something. But I never use my hands…”

Big Daddy sat back in the chair and stroked his beard. Miranda’s heart beat ridiculously fast. “Lucy, you have been exceptionally naughty. Spying on me when I am engaged in my private pursuits! You look so sweet and innocent, but you have the makings of a little slut.”

“Over my knee,” the distinguished gentleman barked. “Now.”

“You know that I am only doing this for your own good. I get no pleasure from chastising you.”

Like hell you don’t, thought Miranda, but she meekly obeyed his order. She was dying to have him touch her, any way that he wanted. He helped her position herself so that her pelvis lay across his lap. Her long legs dangled awkwardly on one side. He hooked the ottoman with his foot and rolled it over to the side of the chair, so that she could rest her forearms and head upon it.

As soon as she was stable, Big Daddy pulled her brief skirt up around her waist. The simple cotton underpants that she wore fully covered her behind. Still, she had never felt more exposed.

For the longest time, he did nothing but stare at her cotton-wrapped buttocks. She felt his gaze as if it was a laser, burning through the cloth and igniting the flesh underneath. He breathed deeply, a bit faster than normal. Miranda’s own breath came in gasps. Her chest hurt from the thudding of her heart.

Big Daddy began stroking her butt-cheeks in smooth, symmetrical circles. “Lucy, Lucy, what am I to do with you?” he murmured. “You are so enchanting, it is difficult to be stern. However, I must be strong, and discipline you as you deserve.” With sudden force, he grabbed her underwear at the waistband and pulled it down to her thighs.

“No!” wailed Miranda. “I’ll be good.” She could feel his hot breath, now, on her naked butt.

“You will, indeed, if I have anything to do with it,” he replied, and began to spank her with his open hand.

It hurt more than Lucy had expected, stinging with contact, aching after his palm left her flesh. As he tanned first one cheek, then the other, she began to feel as if her whole ass was being held to a raging fire. She twisted in his lap. Little bleating sounds came from her throat, involuntary, infantile.

Now her whole lower half was throbbing. Each smack set up echoes, ripples of pain that sped along the backs of her thighs, singed her nipples, made her sex contract and ache. He was alternately murmuring endearments and haranguing her with criticism, but she hardly heard him. All her consciousness was focused on the white-hot pain-pleasure seething in her body.

Through her mental haze, she gradually became aware of something hard, poking up from his lap and pressing deliciously against her clit. She smiled to herself. Obviously, Big Daddy was not unaffected by the administration of discipline. She wriggled around, trying to rub herself against his emerging erection. For a moment, Big Daddy seemed not to notice.

Then he suddenly ceased his blows. Miranda felt a sense of loss. “You minx!” he said softly. “Even as I work to beat the lasciviousness out of your young flesh, you take advantage of my weakness!” His erection surged against her crotch, even as he made this speech. Knowing that she was sealing her fate, Miranda could not help writhing, stimulating him further.

“Enough!” her companion roared, tumbling her off his lap and onto the carpeted floor. “You will not tempt me, Lucy! Nothing will compel me to satisfy your unnatural lust. Much as you might desire it, I refuse the flower of your maidenhood.”

Miranda lay in a crumpled heap at his feet, her underwear tangled around her ankles, desperately willing him to take her.

“No, I will not sink to your level, Lucy. But I will punish you in a way that you may understand better than my honest beating. I will subject you to a shame that even you can comprehend. ”

Fear returned briefly, arcing through her body like lightning, but irrationally, trust of this stranger overcame her terror.

“On your belly, over the ottoman, Lucy. Do not cross me further, or I will have to take truly drastic measures.”

Miranda wondered, curiosity overwhelming fear, what those measures might be, as she extricated herself from her panties and followed his instructions. Her pleated skirt covered her bare buttocks, but only for a moment. Big Daddy flicked it aside, almost in contempt, then stared again at her naked ass. His gaze re-ignited the glow of his spanking. She found herself longing to feel again the delicious heat of his palm on her flesh. Instead, he grasped her cheeks and pulled them apart, so that he could inspect her anus.

Posted by Lisabet Sarai at 7:20 AM