Sneak Peek:: A Kiss in the Shadows (#romance #suspense)

[Greetings! Today I'm hosting a sizzling, scary romantic suspense tale by Lily Danes and Eve Kincaid. They're giving away a $20 bookstore gift voucher, too. Just use the Rafflecopter at the end of the post to enter! ~ Lisabet] 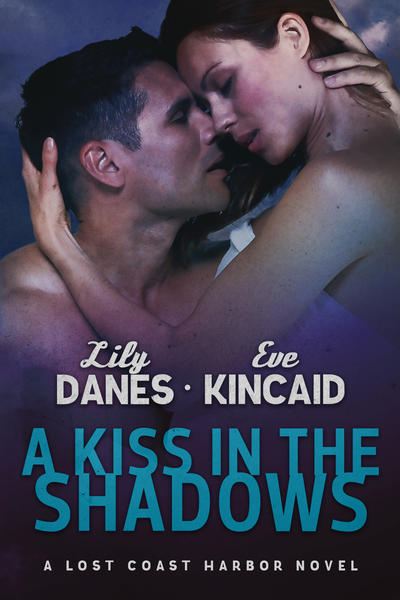 Erin Grady is used to taking care of people. That’s why she’s thrilled to finally realize her dream of opening a clinic…and why she’s willing to overlook where the money came from—until a determined prosecutor comes sniffing around.

Will Patton is desperate to leave the small fogbound town of Lost Coast Harbor and build a real career for himself. But to do that, he’ll need to expose the dirty police chief—and betray the woman who makes him wonder if he’s leaving town too soon.

But the corruption in Lost Coast Harbor runs deep and wide—and exposing the truth will require Erin and Will to expose their hearts…no matter the risk.

Erin studied Will in the pale illumination from the street lamp. The overhead light brought out his cheekbones and cast his eyes into shadows. The fine mist settled on his thick dark hair.

God, he was really good looking. Objectively, she’d recognized this fact from the moment he’d fallen in front of her, and again when he was lounging in the hospital, trying to charm the nurses. But now, standing in the dark and cold night, alone… she couldn’t take her eyes off him.

His lips turned up slightly and her stomach fluttered. She’d been staring too long, too intently. The heat burned up her neck to her cheeks.

“How about the dinner I promised?” he asked.

Erin shook her head. “You don’t have to do that.”

As soon as the words slipped out, she wanted to take them back. His gaze intensified and the flutters in her stomach grew to tremors. She didn’t even like cops, and though he wasn’t in uniform, that’s basically what he was. He was the end result of law enforcement.

She shivered and tried to tell herself it was the chill from the fog, but knew it wasn’t. It had been way too long since a man had looked at her like that.

Oh, what the hell.

“I have to get Colin home,” she said.

“Tomorrow then,” he said. He still held her hand, his thumb casually stroking the inside of her wrist. The touch was intimate, familiar. Long-dormant parts of her body woke in a wave of longing and heat.

“I can’t tomorrow. I, uh, have to—I have plans,” she said, with genuine regret.

Will raised an eyebrow and Erin realized she was brushing off the only man who’d taken her breath away with a touch in, well, forever.

“It seems that an awful lot of your vocabulary revolves around what you have to do,” he said, his head tilted slightly as he watched her. “How about this? I’m going down to the Crab Shack for dinner in about an hour, because it’s the only place open on a Monday night in this town. I’ll get a table for two. If you want to join me, I’d love the company.”

What she wanted was a nearly foreign concept, something Will seemed to have picked up on. She could defend herself, argue that she did what she wanted. That would be a lie, though. And she did want to meet him later.

It was a good opportunity to take Jerry's advice and talk to a prosecutor about the donation to the clinic, her rational mind said. It was just dinner.

But with a man whose slightest touch sent her reeling, her body reminded her. So don’t be late.

Get your own copy of A Kiss in the Shadows!

Like so many good ideas, Lost Coast Harbor was inspired by a few rounds of margaritas. One sunny afternoon, Lily Danes and Eve Kincaid went to a Mexican restaurant for snacks and tequila and left with the idea for a new series. Inspired by their love of noir movies and 1940s crime novels, they imagined a gritty small town full of crime and corruption, where intrigue and mystery can lead to love and passion.


Eve Kincaid is a lapsed lawyer who decided that fictional crime was more fun than the real deal. When she’s not writing about mysterious women and the dangerous and sexy men who love them, she’s probably shopping for books, lipstick, or imported cheeses to complement a nice California pinot noir.

You can keep up with Eve’s new releases by signing up for her reader newsletter. She’d love to hear from you. Just don’t be creepy about it.

Giveaway! Lily and Eve are giving away a $20 Amazon or B/N GC to a randomly drawn winner via rafflecopter during their tour.


Increase your chances of winning...visit all the stops in the book blast event!

Thanks for dropping by my blog. Reading your different excerpts, I really got a sense of who Erin is.

This book really sounds intriguing! I will definitely check it out. :)

Thank you so much for hosting us!

This book sounds like the start of a great series.

Got it! And Book 1....looking forward to reading them..mystery and romance...perfect combination.. :)

Sounds amazing. I'm gonna start this series this weekend. Thanks for sharing this with us.

Sounds amazing. I'm gonna start this series this weekend. Thanks for sharing this with us.

Sounds like a good read with that intimate small town feel where there's something sinister beneath that nice facade.