[My Sneak Peek today spotlights a real-life travel adventure by Susan Joyce. Don't miss the giveaway at the end! ~ Lisabet] 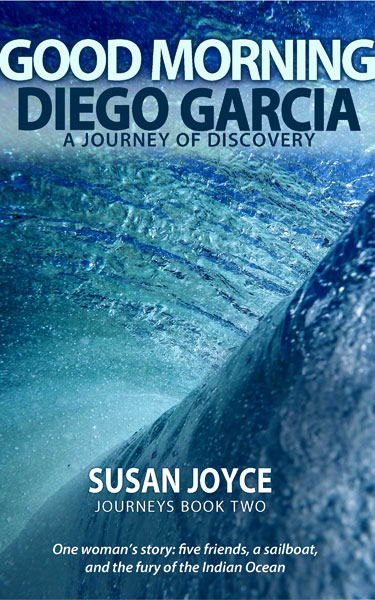 When Susan and Charles receive a letter from Cyprus friends, now in Taiwan, they get a chance to help crew a sailboat from Sri Lanka across the Indian Ocean. They have no clue what to expect. Susan reminds Charles she isn't a good swimmer. He tells her a life jacket will do the trick, and convinces her it's the opportunity of a lifetime. A must-do travel adventure. They say goodbye to friends and family in sunny California, fly to New York and on to India, arriving the day the Indian government has issued a state of emergency. And then onto the boat, and into the ocean. In monsoon season. With no charts.

In this true-life travel adventure, Susan keeps a journal and record her bizarre thoughts and telling dreams. A real life thriller, Susan's monsoon-season journey is about discovery and spiritual realization—one dream at a time.

Downward, we dove through a dark blanket of clouds. All belted in for a smooth landing.

As we neared the ground, the clouds cleared. We crossed a crowded expressway with bumper to bumper afternoon traffic. I could see passengers sitting in cars waiting to move forward. Touchdown was seconds away.

Without warning, the craft groaned and shuddered. Flaps shifted. Engines roared. In an instant the aircraft pitched sharply and climbed skyward with great speed.

Items tumbled from overhead bins as the plane shook violently in midair.

The plane made a sharp turn to the left and the ground fell away.

Below us, I saw a huge orange ball of fire erupting on the runway.

The fire sent black smoke billowing into the air above a twisted, burning plane.

“No survivors there,” Charles said, craning his neck to see what was happening on the ground.

A few minutes later, the sound system crackled and the captain announced, “As you’re aware folks, we've had to abandon our final approach to land on runway 221. We're lucky to have missed a major disaster. Eastern Air Lines Flight 66, a Boeing 727, was struck by lightning on its final approach to JFK,” his voice cracked, “and has crashed on the runway. Eastern was the plane landing in front of us. If we had arrived a split second before the Eastern plane, ours would have been the plane struck. We're lucky to have been second on the approach path.” 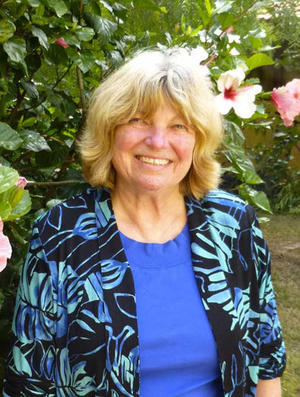 Born in Los Angeles California, Susan Joyce spent most of her childhood in Tucson, Arizona and returned to LA as a young working woman. Inspired as a child by postcards from her globe-trotting great aunt, Susan left the United States at age 20 to see the world.

She planned on being gone for a year, but ended up living her 20s and 30s in Europe and the Middle East. As a Jill of all trades, she worked as a secretary, freelance writer, taught computer classes, wrote songs, and became an accomplished artist while writing her first children's book, "Peel, the Extraordinary Elephant."

An award winning author and editor of children's books, Susan's first adult book in her memoir series, "The Lullaby Illusion--A Journey of Awakening" is a travelogue of the politics of Europe, the United States, and Israel during a twelve year 'roller-coaster' period of her life and an adventure of survival through friends and sheer determination.

Her second memoir, "Good Morning Diego Garcia" is about her adventure from India and across the Indian Ocean in monsoon season in 1975.

Stop in and say hello to Susan here: https://www.facebook.com/AuthorSusanJoyce/?fref=ts

Susan will be awarding a $20 Amazon or B/N GC to a randomly drawn winner. Use the Rafflecopter below to enter!

Welcome to Beyond Romance, Susan!

This sounds like an amazing story. I really had a hard time choosing among your excerpts--they were all riveting.

Good luck with the book blast!

Thank you! Happy to be with you today. Good Morning Lisabet and readers! Thanks for hosting and promoting my new book! I’ll check back later in case anyone has a question for me. Any questions--weird or wonderful.

Lisabet Sarai, thank you! You can read more on my blog site. http://susanjoycejourneys.com/ Fun to be with you today.

This particular adventure would be my personal worst nightmare and for that perverse reason it would be a exhilarating read, taking me out of my comfort zones.