A Trio of Demons (not to mention a contest!)

[I've got a smoking hot sneak peek for you today. Tina Donahue's paranormal menage Mastering the Beast. Plus she's got a fantastic giveaway at the end of the post! ~ Lisabet] 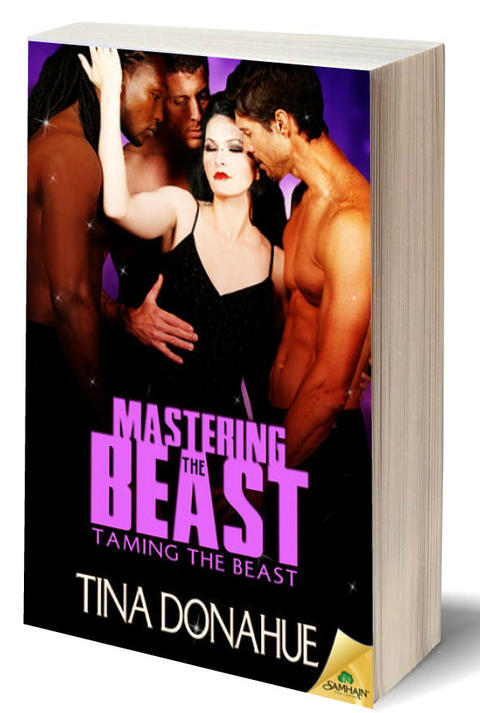 Surrender is the only option she desires.
Taming the Beast, Book 3

No one believes that under the tough attitude and schoolgirl fashion sense, reformed demon Zoe burns for a man, love, and sex. She keeps those urges on ice and well hidden. She sold her soul for a guy once, and all it got her was a one-way ticket to Hell.

Her job, keeping supernatural creatures in line at From Crud to Stud, is all work and no play. Until she’s saddled with a trio of new enforcers who ooze so much sexual heat she’s afraid to be on the same planet with them.

Stefin, Anatol, and Taro try to contain their laughter as their adorable new boss tries to lay down the law. Apparently, no one told her they don’t take orders. They give them. And they’re determined to smooth her rough edges and tame her beast with acts so wanton they’ll make her scream—for more.

Talk about all hell breaking loose. Surrender won’t come easily, but given their devilish charm and her aching need, her journey to submission is one done deal.

Warning: Contains an unholy trio of demons who don’t like to take turns. Break room…snacking. After-hours…training sessions. In other words, a sensual ride on the pleasure express. Features m/f/m/m sex in every flavor except vanilla. Bring. It. On.

He tightened his arms against his chest, which rippled his massive biceps.

Zoe’s lips parted at that rugged display of male prowess and his sexy-as-hell tat.

“From this moment forward, you’re working for us,” Stefin said. “Doing whatever we demand, including taking care of our carnal needs. Trust me, there are many. We call the shots, not you. We’re in command, not—”

He didn’t finish. Couldn’t actually. Flinging her hand, Zoe released a good deal of her pent-up power that she’d promised never to use again. She’d tried to be nice and where had it gotten her? Stefin saying she was going to be his office and sex slave.

With a thunderous crack and a flash of blazing light, she was suddenly outside the room while the three men were locked inside. Hopefully for good.

Constance turned into the hall and stopped mid-step, her full-length gown swishing around her legs. Its dusty-rose color matched her turban, complementing her ebony complexion. She stared at Zoe and walked slowly around her.

Looking over, Zoe turned in time with Constance until they were both moving in tight circles.

She looked down, surprised her blouse was unbuttoned to her waist. When had that happened? One of its tails hung out of her skirt, which was unfastened and had fallen to the tops of her thighs.

Swearing beneath her breath, Zoe buttoned, zipped and smoothed her clothes until she was back to her old self, pissed and smokin’ away. Damn.

Constance regarded the treatment room. The old door was gone, replaced by a thick steel one, the kind used for a bank vault or a morgue, to keep stuff inside. Constance leaned toward Zoe. “Who, or what, is in there?”

She regarded Zoe’s outfit and then her mouth.
Zoe stepped back. Her lips felt as if they were twice their usual size from Stefin’s hard and ruthless kiss. Passion that went so deep she could still taste him on her tongue. Her pussy couldn’t have gotten any wetter, her soft folds plumper.

Tapping her finger against her cheek, Constance smiled conspiratorially. “Someone’s been bad.”

“I don’t want to talk about it.” She pivoted and strode down the hall.

Catching up, Constance grabbed Zoe’s arm and dragged her back. “Ah hon, you can’t leave them in there forever. By the way, how many are we talking about? What are they exactly? Vamps? Weres? Satyrs? Zom—”

“If you say so.” She lifted her hands. “I’ll just remove those nasty memories from you, and you’ll be as good as new.”

Zoe backed up so quickly, her ass hit the wall. She looked over at it and then back at Constance. “Don’t touch my head or one freaking memory.”

Constance gave her a knowing smile. “Wouldn’t think of it.” She dropped her hands. “Those pricks must be something if you want to remember them that badly.”

Zoe spoke through her teeth. “Even you couldn’t erase the stuff they just did.” Those memories were burned in her mind for all of eternity.

Freaking amazing and hopeless since their lust for her wouldn’t last long. It never did with guys like that. This was about taming her, having their way. Lots of luck with that since she wasn’t playing.

“Come on,” Constance coaxed, “tell me. Maybe I can help.”

Yeah, sure—wait. Maybe she could remove their memories and they wouldn’t recall ever having been here. They could go somewhere else and bother other female demons.

Zoe smiled and then frowned at the thought of them with someone else. Finally, she sighed, knowing that was the only way to get them out of her life before they did real damage. “Okay, here’s what happened. First, he’s all over me, then they strip, then he tells me I’m here to do his bidding in bed and out like everyone died and made him the freaking ruler of Heaven, Hell and Earth. Can you imagine?”

“He thought I was smoking to turn him on.”

“Well, hey, as long as he’s cute, it doesn’t matter if he’s not the brightest bulb in the pack.”

I’m offering one winner her (or his) choice of FIVE of my backlist ebooks – full-length, bestselling, award-winning, from this list (25 choices). Just use the Rafflecopter below to enter.

Welcome to Beyond Romance, Tina.

Thanks, Lisabet - appreciate you hosting me! :)

Thank you for the great excerpt. I can't wait to read more on what happened and hoe Zoe gets the cruds under control.

This is not my kind of reading. But at least the tweet made me curious enough to check. ;-) Goodbye.