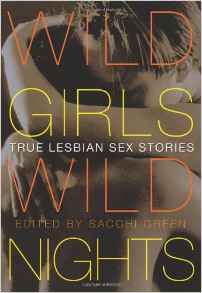 How does one evaluate a collection subtitled “True Lesbian Sex Stories”?

Originality counts as one of my top criteria when reviewing fiction. A startling premise, a setting or a conflict I haven't encountered in the past, will immediately predispose me toward enjoying a story. Can this be applied to real life tales, though? To a large extent, we don't choose our experiences, although authors will clearly exercise discretion in selecting the events to recount. Still, given the fantasy-oriented nature of much erotica, the more creative and unusual premises often tend to be the most implausible.

How about the arousal generated by the stories? This is a highly personal criterion, depending as it does on one's own sexual proclivities. A couple of tales in this collection definitely pushed my buttons, especially “The Insatiable Travel Itch”, by Evan Mora, which brilliantly exposes the narrator's frustrated fantasies, and “Delinquents”, by Catherine Paulssen, a gorgeously sensual first-time tale. Given my usual tastes, one might have expected me to mention some of the kinkier offerings, such as Mia Savage's “Kat's House”, Danielle Mignon's “Are You My Mommy?” or Cheyenne Blue's “Nurse Joan”. However, I have no experience with and relatively few fantasies about F/F dominance and submission, so these titles had less of a visceral effect on me than I would have guessed.

Writing quality, then? No problem here. With one or two exceptions, the offerings in Wild Girls, Wild Nights are as well-crafted as I'd expect from an award-winning editor like Sacchi Green. Vivid descriptions, believable characters, variety in subject and voice: if this were a fiction anthology, I'd have no reservations about giving this book a definite thumbs up.

But therein lies the rub. For the most part, these tales read not like true confessions, but like fiction. They have initial hooks, plot arcs, conflict and resolution. Real world experience is messy, confusing, and usually inconclusive. Ambiguity reigns. There's no ending, happily-ever-after or other. These tales, however, are mostly polished, self-aware, self-contained nuggets with a point and a punch-line.

Then there's the fact that perceptual experience is notoriously difficult to recall accurately. It's generally not possible to give an accurate account of past events without “filling in the blanks”, whether consciously or not. When the experience in question occurred decades ago (as is obviously the case for some of these authors), the imagination-to-fact ratio increases dramatically.

When I recall my first Sapphic experience now (after more than thirty years), I remember only a few salient details. If I were to recount this for a book, I'd have to recreate – or invent – almost all the context. And then there would be the temptation to change the outcome – the fact that this woman, a dear friend, and I have never talked about that one night again. That doesn't make a good ending, after all.

So I don't fault the authors in this book for producing stories that feel like – stories. However, that makes me admire the few authors whose accounts really did feel more like “being there”.

“Higher Learning” by Charlotte Dare fell into that category. I liked this account because of the unconventional relationship between an older woman returning to college and a much younger student who is nevertheless old enough to know what she wants – and what she's doing. The uncertainties of the older narrator come through clearly and ring true. Every woman, after a certain age, wonders how she could possibly be viewed as desirable. Most of all, I appreciated the fact that the story ends with a question mark. The two women pursue separate career paths in different states. Neither wants to end the relationship, but will it survive the stress of geographic separation? Ms. Dare leaves us to wonder.

Another stand-out for me was Catherine Henreid's “Odds”. This story, set in Tel Aviv, has enough disasters in it that I can't help believe it. The quirky and unpredictable encounter between the narrator and her bisexual housemate, who is in some sense a total mystery, was both intriguing and arousing.

I've already mentioned “Delinquents”, about two girlfriends who experiment with lesbian sex while their parents are away. I strongly identified with the narrator's concerns about how this would alter the relationship – naturally, given my personal experience.

Finally, I have no doubts about the truth of Dawn McKay's “Hot Summer Nights”, in which the author, a military medic in what is likely Iraq, shares a single night of healing passion with an off-limits officer. The sense of risk, of desperation, of sorrow, that permeates this story make it one of the most intense in the volume.

She left as quietly as she had come, slipping from my tent in the middle of a sandstorm.

I'm an author, and I think about these things too. Wild Girls, Wild Nights is a bit of an epistemological puzzle, all the way around. However, if your main interest is simply in reading some hot, believable, girl-on-girl tales, you won't be disappointed.