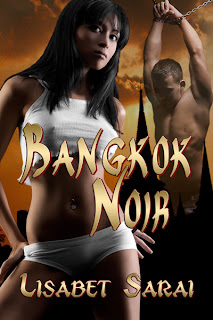 Let me warn you that Bangkok Noir is not a romance. It does not have a happily ever after ending. On the other hand, it features unconventional characters, mutual affection and respect, and steamy sex with an emphasis on dominance and submission.

Diana Fanning, aka the Professor, runs The Academy, the only genuine BDSM bar in Bangkok. She’s the first person police colonel Apichat Weeranwongsakul consults when a bar girl turns up brutally murdered, tightly bound, with clamped nipples and every orifice stuffed with sex toys. The colonel figures the killer might be one of her customers. But he has his own secrets. He needs Diana to satisfy his shameful dreams of being beaten and abused. Meanwhile, a mysterious American named Sam stalks Nok, the lovely natural dominant who is the Professor’s star performer. Nok is used to being the one in charge. She can’t understand why she craves the discipline Sam administers.

As more women are slaughtered, always in kinky circumstances, the Professor finds herself in an exclusive world catering to the perversions of Bangkok’s wealthy and well-connected. Simultaneously looking for evidence and satisfying her own lusts, she doesn’t realize until too late that the power she’s used to wielding won’t save her from becoming the serial murderer’s next victim.

Sound intriguing? Click here to read an excerpt. Then leave me a comment with your reactions. Do you ever read books that have darker endings? Does my excerpt make you curious?

On Sunday I'll randomly draw the name of one commenter and send him or her a copy of the PDF. (Please include your email address in your comment so I can find you!)

Posted by Lisabet Sarai at 4:41 AM

Female Dominants and male submissives? Count me in!

Do so love how you write. More more more....

Wow, just read the excerpt!
Count me in the draw please.
Suze

Whew! Awesome cover and excerpt. This is a must have novella for me, lol.

Congrats on the new release!Wishing you many sales!

Yeah, the cover is definitely perfect for the story!

Thanks for dropping by, Suzy!

Thank you for taking the time to come by! Actually the book includes both female and male dominant scenes - and one switch!

Thank you for dropping by, Serenity!

You're a new visitor, I think - I hope you'll stick around!

Very nice excerpt, Lisabet, and I can't wait for more!

I loved your excerpt and can't wait to see how the story ends. Not everything is happy in life. It's good to have more options than happily ever after.
Thank you for putting my name in the hat.
orelukjp0 at gmail dot com

Love the cover -very sexy. I liked the excerpt, too. I don't always want to read the happy ending. Edgy and super kinky is just fine!

The cover is really delicious! The story sounds interesting too!

I prefer happy endings but am not averse to giving something new a try. Your book sounds intriguing enough to have me interested in trying it :D
The cover is a plus too :D

So pleased to see you here - and of course I'm really flattered you liked Ruby's Rules enough to read it a second time. With all the books out there, that's a huge compliment.

I worry that my romance readers will be put off by darkness in this book. Hopefully that's not true of everyone.

Right now this cover is probably my favorite ever. Although the cover of M/M coming out next month is a very close second...!

Thanks, Candy! Glad you dropped by.

This book is definitely not "typical". I do hope you get a chance to read it.

I hope you'll give the book a try! Thanks for taking the time to say hello.

Great cover and I loved the excerpt. The sensuality pours from the pages. Would love to review it for my blog.

:] It's because I can relate well with your characters--your writing is an amazing fit for my brain and personality. *wink*

I loved the excerpt and the cover is wonderful. It is artfully done without be overly showing.

The excerpt was entrancing. The imagery and emotions flowed as if the characters were real. I intend to try to get this book. It has two of my favorite things, suspense and erotica in one book.

Thanks to all for dropping buy! I've drawn a winner - it's Little Suze!

I hope the rest of you just might consider buying the book on your own... it's cheap!