[I've got a sneak peek for you today from Suz DeMello's new vampire book, Temptation in Tartan. I had the pleasure of meeting Suz last year at the Romance Times convention. Believe me, she's one of a kind! Enjoy! ~ Lisabet] 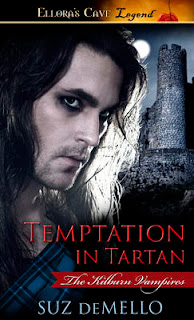 Blurb:
She had to marry a monster…
Rumors had followed the chieftains of Clan Kilborn for centuries. Said to be descended from the Viking Berserkers, they were ferocious in battle, known for tearing off the heads of their enemies and drinking their blood.

But English noblewoman Lydia Swann Williston would marry Kieran, Laird Kilborn, to bring peace to the Kilborn lands after the horror of Culloden and the brutal pacification. A widow, she also brought needed wealth to Clan Kilborn. For her part, eighteen-year-old Lydia wanted children. With her husband killed at Culloden, she would make a new life in the Highlands.

The old chieftain of Clan Kilborn also died in battle, and she hoped that the new young Laird would lack his ancestors' ferocity.

She was wrong.
Excerpt, Chapter One

“The Kilborns are great warriors, rumored to be descended from Viking berserkers.” Colonel Swann paced the drawing room, his boots soundless on the thick rugs.

Lydia’s belly clenched and she drew a frightened breath. “Berserkers!The savages who raided our shores, murdering monks and, er…attacking women?”

The colonel stared at her as though a potted plant had decided to speak. Not surprising, since Lydia had always been known in their family as the quiet one.

“The same,” he said. “And the Kilborn clansmen have intermarried for generations. Animals.” He tugged at his tight cravat. Out of uniform, dressed as a town gentleman, Lydia thought her cousin lost some of his edge. Scowling, he continued, “By this marriage we seek to dilute the Kilborn blood and weaken the line.”

“Weaken the line, sir?” Lydia’s mother, Henrietta, raised a brow. “Do you suggest that my daughter’s lineage is flawed? Ours is one of the noblest families in the kingdom.”

“True,” he said. “By adding Lady Lydia’s noble blood to the Kilborn line, we will civilize the wild Highlanders.”

Lydia tried to look civilized and noble, but couldn’t stop twisting the handkerchief in her lap. She rubbed its black edging, a reminder of her status as a widow. “You want me to marry an animal. A barely civilized wild man.”

“The Crown would take your selflessness as a particular favor,” her cousin said.

She lifted her brows. “Indeed.” As a general’s daughter, duty pulled at her blood.

“‘Tis a perfect solution. ‘Tis easier to pacify by marriage than by the sword. All parties will benefit.” His glance strayed to the bodice of Lydia’s gown. In half-mourning, she wore gray muslin trimmed with black piping. “You must desire children. The Highlander is doubtless, uh, lusty.”

She pursed her lips. She’d loved William, but hadn’t grasped why others made such a fuss about marital relations. But she did want children and had planned to have several. “You want me to marry a warrior who may have killed my husband at Culloden Moor,” she said. “I can’t do that.”

Colonel Swann remained silent but looked uneasy as Lydia’s mother crossed the room. “Your late husband,” Henrietta said and sat on an ottoman next to Lydia.

When her mother took Lydia’s hand, she couldn’t control the trembling. At eighteen, she knew she simply wasn’t brave.

Unlike her mother, who now peered into Lydia’s eyes. “Child, what else will you do? Of course, as a widow, you can refuse. But another marriage may make you happy.”

“Do I have to marry a wild Scotsman? Leave my country and everything I know?”

“Of course not. But you are already acquainted with all the other eligible males of our class, and chose William over all.”

“That’s so.” Lydia remembered her days of attending parties and balls in London a scant three years ago. She sighed.

“You’ll bring great wealth,” the colonel said. “And by your marriage, Kilborn will be spared the pacification efforts that other clans and chieftains suffer. You’ll be valued and honored.”

“I have my portion and William’s, but I am not particularly wealthy,” Lydia said.

“Not by London standards, but for an impoverished Highland chieftain, you are a rich prize.”

“Lovely.” Lydia stood and walked to the window, her voluminous skirts rustling.

Below in the garden, she could see her brother playing with one of his sons. She watched George pick up Andrew, toss the giggling child into the air and catch him before they collapsed in a laughing heap together on the sunlit lawn.

Her heart tripped. She might never see George and Andrew again. But she might become that happy parent, could have babies of her own to enjoy.

She turned to face her mother. “I’ll do it.”

Kieran, Laird Kilborn, strode along the upper wall-walk of his castle, his mood as dark as the midnight sky above. Below him, the sea crashed with the threat of a storm. His retainers scattered at the sight of their new laird’s frown, for Kieran was known to show his temper. His own father had borne a scar on his forehead from a tankard a young Kieran had thrown when the princeling had been but four.

Kieran pinched the bridge of his nose, staring out over Clan Kilborn’s crofts and lands, lit only by moonlight. His lands, now, following the deaths of his father and older brother at Culloden. An unexpected burden—his lands and his responsibility.

Kieran turned, remembering to soften his frown. No one else would dare to disturb his thoughts, but Euan was different. The castle’s steward, he’d been old when Kier was born.

“Aye, the reprisals are cruel.” Kieran rubbed his hand over the sturdy stone battlement.

“They will only get worse. The Sassenachs are determined to break all of the Highlands and to destroy the clans who supported the bonny prince. ‘Tis a stroke of luck that the Swan wants you to wed the lassie.”

“Why, though? What’s the benefit to the Sassenach colonel?”

The smaller man shrugged. “We are a remote holding. ‘Tis easier to pacify us by marriage than by war, and far less costly.”

“I’ll never give up tartan or sword.” A thin, chilly breeze lifted Kieran’s dark hair off his shoulders. He drew his plaid, vividly patterned in red, yellow and two shades of blue, more tightly around him.

“Wed the Swan’s cousin and ye will nae have to.”

“I had not thought to wed yet, with everything so…unsettled.”

“Er, I was thinking of Moira.”

“Oh, that one.” Kieran dismissed Moira with a wave of his hand. “She must know that Culloden changed everything, including her expectations.”

“Ye must secure the succession.” Euan’s dark, haunted eyes searched Kieran’s face. “I promised your father that I would see to it.”

“And would he have wanted me to marry outside our blood?” Kieran asked. His grand-uncle Euan knew more of the secrets of his family than did Kieran himself.

“Possibly not.” Euan looked troubled. “But marriage to the Sassenach lady will provide money, safety and heirs.”

“And what shall I do when the dark thirst takes me? Succor myself at my lady’s throat?”

“There are other ways.” Euan’s eyes were hooded and unreadable in the moonlight. “Other women—”

“There is no honor when the dark curse seizes us.”

“Then ye’ll marry the Sassenach wench?”

“‘Tisn’t so simple.The laird’s consort isnae merely a juicy quim or a fertile ewe. She must be more.”

Euan shrugged. “She’s a widow, managed her own household.”

“Hmm.” Kieran took a deep breath of the midnight air, scented with the tang of the nearby sea and the crofters’ hay. “Aye then, I’ll do it.” BIO: Best-selling, award-winning author Sue Swift, a.k.a Suz deMello, has written over fifteen novels, plus several short stories and non-fiction articles. She writes in numerous genres including romance, mystery, paranormal, historical, contemporary comedy and erotica. She’s a freelance editor who’s worked for Total-E-Bound, Ai Press, Liquid Silver Books and Etopia Press. She also takes on private clients.
Her books have been favorably reviewed in PW, Kirkus and Booklist, attained the finals of the RITA and reached the top ten on a bestseller list.
A former trial attorney, she resides in northern California. Her passion is world travel, and she’s left the US over a dozen times, including stints working overseas for many months. Right now, she's working on her next manuscript and planning her next trip.
Her blog is at http://www.fearlessfastpacedfiction.com. Find her reading picks @ReadThis4fun on Twitter, and befriend her on Facebook (http://www.facebook.com/SueSwift).

Lisabet, thanks for hosting me!

Hey Suz - I have this on my Kindle waiting for me to get a chance to read it!