If you love a “bad boy” hero, raise your hand.

There are limitless choices in today’s world. Paper or plastic? Ultra Soft or Ultra Strong?  Cold water wash or With bleach?  Print or electronic?  Kindle or a Nook?  Why did everything have to become so complicated?

A procrastinator has enough struggles when shopping…and while books are much more appealing, whether writing or reading fiction, there are many decisions to make.

First of course, is the genre, historical, contemporary, futuristic, romantic suspense, and on and on.  And then…characters. Plot is important but it all comes back to the hero and heroine to carry the novel.

Alpha male or beta male hero? Personally, I like a combination. In my latest book, Bad Boy, Back in Town, from Total-E-Bound, Rob Harrison gained a bad reputation in high school by screwing every girl he dated. But he wouldn’t fuck Kitt Maxwell (even though she wanted him to) because “she was a good girl” and he liked the way she looked at him like he was some sort of god; he didn’t want to lose her admiration.  Rob lived in the worst part of town and had nothing growing up except the good looks God gave him, and he used them to his advantage.

Kitt adored Rob, and why? Perhaps it was his cocky attitude, his dimpled grin, and the way he carried his cigarette pack rolled in his tee shirt sleeve right above his bulging bicep. They became friends without her parents knowing she was meeting him in a deserted barn. He sometime satisfied her sexually so she wouldn’t give in to some other guy, but they never really made out. After high school, Kitt thought she’d never see him again but always hoped she would.

Kitt, an amateur PI, is visiting her aunt while working an area case, and delighted to learn Rob is back in the Florida town he left twelve years ago. What surprises her is that he’s living high…but where is he getting his money? Kitt hopes he’s not the gigolo she’s looking to arrest, especially since he’s ready to give her what she always wanted.

I wonder if there isn’t a little of that in most women?  An attraction to the “bad boy” in town.  Decisions, decisions.  Do you want a handsome smooth-talking lover or one that swaggers and curses like a lumberjack? A gentle adept lover or one who likes it rough and exciting?

How do you want your hero to look? This takes us to another decision. Do you like specifics on physical appearance or do you prefer to be vague so the reader can picture him in her own mind? How does he dress? Of course, the cover illustration will play into this in some ways.  In erotica, the guy could be all muscles and nearly naked and solve the problem. 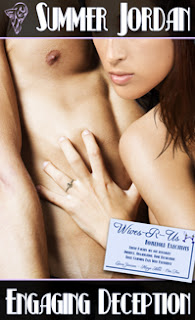 Whether you’re writing a book or choosing one to read, heroines present the same decision-making. I have a three book series, Lusty Ladies, where the women are openly seeking hot men. In my three Wives-R-Us books (Let Me Entertain You, Engaging Deception, and Breaking the Rules), Lea, Margo, and Erin are more refined, with careers and deeper goals, but their desires are just as strong.

One huge decision if you read or write erotica concerns sexual orientation. So far, I have only written male/female romance. Male/male or threesomes, etcetera, are big sellers and vampires and shape shifters are too.  I like to write a full-fledged story with a little mystery and humor, and of course, a lot of sex and romance and deep emotions.

Decisions, decisions. As a reader, what genres do you prefer? Do you like to know exactly how the characters look?  What kind of hero do you prefer? Preferences in heroines?  Do you want adventure and mystery woven in with wild sex and romance?

How do you want to read?  Paperback, hardcover, or downloads on an e-reader? Have you fallen in love yet with the ease of downloading to a device you can carry in your purse or briefcase?

Writing and reading novels are all about choices, but the selections available are much more tantalizing than picking from the multitude of products on the supermarket shelves. And most of us know what turns us on.

I knew a bad boy once…head over heels for him, but he didn’t have the redeeming qualities Rob Harrison. Now, I just read and write about these sexy specimens.

Rob Harrison was the thorn in Kitt’s side, the nightmare that woke her, and the love song that made her cry.

Irresistible Rob Harrison, the sexy bad boy from the wrong side of the tracks that Kitt Maxwell worshiped in high school, is back in town.

Now an apparent success, Rob is hot for Kitt, her long-ago dream come true…but is he the gigolo this budding detective is looking to arrest?

Kitt Maxwell opened the door to an insistent pounding and a man fell into her arms. Looking down at a shaved head lodged between her breasts, her heart pounded wildly. An escaped convict? A murderer? Or maybe a rapist. She’d come to Summerville in search of a criminal but hadn’t expected one to come looking for her.

The guy hung onto the doorframe supporting part of his weight but made no effort to move his nose from the middle of her cleavage. In fact, if she wasn’t mistaken, the bum was burrowing a little deeper. He could easily turn his head and by raising it just the slightest bit latch onto one of her nipples. Her pulse quickened and perspiration beaded its way between her breasts. Could he feel it through the thin cloth of her blouse?
Would he think she was hot for him if he did?

“Thanks for the soft landing,” he said, chuckling. 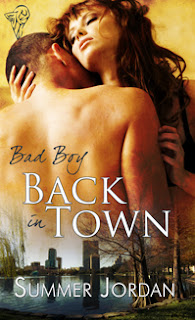 That clinched it. He was incarcerated for a sex crime. Most likely rape. And she might be next. “You pervert,” she sputtered. Pulse racing, she shoved the heels of her hands into his chest and he slid to the ground.

“Whoops,” he said, grinning up at her. “I think I might have had one teensy whisky too many.”

He flashed twin dimples and she caught a glint of gold from a front tooth.

“Oh my God.” Heat flooded Kitt’s body and she clasped a hand to the spot where his face had recently rested. “Rob? Rob Harrison?”

His chuckle trailed off into a faint snore. Of course it was him, but she didn’t expect an answer since her one-time heartthrob was passed out on the threshold. One-time heartthrob? Who was she kidding? She’d been mad for him but he wouldn’t give her what she wanted. No one would believe her if she said Rob refused to take her cherry. But he had refused, after she’d done everything she could to make him lust after her body.

She leant forward and touched his bare head. What happened to his thick, blond hair? She loved the way it waved so tightly it felt crisp to her touch. Had he just been released from prison? Or worse, escaped? Kitt’s heart pounded and she again pressed a hand to her chest. Feeling faint, she leaned close and shouted, “Rob? Why is your head shaved?” She shook him by his shoulder. “Answer me.”

He didn’t even blink. The lower half of his body lay on the front porch, the upper part in the entryway, and he reeked of liquor. One whisky too many, indeed. One bottle, maybe. But then he hadn’t said ‘one drink’.
She stood, hands on hips, and pushed the toe of her sneaker into his ribs. He rolled over onto his side. Grinning, he blinked and his eyes lolled shut again. He wasn’t a heavy drinker as far as she knew, so why had he tied one on tonight?

She shouldn’t even try to figure it out. Nothing Rob Harrison did should surprise her, and yet, it always did. The real shock this time was that he’d shown up at Aunt Sugar’s the day after Kitt arrived for a visit. She hadn’t seen him in twelve years and had almost given up hope she ever would again. She shouldn’t want to, but she couldn’t forget Rob and the way he made her feel.

Now, here he was, close enough to touch. If he were awake and sober, she’d gladly lay down beside him. Better yet, she’d throw herself on top of him, her body against his. She used to press against him to feel his hard-on when they stood close to one another but as much as she aroused him, he’d always resisted her.

Rob Harrison was the thorn in Kitt’s side, the nightmare that woke her, and the love song that made her cry.

“Who’s that, Kitt?” her aunt called from the den where she was stretched out on the daybed, per Kitt’s instructions to rest.

Outside, a huge moon lit the sky. Shining through the open door, it cast gentle fingers of light across Rob’s wonderful face. Recalling the brilliant blue of his eyes, she wished he’d open them wide, but when he did, they’d have to talk and she didn’t know what she’d say. Nor what he’d have to tell her.

“Rob?” she said, gently. Damn, he was sexy, even in this sad state.

She’d always believed he was a good person inside but what if she’d been wrong? What if he was on the lam, either from the law or another woman he’d put under his spell? There had always been girls chasing him in high school and she was sure he’d left a trail of beautiful, heartbroken women wherever he’d been since.

Kitt ran her eyes over him. Broad shoulders, bulging abs, narrow hips. She fastened her gaze on the fly of his pants and wished she could see what lay beneath it. She’d longed to see him naked but the most he’d ever exposed to her was his muscled chest with a sprinkling of blond hair. She’d touched that soft mat but he’d always brushed away her hand before she could rub his nipples the way she intended.

Summer, aptly named, loves sunshine and water, palm trees, and fragrant tropical flowers.  So, it’s no wonder, she and her sweetheart now live in Florida—and love it.

Her favorite pursuits, other than reading and writing, are boating, shelling, and shopping—with shoes and earrings her major weaknesses.  Seafood, especially scallops and lobster, and big leafy salads are her favorite foods, but she loves finding new restaurants where she can try unusual dishes.

Summer has a BA and MS and has worked in sales, finance, and education but now spends her days writing and otherwise enjoying life.

Email ThisBlogThis!Share to TwitterShare to FacebookShare to Pinterest
Labels: Bad Boy Back in Town, Breaking the Rules, decisions, Engaging Deception, Let Me Entertain You, Summer Jordan

I'm sorry I wasn't here earlier to welcome you! Thank you so much for being my guest. I love the excerpt, and definitely know what you mean about bad boys... can't help but love them!