A Visit to Lido Key

I’m pleased to announce the release of my new romantic mystery, Lido Key, from eXtasy Books. This is the second in the Vic Fallon series I started a year ago with The Bundle, but it isn’t a sequel or follow-up. This is a stand alone entry in the series, and it evokes the pulp fiction style of Chandler, Spillane and Westlake. All of the elements are here – tough romantic hero, sexy heroine who’s hard as brass on the outside but soft in the middle, vivid atmosphere, a supporting cast of shady characters and liberal doses of hot sex. 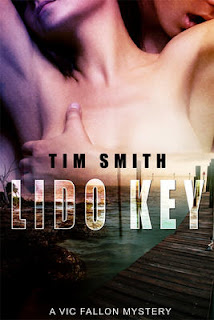 Vic Fallon has worked on some strange cases since he left the police force to become a Private Investigator, but when a former lover asks him to look into a bizarre blackmail demand, it’s one for his memoirs. Vic hasn’t spoken to Ariel Weston since his last trip to Siesta Key, Florida three years earlier. The end of their affair wasn’t amicable, and Vic swore that the next time he saw Ariel he’d drown her with the nearest Pina Colada. When Ariel gets caught up in a potentially embarrassing sex scandal, she appeals to him for help. Vic reluctantly agrees but finds himself in a real quandary when he realizes they still have feelings for each other.

The case pulls Vic out of his northern Ohio comfort zone to the Sunshine State, where he crosses paths with a corrupt local cop, a famous writer with a taste for booze and women, and a sleazy strip club owner who knows more than he’s letting on. Throw in one very cute Latina who develops a crush on him, and the puzzle gets more complex. Can Vic solve Ariel’s problem before the blackmailer ruins her life? Will Ariel succeed in convincing Vic to give their failed relationship another chance?

To prepare for this I watched a lot of film noir crime capers from the forties and fifties. Quirky characters, moody atmosphere and witty dialogue laden with double entendres are part of the charm and I wanted to recreate that in a modern setting. Here’s an example, where Vic has a flashback of meeting Ariel for the first time:

Their initial meeting had happened on his first night in town, at a place called The Daiquiri Deck in Siesta Key Village. Vic hadn’t been actively looking for a hook-up when he went there after a day of beachcombing, but when he locked eyes with Ariel Weston from across the bar there was no escape.

Vic moved to the stool next to hers, drawn in like a marlin hooked by a determined fisherman. “Excuse me, Miss, but I’m new in town. Could you please direct me to your house?”

She began with a chuckle that escalated into full-blown laughter, then she playfully smacked Vic’s forearm. “That’s so lame, it’s cute!”

Her eyes scanned him up and down. “I don’t think I’ve seen you around here before, have I?” she asked in a low, smoky voice.

“No. Do I need a reservation to sit here?”

She laughed again. “A smart-ass. I like that quality in a man. Where are you from, smart-ass?”

“A whole other world. Would you like me to provide references before we go any further?”

She placed her hand on his on top of the bar and drilled his eyes with hers. “I don’t think that’ll be necessary, but since we’re going to be friends I think I should call you something more formal than smart-ass.”

“Are we going to be friends?”

“Unless you think you already have enough of them.”

“You can never have enough friends. Why don’t you call me Blake?”

“Is that your real name?”

“No, my real name is Vic. I just use Blake to fool people. What should I call you besides totally hot?”

“Thank you. I’m rather attached to it.” She massaged his hand. “I should tell you something, Vic. I’m married to a rich older man, we don’t have any kids and we’ve always had separate bedrooms. He doesn’t really notice if I’m not home, since he’s only there long enough to change clothes before he meets his latest girlfriend. He doesn’t ask me any questions and I don’t grill him about where he drops his pants. Does that bother you?”

“One man’s ignorance is another man’s bliss.”

“Ooh, a clever smart-ass. That’s another quality I like.”

“And we’re just getting started.”

Ariel cupped his face and kissed him, probing his mouth with her tongue. Vic inhaled her scent, which triggered memories of their previous encounters. He devoured her mouth and ran his palm along her smooth back. Ariel pressed closer and moved her hips against his.

She stood back, reached around to unfasten her top and shrugged it off, then wiggled out of her bikini bottom. “You don’t want to go for a swim fully dressed, do you?”

Vic quickly stripped off his clothes. He gazed lustily at Ariel’s still perfect body. Her 36C breasts were firm, her stomach was flat and there were no tan lines gracing her trim physique. The bikini wax she’d gotten earlier left her pubic patch in the shape of a heart, and trimmed close. Ariel placed her palms on her chest and slowly moved them down her body, pausing to squeeze her nipples. She continued until one hand rested on her stomach and two fingers of her other hand snaked in between her legs. She ran her middle finger along her slit while closing her eyes and purring softly.

“You still remember your moves, don’t you?” Vic asked.

“Mm-hmm. I know this always made you hot. Does it still make you hot?”

She moved closer, dropped to her knees then took his cock into her mouth. She stroked him with her hand while her skilled, seductive lips worked over him. Vic closed his eyes and enjoyed what she was doing to him. Ariel’s mouth moved further along his hard cock, taking more of him until his swollen head rested at the top of her throat. She snaked her other hand in between his legs and lightly tickled his balls, which had tightened in anticipation. When she felt Vic begin to swell in her mouth she stopped sucking and stood.

“Not so fast,” she whispered.

She took his hand and led him down the steps into the pool. They stood in the shallow end and embraced. Vic kissed her while his hard-on poked her midsection. Ariel’s hands went to his shoulders, rubbing his flesh while she moved her hips against him again. Vic was getting more into her heat as a dozen lusty scenarios crowded his mind.

Ariel took a step back, grabbed his hand then led him further into the warm water. When they were several feet in she began a leisurely backstroke to the other end, then rested against the deck. Vic swam to meet her and held on to the tile. Ariel kissed him again while lightly fondling him under the water.

Vic pulled his face back and placed his free hand on her neck. “Ever kill anyone?”

“Because you’re teasing me to death.”

Ariel chuckled. “I like to make you wait for it, tease you until you can’t take it anymore, until you just have to have me.”

If you’re in the mood for a blast from the past with a contemporary twist, pour yourself a glass of Scotch, prop your feet on the desk, tip back your fedora and enjoy Lido Key.

It’s the stuff dreams are made of.

Thanks for having me today, Lisabet. I'm glad you enjoyed the excerpts. I had a lot of fun using the noir theme in a contemporary setting.

The title Lido Key sure caught my eye since my current WIP is set on Longboat Key! Sounds like a fun book. M. S. Spencer

M.S., that's interesting because part of "Lido Key" takes place on Longboat Key! When you have a great location like that it's a shame to waste it.