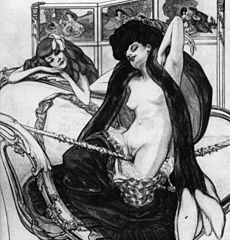 I discovered all sorts of fascinating facts about sex in history while researching for my novel, Rough Surrender. Some of it made the grade and became a part of the story. Some I meant to put in but forgot to. Of all the colorful facts that got left out, the one I most regret not mentioning was Franz von Bayros. One of his illustrations was supposed to grace the walls of Leonhardt’s bedroom. You’ll see why if you go and check the links below.

But I do think many if not all of his drawings are beautiful pieces of pornographic kinky art. And I'm sorry, Leonhardt for not writing in one of those for Faith to look at while you flogged her. Actually, I think she was blindfolded, so that couldn’t have happened.

A little quote from that scene in Rough Surrender:
*******
Then he stood and got her to do so as well, drew her dress over her head. Undid her corset and removed it. Undressed her, divested her of jewelry and let down her hair so as to gather it into a ponytail, explaining that the pins might be dangerous if they got in the way of a flogger.

He put his hand at the base of her neck and caressed her collarbone while she considered rolling the word, sphinx, off her tongue.

“You’re perfectly safe, Faith,” he said, clipping a black leather cuff about each wrist. “I’ll only hurt you as much as you want me to.”

Well then. The breath hitched in her throat. That was all right. Wasn’t it? She swallowed past a lump, raised her wrists to look at them. The night had gotten…interesting.

*******
However spanking literature did get a mention in Rough Surrender:

“Intriguing.” Leonhardt gave her foot a last squeeze then let her lower her legs. “Though not surprising given your taste for adventure. Paris is a hotbed of lesbians and the nouveau flagellation movement -- you can’t turn a corner in some bookshops without a spanking book falling on your head.”

“Um. Yes. I had noticed.” Using a fork, Faith toyed with the last of the waffle on her plate. 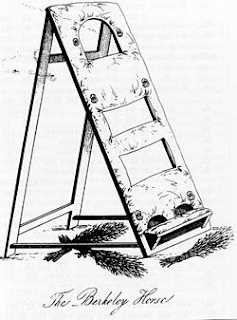 Though I cannot imagine this being a common discussion at the breakfast table, there was a plethora of spanking books around 1910. Even before this time there was a well-known establishment where men could go to get their own spanking or flogging kink on. One of the first devices for restraint was from then - the Berkley horse above. If you’re keen, you can buy copies of some of this early spanking literature on Amazon, and probably at antique book stores that don’t mind stocking such books.

In the 1820's if you were a customer of Mrs. Berkeley  you could choose which implement was used on you, as well as the amount of injury to be inflicted. I’m sure their customers were most satisfied.
To read more about her establishment go here

To put it in perspective, people have always been kinky. I think it’s hard-wired into the minds of some of us. So it stands to reason, even the ancient Egyptians would have had their kinks. They just forgot to chisel it onto the walls of the pyramids. Or maybe they did, but someone chiseled it out.

Rough Surrender was just released on June 4th from Lyrical Press. Leave a comment,  and you might win a copy of your very own! Don't forget to include your email address.

At a time when airplanes are as new-fangled and sensational as the telephone, Faith dares to fly. The one territory she has not explored is her own sexuality. In Leonhardt she discovers the man who can teach her how a woman surrenders her body and her mind. However, Leonhardt has a shadowed past and his own learning to do. He doesn't have the right to keep Faith from flying, even if he thinks airplanes are flimsy death-traps made of canvas, timber and their inventor's prayers.

Faith has her limits, Leonhardt has his flaws, and sometimes the nicest people get murdered by unscrupulous bastards. Even if Leonhardt can save the woman he loves, the battle for Faith’s heart will be the hardest one of all.

Welcome back! I always love your posts. They're simultaneously erudite and outrageous!

Haha. I try to be different. And shocking your readers takes some effort. ;)

There is kink all through history if you look hard enough. Thank you for reminding everyone that this is not exclusive to our time period.

Great post. Love a chance to win. kbmckee at mail dot com (no g in that mail.)

I'm trying to figure out how the horse works, the dimensions don't seem quite right. Thanks for the links, I've not come across his work before, the snail's really clever.

Love the Post. As one who has some early Kink Books. I love to read about Authors using them for research. Love a chance to win a copy of your Book. Loved the Article. Ladystyx at Spatialfrustration dot Com

"One hundred years ago people had sex."

Best opening line EVER! Seriously, though, great article - I love reading about the history of sex.

Great article. The book sounds interesting. It sounds like a book to add to my collection of historical sex books. Love reading about the past.

Congrats on your release! Thank you for sharing with us today... a very interesting post!
greenshamrock AT cox DOT net

Your new release sounds very interesting. Thank you for sharing with everyone.

Informative post! I knew there was kinky sex in Queen Victoria's time, but I hadn't seen an image of the Berkeley horse. the novel sounds fascinating.

Lol
Who knew there were so many lovers of early kink?
And Sally, thanks ;)

If anyone is interested, this is the link to the book's dedicated website. http://roughsurrender.weebly.com/
There's a bit more about everything there. Not just history.

DawnM , yes, the snail drawing was clever, if very strange!
If you've not seen that one. It's a naked woman riding a snail that is really a phallus. The link to Franz Bayros has that illustration. She has a riding crop too lol
And I think she's kissing it! :)

Hi Cari: It must have been interesting doing your research for your book. Did you go to your local library or did you have to do a lot of surfing the net? Congratulations on your release.

Interesting post. Bayros was very detailed in his drawings with the elabornate hair-dos and big hats. Thanks for sharing.

Congrats on your release Cari. Wow Franz sure did love to draw some girl and girl action. Lol
rasco630@yahoo.com

I have? Maybe I'm a brat after all. lol

I had no idea it would be this interesting. Yes Franz did like the girl om girl action a lot, Tameka.

Romance reader, I found all this on the internet. My local library would most likely frown on this research :)

One of the things I only realized recently, since after the book released, is that most of the women Franz drew have no pubic hair. So I'm wondering if most of the women he had seen naked had removed it? I know it was done for hygienic reasons in some societies throughout history, and Muslim women have done it for a long time in history.
But, was it more common in the 1900's than we thought?

Thank you for all your comments. The winner of the ebook copy of Rough Surrender is She.
Congratulations!