Bound by Lust: The Beating of Kinky Hearts 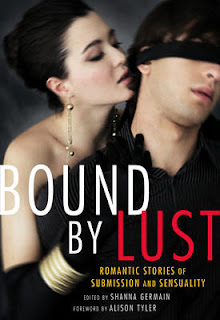 When I’m not writing sexy stories or getting naked with the one I love, I can usually be found playing online role-playing games (like the geek that I am). While role-playing games are a draw for me in terms of creativity and storytelling, they’re also a draw for me due to their thriving alternative community. Because online games offer a (fairly) safe and anonymous way to try out different orientations, kinks and genders, they attract huge numbers of people who want to experiment, explore and learn more about their sexualities. A lot of players create characters that are bisexual, gay, submissive, dominant, or somewhere in between. Furries and demons and tentacles abound in sexual scenarios. Some online communities even cater to the large BDSM gaming population with in-game props like paddles, whips and handcuffs.

But it isn’t just the player’s characters who are exploring their sexuality in role-playing games. Often the players behind the toons go “out of character” to talk to each other about sex. Because I play in a way that isn’t entirely anonymous (many players know that I write erotica), I often find myself fielding intimate questions about sexuality, and particularly about kinky sexuality.

Once, while talking to a younger player whose character was a slave trader known throughout the game for being a kinky dom with a penchant for bondage and pain, he mentioned something about his real-life girlfriend. During the conversation, it came to light that he was, in his words, “only dominant in-game. In real life and real love, I’m strictly vanilla.” While that didn’t entirely surprise me – gamers often play characters that don’t share our exact interests – the phrase “in real love,” wasn’t one I’d heard before.

It was only later, during another conversation, that I gained a clearer understanding of what he’d meant. He said he was going to have to stop playing the game, because he’d asked his girlfriend to marry him and she’d said yes. I still didn’t get the connection. “Because you can’t have that kind of sex when you’re married,” he clarified. “Kinky sex is great for a girlfriend or a game, but not for love.”

That was the first time I’d heard someone put it in those terms. At the time, I’d chalked it up to the misunderstandings of youth. Since then, however, I’ve heard a number of people of all ages lament their inability to have both kink and romance. They don’t believe it’s possible to have both in the same relationship. As I mention in the introduction to Bound by Lust, it’s a modern version of the Madonna/whore syndrome. You fuck the kinky girl, but you marry the vanilla one, and ne’er the twain shall meet.

Of course, this is a fallacy. Those who have found both – either in the same person or in an open relationship that meets their needs – know that naughty and nice are two sides of the same coin, or in this case, the same person. And it pains me to think that there are people in the world who believe the two are mutually exclusive, and are going without one of those things in order to have the other.

That conversation with my fellow player, and with other kinky friends and colleagues, was a large part of the inspiration for Bound by Lust. I wanted to create a book that, first and foremost, was incredibly sexy and dirty. But I also wanted to create a book that would give hope to kinky romantics everywhere, a book that would showcase all the ways in which dirty sex and sweet love can be true bed mates. Some of the stories in Bound by Lust highlight that tender and scary moment where a loved one comes out of the kink closet in the hopes of finding acceptance in their relationship. Others show long-term loving couples who are happiest when binding each other both physically and mentally.

Alison Tyler says that “Bondage With Someone You Love” should be a category of Hallmark cards, and I fully agree. Whether we want to bind and spank the love of our life, cross dress with our wife, or go down on our knees for the man who holds our heart, we can have it all.

Bound by Lust isn’t just a book title; it’s a possibility for every one of us with kinky, romantic hearts.
Posted by Lisabet Sarai at 3:30 AM

Thanks for being my guest today!

I'm looking forward to reading Bound By Lust, especially given the theme. In my personal experience, it's pretty difficult to have a serious kinky experience (serious in the sense that it touches something beyond the physical) with someone you do not know well. There's a romantic kick to recognizing that a stranger is your dream Dom, but in the real world, trust takes time and kink takes commitment.

Thanks so much for having me, Lisabet! Donna George Storey and I were just talking about the difference between real-world and fantasy-world dom discovery at the reading. So much of erotica shows the fantasy element, where you meet a stranger who knows your every desire more than you do. Which is an absolutely sexy idea. But you're right -- time, commitment and communication are so vital to building that kind of trust!

Great post, Shanna. Out of interest, which games do you play? I haven't seen many whip and paddle props on WoW. Second Life?

WoW is really devoid of props, I agree. I think the best is probably EQ2, which really seems to cater to the kinky crowd with weapons, outfits, and house furnishings (there are bondage chairs, cages, and whipping posts).

I know that Second Life also has a large segment of kinky sexuality -- and that you can actually create all kinds of toys -- but I found that it wasn't enough of a game for me. I like to go out and kill things when I'm not RPing :)

What a great point you’ve made. “Kink and love are not mutually exclusive.” Yes you can have it all!

Unfortunately, there is still the belief that that you could only perform certain sexual acts with your wife or the woman (man) that you love and the "dirty" ones you save for your mistress or one-night-stands. A pity really when you stop and consider the fact that you’re limiting your relationship before it’s fully grown.

I once did a poll asking “Why men wouldn't share with their partner's that they were interested in kink and BDSM?” The major response was “fear of rejection”. Men felt if a "stranger" rejected them, they'd be able to overcome it. However if their spouse or loved one rejected them, they'd be crushed and possibly lose all they had hoped to build with their loved one. Yes, the same can be said about women fearing rejection. Ironic that advertisers use sex to sell us everything from vitamins to shoes and yet society as a whole is still so sexually repressed.

I’m thrilled by the types of stories you’re writing. Coming out of the kinky closet is terrifying, having tales of motivation and encouragement is inspiring. Just got your book, Bound by Lust, can’t wait to start reading it.

It's so sad to think that people compartmentalize their sexuality and emotions that way. Of course I know they do it, but I can't imagine not sharing my kink with the one I love. I wouldn't be whole without it and neither would the relationship. Coming out to your lover, life partner, husband, wife, girlfriend, boyfriend is very probably the scariest thing you can do, but if you are truly a kinky person, you have to realize that you won't be happy without it, no matter how much you love someone.