To Protect and Serve – D/s Style

Dominance and Deception’s protagonist is a homicide detective named Zach Pierce. He’s sworn to protect and serve within the police force, but does that mean a little more to Zach than to his colleagues?

Well… most of them. Faye can be a little bit of a handful, which Zach finds out very quickly… 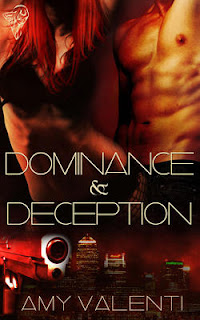 Try to get free.”

Obediently, Faye writhed on the bed, tugging at the handcuffs that restrained her wrists and the silk scarves I’d used to tie her ankles to the bedposts.

“Can’t, Sir,” she said, half smiling, half apprehensive, as if she was unsure whether the response would lead to reward or punishment. Hell, with Faye, the punishment usually was the reward.

I didn’t keep her in suspense. “Good.”

When I brought the riding crop up into her line of sight, her eyes widened and she bit her lip, a shiver of anticipation thrilling through her body. I paused for a second, giving her time to back out if she needed to, making no attempt to hide the way my eyes swept over every part of her.

She swallowed hard, her eyes on the crop. Shaking a tendril of damp hair from her cheek before answering, she nodded, her words just barely whispered.

The way she submitted, unquestioning, to my authority made me want to throw aside the crop right then. I needed to be inside her, needed to hear her beg for release, needed to lose control completely. But not yet. The scene had yet to be played out.

Faye looked from the crop to my face, and from the slight upward quirk of her eyebrow I could tell she’d caught on to my train of thought.

“Or we could just…” she said softly, shifting seductively against the mattress.

Snapped back into my role, I stared her out until she stilled and broke eye contact.

A flicker of amusement remained in her voice as she conceded, “I’m sorry, Sir. I was outta line.”

“You’re damn right,” I said, and without warning cracked the crop down onto her breast, just below the nipple.

She yelled with combined pleasure and pain, attempting to suppress the grin on her face.

I paused to let the blow register, knowing she was hardly even trying to be properly submissive. Most of the time, she let it wash over her, sinking so far into the state that it took time for her to come back from it. Tonight she was in a playful mood of a completely different kind—cheerfully insolent and willing to take all the punishment I could mete out. I already knew she’d let me whip her until she was sore all over, then defy me for just a little longer, setting her tolerance for pain against my willingness to give it.

I’ve never been one to back down from a challenge.

Faye looked down at the red mark rising on her flesh, then up at me. “That the best you can do, Sir?”

I raised the crop, never letting my pissed-off façade slip. “I haven’t even started—”

Faye’s phone rang, the unexpected sound disorientating us both. She groaned, scowling at the offending object as if it was sentient.

“Damn it! Not now!” She tugged expectantly at her handcuffs. “Okay, let me out of these.”

I stood there, impassive, and she rolled her eyes.

“Zach, seriously. Someone’s probably dead and we’ll have to go to work.”

It’s not that Faye’s a bad submissive, exactly – she just likes to test the boundaries, to know that if she steps out of line, there’s a consequence. Not to mention that stepping out of line occasionally yields very lucrative rewards…

Although Zach’s the Dom in the relationship, he learns that protecting and serving on a D/s level goes both ways – at one point, literally! His unruly sub takes an offer of carte blanche and turns it to her own advantage, pulling a switch scene on her Dom, and Zach goes from protecting and serving the citizens of the city to ‘serving’ Faye in a very different way. Mostly with his tongue. ;)

What’s a Dom to do, once he’s out of the handcuffs, at least? The punishment has to fit the crime – and a little sexual revenge never hurts anyone past their safeword limits.

Not only that, but Faye’s idea of service sometimes stretches to unusual limits. When she finds out that a male colleague of theirs is into kink, too, she suggests a little M/M/F action might be just what they need! Once Tommy Santoro comes into their bed, Zach gets about as much service as he can handle, as well as a good amount of kinky voyeurism…

But it’s not all fun and games – there’s an angstier, more dangerous tone to the final third of the novel. How far will Zach go to protect Faye, and how far is too far? You’ll have to read Dominance and Deception to find out!

She has a degree in creative writing and currently works as a proofreader/copy editor. In her free time, she reads, writes and plays video games. On the rare occasions she doesn’t have a laptop on her knee, she loves to curl up with friends and pets – and chocolate – for TV show and movie marathons.

I can easily imagine this excerpt being written by a 'tarnished tease'. I enjoyed it!!

Sounds like a must have for me. I loved the excerpt.

I love Zach and Faye! Thanks for the excerpt.

I'd be the same way. I have a smart mouth and like to push limits so I would never be able to submit completely. Thanks for sharing, I loved the excerpt.
chamblinh@gmail.com

the cover tell the story and it sound so good and would love to be his slave even for one day
desitheblonde@msn.com

Thank you so much for your comments, everyone! I'm so happy you like it! :D

oh my! sounds sooo good! i love how faye tries pushing zach. lol this is a must get! cant wait to read more. :D
shadowluvs2read(at)aol(dot)com