It's Sunday once again, time for hot excerpts featuring the application of lips... Thanks to Victoria Blisse, Sundays have become a good deal hotter!

This week's Sunday Snog comes from my short story "Chemistry", originally published in the anthology Coming Together: With Pride, a charitable anthology benefiting AIDS research. "Chemistry" has a rather non-traditional hero. He's kind of old, and not at all buff, but I adore him. 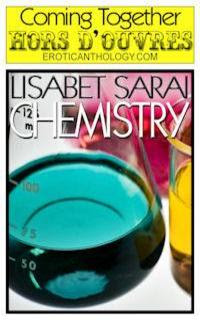 Kit is a workaholic, a brilliant pharmacological chemist who is driven to succeed. She wants a life that is controlled, disciplined, and predictable. When she meets Frank, her hairy ex-hippie neighbor, she's inexplicably and irresistibly attracted to him, though he represents everything that she despises. She tries to fight her own desire, but discovers that sometimes, chemistry trumps rationality.

The beads clicked together as Frank returned holding two steaming mugs. "Here you are, then." He seated himself on the stool next to her, close, too close. Invading her personal space.

"I don't..." Kit began. But the rich aroma of the coffee made her mouth water. Just this once, perhaps.

"Sorry, I don't have any milk, but there's sugar." He pointed to a ceramic bowl molded in the shape of a peace sign. He dumped a heaping spoonful into his own mug.

"Uh, no thanks." She took a tentative sip, then drank deeper. The flavor was earthy and complex. She could feel the caffeine racing through her blood.

Frank was staring at her again, his eyes twinkling behind his wire-framed glasses. Absently, he scratched his unruly head. She could tell that he hadn't showered.

"I guess, then, that we're neighbors."

"Yes, well, I don't spend much time at home." She licked her lips nervously. "Mostly, I'm at work."

"You work too hard, I think. You need to take time to enjoy life." He rummaged in his pocket and she caught another glimpse of his scrotum and his half-hard cock. Hastily, she turned to examine one of the posters.

"Want to do a number?" He was holding out a fat hand-rolled cigarette. Kit felt a sudden panic.

"Oh?" He lit the joint himself and drew in a lungfull of the fragrant smoke.

"Yes, well, I work for a pharmaceutical company."

He took another toke and held it, closing his eyes. His expression was beatific. He reminded her of some hairy elf, or perhaps a giant, grizzled teddy bear. The smell of pot smoke drowned out the incense. Kit felt dizzy.

Frank stubbed out his joint. "Stand up -- what's your name?" His voice was soft, dreamy.

"What's that short for?"

"Oh, I like that much better. It suits you. I've always thought that ladies should have long, intricate names, names that dance on your tongue. Stand up, Katerina. Please. Let me look at you."

She felt brief indignation. Nobody told her what to do. Yet she obeyed, coming to her feet in front of him, so close, too close, the reach of bare skin between her top and shorts inches from him. She was light-headed, not herself.

"Katerina," he whispered. Then he reached out and grasped her buttocks, pulling her to his face.

His beard was softer than it looked, tickling her. For a moment he simply held her, breathing in, inhaling her as if she were another drug. Suddenly there was shocking wetness. His tongue circled her navel, dipped inside. Her sex clenched in a sudden, delicious spasm. He lapped in widening circles, then traced a wet path up her sternum. When he reached her bra, he deftly peeled back the stretchy material to expose her small breasts. He fastened his mouth on one swollen nipple. Kit moaned, embarrassed by her sudden need.

He sucked at her till the node of flesh was unbearably tender. Just when she couldn't bear any more, he switched to the other breast, strumming the rigid bead at its tip while her clit vibrated in sympathy.

"Oh, please...", she sighed. Her shorts were sticky and uncomfortable. She wanted them off.

Frank paused and smiled at her. "Just a moment, Katerina, if you can be patient. I have something for you." He scurried off to the glass display case, a comic figure, his shorts slipping down his hips to expose his furry butt. Her belly and breasts were soaked with his saliva.

Kit shuddered, desire mixed with revulsion. How could she let this smelly, hairy, untidy, old -- anachronism -- touch her? But God, it felt so good. Her cunt was sopping. Her pussy scent overwhelmed the smell of pot. I should go, she told herself, get out of here while I can. But Frank was back now, pulling her bra over her head, fastening a delicate silver chain around her waist. He eased her shorts over her hips. She kicked off her shoes, and he shimmied the lycra garment down to her ankles and off.

Kit stood before him, naked except for the ornamental chain. The silver strands brushed, ghostly, against her sensitized skin. Frank licked his lips. His eyes burned blue as gas flames; she basked in the heat of his obvious lust.

"Oh, yes," he breathed. "I thought that would suit you. Yes indeed..." His fingertips traced an airy path across her skin, touching but not touching, setting up currents that caressed her throat, her breasts, her belly, the smooth mound between her legs. "I don't know why you do it, though."

"Do what?" Kit almost groaned with frustration, as he appraised rather than caressed her.

"Shave, wax, whatever it is you do to remove your bush. A bare beaver looks so -- unnatural."

Annoyance almost overwhelmed Kit's horniness. "Well, I haven't had any complaints from anyone else. Also, without the hair I'm more sensitive."

His mischievous smile returned. "Oh, is that true? Well, then..." He slipped to his knees and peeled open her lower lips with his thumbs. "I've always enjoyed sensitive women."

You always make my Sunday's hotter, thanks for joining in the snog!