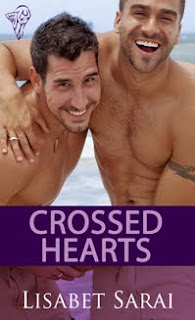 For the past six years, Jason Hofstadter has attended the Four States Annual Scrabble Tournament. Jason comes to the Four States for two reasons: to play Scrabble and to get laid. Every year since his first, he has managed to hook up with one of the other players for some sexual fun. This year he has a chance at the grand prize in the tournament. Meanwhile he figures that he has hit the jackpot when he spots handsome, bookish Matt Sawyer, who's competing at the Four States for the first time.

The elevator doors had scarcely closed before Matt was on him, arms like steel bands locked around Jason's body. Matt's mouth was hard and demanding, not at all what Jason expected. His tongue pried Jason's lips apart and plunged inside. Hands roamed down Jason's back to grip the swell of his butt. Strong fingers dug into his flesh, pulling his hips against the stony lump in Matt's crotch. Friction sent white-hot jets of pleasure sizzling up his spine.

He tasted the berry-flavoured residue of Matt's wine. He smelled the rich funk of dried sweat from their afternoon jaunt. He clutched at Matt's shirt, pulling it up so he could slide his hands over the contours of the other man's naked back, smooth as sun-warmed marble.

Matt pushed him against the mirrored wall, releasing his mouth to lick a path down his neck to the hollow of his throat. Jason sucked in his breath as Matt pinched his nipple. A star of green pain bloomed then ripened to golden delight. Matt ground his erection against Jason's thigh, his own thigh pressed firmly between Jason's legs. Jason's dick pulsed helplessly against the hard limb that held it captive.

His eyes fluttered open. He glimpsed their reflection in the opposite mirror, over Matt's shoulder. Matt's head bent to Jason's chest, suckling him through his shirt. Jason's hands were buried in Matt's loose jeans, stroking the boy's silky butt. Their bodies squirmed in slow motion as each tortured the other's trapped penis. It was beautiful and obscene.

The lift chimed as it reached Jason's floor. The doors slid open. They tumbled out, hands still tangled in each other's clothing. The corridor appeared to be empty—hopefully, everyone was down in the ballroom, listening to speeches, watching videos of last year's highlights. Matt caught Jason again, halfway down the hall, flattening him against some stranger's door and claiming his mouth.

"Wait--Matt, hold on, just a second..." Matt stole his breath. Jason couldn't talk, couldn't think. He was ready to explode. He struggled out from underneath the younger man's weight and half-dragged Matt down to his room at the end of the hall.

He fumbled for his wallet in the pocket of his tight jeans, every motion transmitted to his aching dick. He managed to extract the key card, while Matt circled Jason's waist from behind and rubbed his cock up and down Jason's crack. Jason's hand trembled as he tried to slide the card into the slot. The light remained red. "Matt, please! I can't do this..." Matt reached down between Jason's legs, stroking then squeezing. "Damn it, Matt!" Jason protested, weak from the pleasure that shimmered through him.

Finally, the LED turned green. Jason wrenched himself from Matt's grasp and pushed the handle. The door swung inward. The two men fell into the room and collapsed onto the bed.

Leave a comment to enter the Backlist Blog Bash drawing!

I will NEVER think of scrabble in the same way again. Loved the word "shimmered".

Oh, what a great excerpt. I'm adding this to my must have list!