Thank you, Lisabet, for allowing me to be a guest on your blog.

Recently I’ve been thinking about muses. Stephen King refers to his muse as “the boys in the basement”:

“The boys in the basement are they guys who actually do my heavy lifting. They're the muses. And we have a picture of muses as being very ethereal creatures, but I think they are nonunion labor. They are hard working guys with Camels rolled up in the sleeves of their shirts.”

He’s talking, I suppose, about his subconscious – that bit of your mind that keeps working on a story even when you think you’re thinking about what to make for dinner or where you left the car keys.

Because although I do talk about my muse – mine’s a madwoman in the attic, not a boy in the basement – I don’t honestly believe there’s any such thing.

Piers Anthony’s take on the whole thing seems more sensible to me:

“One reason I don't suffer Writer's Block is that I don't wait on the muse, I summon it at need.”

That makes sense. The muse isn’t really an elusive lady with fairy wings who has an inexhaustible supply of fantastic story ideas but sometimes goes into a strop and refuses to share them with you. She’s a bit of your own brain, and I believe that, with practice, you don’t have to wait for your muse to visit – you can go in and drag her out, kicking and screaming.

For a chance to win a copy of my new release, Temporary Trouble, written by dint of giving my muse a sound spanking and a thorough talking-to, leave a comment telling me about your muse.

And to whet your appetite, here are the heroes of Temporary Trouble getting some disciplinary action of their own. 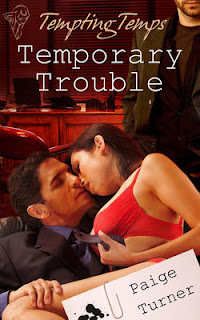 Ben felt stupid over Aaron’s lap with his arse in the air, but he also felt restless and unbearably aroused. Aaron’s stiff cock twitched against his belly and he stifled a moan as the other man shifted beneath him. His ankles were constrained by his trousers and boxers, and as he was using his hands to support himself, he was left more or less completely helpless.

And Aaron—God help him, Aaron had dropped his hand onto his backside and was rubbing his cheek, playing his fingers over it in a way that sent shivers up and down his spine. He squeezed and caressed the flesh, his hot skin, damp with anxiety, a sensual contrast to the cool air of the office on Ben’s naked buttocks.

Ben could feel the blood rushing to his head as he lay there, but more than that it was pumping into his erection, making him longer and thicker, his arousal straining hard against Aaron’s thigh. The rough fabric of Aaron’s trousers felt unbearably good against his skin and he stretched and flexed, trying to ease some of his painful excitement. He curled his fingers into the rich, plush pile of the office carpet. The tension—the waiting—was killing him.

“Mr Jones.” Ms Kain’s voice was husky with desire. “Aaron. You are going to spank Ben. To punish him for being such a naughty boy.”

“Yes…” The raw need in Aaron’s voice was echoed in his own body.

“You do agree that he has been a naughty boy?”

“Yes…” Ben closed his eyes at the unspoken desire in that single word.

“You will give him what he deserves.”

Ben could feel Aaron’s juddering breaths through the whole of his body. His own breath was becoming erratic and elusive, difficult to catch.

“You will smack his arse five times. For the fire alarm.”

Aaron dug his fingers into Ben’s buttock, a desperate clutching that told Ben he was on the very edge.

Aaron continued to clutch at Ben, his fingers all but spasming on his flesh.

“One,” Ms Kain repeated, and Ben heard a shuddering intake of breath and felt a light smack on the lower curve of his arse cheek. There was no pain—just a slight, tingling warmth that made him squirm and wriggle in Aaron’s lap.

The second blow was more assured, less hesitant. The warmth spread, running down Ben’s thighs and up to the base of his spine. He gasped and craned his head back, trying to see Aaron, trying to see Ms Kain, but he couldn’t. He let his head drop again, biting his lip. He kept his eyes on the carpet, but his gaze was barely focused. All his attention was on the sensations Aaron’s firm smacks were inflicting on his upturned rear.

This time it stung, and he gave a little cry of arousal—half pleasure, half pain. His dick ached, but he was essentially helpless, keeping himself precariously balanced with his hands while Aaron administered his punishment.

Was Aaron smacking him harder, or did the blows just seem harsher on his already sensitised skin? His skin was hot and tight, and he could almost feel the pink marks where Aaron’s cupped fingers had landed. He imagined a red handprint on his buttock—Aaron’s long, slender fingers branded onto his skin.

He heard a rustle of clothing, and he wondered if Ms Kain was touching herself, working those manicured fingers into her knickers as she watched. The thought kicked his heart into high gear. He heard her take a little, sharp intake of breath before she said, “Five.”

He braced himself for the blow, because he knew it was going to hurt…and it did. It stung, and started up a spreading, throbbing ache in the tender flesh of his bottom—but that just seemed to make him hotter and harder. He gasped and rolled off Aaron’s lap as Aaron stood. The pile of the carpet abraded his sore skin, and he laid on his back looking up as Aaron and Ms Kain fell into each other’s arms, their hungry gasps and moans going straight to his jutting cock.

BIO: Paige Turner likes to write love stories with a difference. Whether it’s boy-meets-girl, boy-meets-boy or werewolf-meets-vampire, she thinks everyone deserves a happy ending. She lives partly in England but mostly in Cyberspace. She enjoys dreadful puns and naughty stories, and believes the best way to have a good time is by being bad.

Posted by Lisabet Sarai at 4:11 AM

Welcome to Beyond Romance, and congratulations on your first TEB release - which if this excerpt is any indication is very hot indeed!

Well, I hope you can pull your muse out kicking and screaming because I can't wait to see more.

Congratulations Paige on your release. Wow! Its early in the morning in Texas and that excerpt sure was a great wake me up. Thank you. My muse is still asleep right now. Its being a lazy ass. LOL!

Ya know? Honestly I'm not real sure about my muse, I'm not sure who or even what it is all I know is it might be a female and it often slips ideas into my head when I'm supposed to be asleep.

My muse also continues to put ideas into my head even after I'm awake, I guess it'll take me some time before I discover who/what my muse truly is.

By the way good luck with your first TEB novel Ms. Turner!

My muse is always hiding, in fact has never seen the light of day. I'm sure if I wrote on a daily basis she might see the light of day, oh well back to the day job. Great excerpt, nothing like MFM stories. thanks Debbie

Great excerpt! I can only imagine the story leading up to this scene. My muse puts in an appearance when I give her...coffee! That little jolt to my brain seems to kick my imagination into gear, and away we go.

great excerpt!i can't wait to read the rest of the book and see what happens next.

Paige thanks for sharing with us today... I really enjoyed reading the excerpt and this post... definitely want to read more!

Congrats! Awesome excerpt! I love the sound of you book! Hot! I dont really know if i have a muse. If i do, he/she is slacking! lol Thank you for the giveaway!
shadowluvs2read(at)aol(dot)com

My muse's name is Eileen - really. I try to listen when she's talking but I don't always get the point. But she is always trying to save me from myself! :)
This looks like an awesome book - I'm going to have to read it one way or another.

I'm delighted everyone enjoyed the excerpt :)

The winner of the giveaway, chosen at random, is Harlie Reader. I'll be dropping you a line shortly :)