Stories of Our Fathers

My son knows I read erotica, much more than that he knows I write erotica, stories that I won’t let him read just yet. I suppose by the time he’s old enough to read his old man’s stuff he probably won’t want to. Or more like he won’t make it past the first few pages before he snaps the book closed and sneers “Gross!” I don’t think my stories are all that gross if you like that kind of thing as much as I do, but what’s gross is the realization your parents are aware of sex. Reading of the act of sex in all its mammalian sweaty stickiness, and souls wrestling in the torment of passion, knowing it emerged from the keyboard tapped by the fingertips of your old man, like evil rays emanating from the fingers of the Emperor Palpatine is just . . . eewww.

But Luke - I’m your father.

Theoretically we know that one night exactly the number of your present years plus nine months or so ago your father knelt over your mother, naked, tumescent and demanding, hungry eyed and primitive as a rampant chimpanzee, and your mother, the one who cooked your dinner and scolded you off to church, who wept when you graduated high school, that woman, rejoiced at having her clothes yanked from her and body spread out nude and eager on the bed while this hovering beast nipped her neck, suckled her nipples and then shoved it right in, unhh! and together launched you into this veil of tears on a celestial fanfare of squealing bed springs, masculine grunts and low feminine groans.

Unless of course, as you suspect, you were immaculately conceived of a virgin in which case you really should aspire to a much higher calling than this one.

Try as I might, grimly at best, I can't imagine my father with a hard on. I can't imagine my mother nude, much less sexually excited. I never saw my father read pornography, much scarcer to come by in his day, and I never saw my mother, who disliked being touched, read a romance novel. She preferred history and crime fiction, and finally at the end as she descended into paranoid fantasies, nothing at all.

My father, always a well read man, when he divorced my mother had a "hippie pad" as he called it, well stocked with the books he'd been uncomfortable to read before when we were around. It was his time of busting out. Scanning his bookshelves I came across Henry Miller and Lenny Bruce for the first time and without hesitation he explained to me who and what they were and even allowed me to borrow and take them home. For intellectual wannabes, explaining Henry Miller to his son would have been the equivalent of taking him on his first mastodon hunt.

I’m not sure why it’s hard to think of our parents in this way or to write of them in this way. I don’t know if it bounces up against incest or what, but there is something definitely cringe worthy of it. The only instance I know of is Anais Nin writing in her endless diaries of her incestuous relationship with her father, whom she had hardly known otherwise as a father. In the end it’s easier to think of them like Barbie and Ken dolls, which, when nude, have nothing so much as a plastic bulge down there.

Sex and story have always been a part of our story telling tradition. As soon as human beings came across the notions of making things from other things, and then making representative art they began making erotic art. There are stone sculptures of huge breasted women, at least one cave painting of an immense cave woman straddling her lover from above. Our earliest Biblical stories, the ones you don’t hear in Sunday school, tell of King David falling in lust with married Bathsheba while seeing her bathe in the nude on a rooftop and then sending her husband Uriah to the front lines to expediently die in battle. Or of Lot’s daughters getting him drunk and committing incestuous acts with their father to make sure the blood line of their family would go unbroken. Joseph being sent to prison for refusing to have an affair with the Pharaoh’s wife. These stories mean more to me than the prophets, because these are the human stories that tell me that even if civilization changes, people are still much the same.

I’m not sure our kids will ever read our stuff, or even if they should. That’s part of the price you pay for suiting up for this game. In our many dialogues and noodlings, I've often said to Lisabet that we don’t choose the genre we write in. The genre chooses us. The book is the boss. Any story can be just a little deeper just as any person can be deeper if you allow yourself to know them. The great writers weren't any smarter than the rest of us; they were more persistent lovers of the story. They looked deeper and then looked again, the difference between making love or just passing a quick hand over life. The story is always deeper than we know. 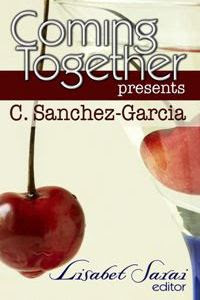 Bio: At this particular time in a wandering, often bizarre and unexpected life, C. Sanchez-Garcia is living quietly in eastern Georgia, where the size of his personal library is bursting the walls of his little house. He stubbornly believes in passion, God, sensuality and spirituality, and that a good love story is life's finest medicine for melancholy. He is the author of the erotic novellas Mortal Engines and the Color of the Moon. Coming Together Presents C. Sanchez-Garcia compiles some of his best short work, in a charity anthology whose proceeds benefit the Rape, Abuse and Incest National Network. Several of his stories have been published in several volumes of the Mammoth Book of Best New Erotica and Coming Together anthologies as well as in the Erotica Readers and Writers Association's online gallery and permanent archives. If you would like to meet him, you will find him on Facebook and at the Oh, Get a Grip! writer's blog where Sanchez-Garcia's blog appears hell or high water every Wednesday.

I do hope that Luke someday reads your work - and even more, I hope that he appreciates your talent and passion.

Interesting to hear from a male writer's viewpoint. I'm pretty sure my anti-passion parents did it in the dark with their clothes on. My mom thought about her grocery list and sighed with relief when it was over. Or, maybe not. :-)

I just want to say thanks again for all the support you;ve given me and many other writers in spotlighting and encouraging our work. You are unique.

I think my kid is growing up a little conservative about these things. So it may take a while longer. Maybe someday your kids will read your stuff too.

You nevr know, they might have surprised you. There was never any physical affection in my home when i was growing up, but when i was a little kid I found these black and white photo negatives that my father took, showing in silouette my mother nude. So looking back on that time there's always something going on.

It's the ick factor in not seeing our parents as sexual beings. We all know they had to have sex for us kids to be here but we want to pretend they never had the feelings we do. After all, they're MOM and DAD--those disciplinaries who gave us a whole bunch of rules to follow and explained sex and why you should wait until you're married to have it. We hate to think they didn't live up to the same standards they set for us.

Interesting post. I cant picture, nore do i want to, the thought of my parents having sex. Gross! I like to be oblivious and just say i came from the stork. lol Great post. Very interesting. Thanks for sharing.