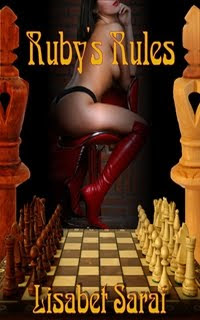 Ruby Maxwell Chen, the beautiful and ruthless CEO of a huge British business empire, is used to getting her way. When she encounters American entrepreneur Rick Martell, though, she wonders if she hasn't finally met her match.

From the trendy clubs of London to the Hollywood Hills, Ruby and Rick compete for ownership of a strategic factory in Malaysia. Neither has any qualms about using sexual wiles to smooth the path to success.

Neither anticipates that their mutual attraction will turn into something more intense and difficult to control.

"Bravo." A soft, melodious male voice, and then the sound of applause. "I'm extremely impressed."

I struggle with my impulses, close my legs decisively and try to stare him down. "I gather you were spying on me and my admirer."

"Indeed. A most entertaining and instructive tableau." He enters the balcony-space, letting the curtains close behind him, and picks up the flogger. The knotted thongs dangle an inch above my cleavage. "You seem to be quite an expert in the arts of discipline."

"Hardly," I say, taking the whip from him, trying to take control of the interaction. "I am just beginning to explore the possibilities. But," I say, my eyes narrowing to watch his reaction, "I do find myself quite sensitive to my partners' desires to yield to my power."

"I could see that. You knew what he wanted, and you gave it to him." He pauses and searches my face. "But, do you know what I want?"

"Tell me what you want," I purr. "I'm feeling generous tonight, and just might grant your request."

"I want you to take me home with you," he says with a cryptic smile. And then he kisses me.

"You seem most enthusiastic," I say, my voice surprisingly steady. "But why should I allow you into my personal space?"

"Because you want to," he says, deftly extricating my breast from its leather casing and planting a kiss on its tip. "And because you think that you will have more control on your home territory. As an interloper, I will necessarily be at a disadvantage."

Leave a comment to be entered in the Backlist Blog Bash drawing!

Bravo indeed!!! WOW!! This was a great excerpt. I want to know what happens next.

Excellent excerpt, indeed. I'm adding this to my must have list.

great cover, and super hot excerpt! i can hardly wait to read the rest of the book and see what happens next.

Lisabet, I enjoy your writing and this book is a no exception: awesome!!

sounds great! what an excerpt! i wanna keep reading! i have to get this. :) thank you!
shadowluvs2read(at)aol(dot)com