What is it that’s so hot about tortured heroes in romance? Is it that we get to watch them grow and cast of the chains of their past? That we enjoy seeing them fall in love? Or maybe the idea that someone so flawed can be ‘cured’ by love?

A tortured hero can be the product of many things, but I’m going to talk about just a few of those:

The Broken Home: His parents divorced when he was young and the psychological trauma of that is so deep that he’s sworn never to have a family of his own, or sworn off women altogether.

An Abusive Childhood: The product of sustained physical abuse from a family member, commonly the father, this man grows up to become the tough guy. He doesn’t want a long-term relationship, because look what marriage and family did to his father. He’s got a chip on his shoulder.

Sexual Abuse: This hero is so damaged that he believes he can never have a normal relationship. Worse, he doesn’t believe he’s good enough for one.

I think readers automatically tend to empathize more with a hero who has had a difficult past and who must go through a lot to find his HEA. Seeing him overcome all obstacles to find true love is very emotionally satisfying.

What about the heroine’s role in all of this? Maybe she senses a certain vulnerability in the hero that she can’t walk away from, or perhaps she faced many of the same issues in her past. Something about the hero will draw her to him, will make her want to help him heal the invisible wounds from his past.

Whatever your personal reason for liking tortured heroes, they are wildly popular in romance. They’re also my favorite kind of hero to write about!

In my paranormal romance, BLOOD OF THE DEMON, my hero Keegan is a half-demon from a dark, hellish dimension called Infernum. His father is one of the worst demons around, a man who gets off on torturing others, and who tried to raise his sons in his own image. Notice I say “tried”, because he failed miserably. Keegan and his younger brothers swore they would never be anything like their father, no matter how many times he tried to convince them otherwise (usually with his fists). They escaped him, but they still live with the emotional scars of their upbringing.

After Mammon devises a way to bring on the apocalypse on Earth, Keegan and his brothers, now working as inter-dimensional bounty hunters for the Elden Council, are charged with stopping him. To do so, Keegan may be ordered to destroy Brynn Meyers, the key to the apocalypse. But something about her arouses his protective instincts. And so the torture continues (LOL).

I’d love to share a brief excerpt from BLOOD OF THE DEMON. This scene takes place after Keegan has taken Brynn into his safekeeping. 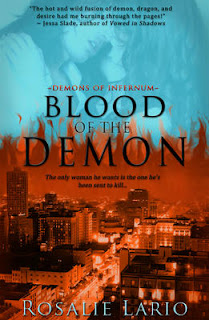 She truly believed he was a good man, and trusted him now. And if he’d correctly read the lust etched onto her face, she desired him. How could he betray her?

Keegan paused outside her room, his forehead to the door, as if by that simple act he could forge an unbreakable connection with her. For the first time since he’d broken free of his father, he wished he were somewhere else, living someone else’s life.

He didn’t want to bear this responsibility. Didn’t want to have to make a choice between this vibrant, engaging woman and the rest of this world. Maybe all of the worlds.

He hadn’t expected Brynn to be such a shining beacon of hope and life, and hadn’t expected to connect with her so deeply. If he was charged with ending her existence, if he went through with it, would he really be any better than his monster of a father?

His heart told him no. But what were his options?

One life or many?

There was no winning choice here. 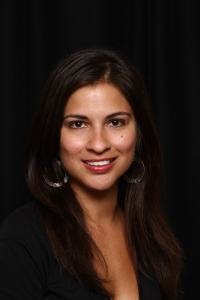 I truly enjoyed writing Keegan’s story. He has quite an emotional journey, and I hope you love reading about it as much as I loved writing it!

So tell me, who’s your favorite tortured hero in a book, movie, or television series (Zsadist, anyone)?

Bio: Rosalie Lario practiced law for five years before finally admitting to herself that negotiating contracts wasn’t nearly as fun as dreaming up stories. The first book in her Demons of Infernum series, Blood of the Demon, was released in August 2011.

Welcome to Beyond Romance, and thanks for your great post!

I agree that "tortured" heroes are often more compelling, but I do find there's a problem with stereotyping. You've hit on it yourself, with your listing of typical back stories - the Bad Childhood and so on.

Your scenario in Blood of the Demon sounds more original, though!

Hi Rosalie! I hate admit it but yes I'm very intrigued by tortured heroes although I love almost anytime of hero it's tortured heroes that gain the most empathy from me.

Ms. Sarai's post just made me think of something, is it absolutely necessary for the hero to have gone through one of the problems for him to be considered a tortured hero?

I mean, I guess what I'm asking is does what the hero went through have to be something as complicated and horrible as sexual abuse to be tortured?

Could the problem be something simpler then that?