The story is about a couple who order some sex toys from the Internet for fun. Yet when they turn up, there's been a mistake with their parcel and they've ended up with something they didn't order. In the spirit of 'trying anything once,' Sonia and Ben experiment and end up discovering a whole new angle of kinky sex play that they'd never thought of before... and they like it!

I'm happy to say that I have successfully added another smutty string to my bow and had a spanking good time about it, too. I just hope people enjoy reading Naughty Delivery as much as I enjoyed writing it!

Here's a yummy excerpt for you: 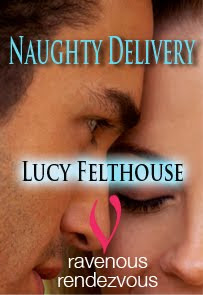 “You want to use that stuff?!” Sonia said, looking worriedly at the heavy-duty cuffs.

“Well, it seems a shame to waste it. And you’ve always said you’d try anything once!”

“Within reason, I said!”

“Come on,” Ben chided, “it’s only a bit of bondage. Let’s give it a go. I’ll tie you up first, then maybe later we can reverse roles. If we’re not into it, we’ll stop. It’s no biggie.”

Sonia looked at Ben, who copied her eyebrow-wiggling of earlier.

“That’s my girl. Now get your kit off and let me see that gorgeous body of yours.”

Sonia shifted off the bed, moving the box complete with its polystyrene contents onto the floor. She kicked off her shoes, then bent to pull off her socks. Standing, she started unbuttoning her blouse.

The pace obviously wasn’t quick enough for Ben, who yelled, “Quicker than that, come on!” Sonia looked wide-eyed at her boyfriend and considered teasing him all the more for his impatience. That would have been her usual reaction. But when he started tapping the paddle against his palm, she decided against it. He was obviously getting into character; he’d gone all masterful, getting off the bed and stretching to his full height, so he towered over her, glowering.

Sonia was surprised to discover that, far from finding Ben’s sudden dominance ridiculous or amusing, it was making her hot. They’d always been equals in the bedroom, but now the thought of being taken and ravished by Ben was causing a delicious heat in her groin that was only going to get hotter.

Shedding her clothes as quickly as she could, Sonia soon stood naked before Ben. Without realizing it, she’d also slipped into character, standing there silently and awaiting her next orders.

“Good,” said Ben, still tapping the paddle against his hand, “now get onto the bed, and spread ’em.”

As Sonia turned to do Ben’s bidding, he aimed a sharp smack at her rounded bottom, causing her to squeal and leap onto the bed. She spread-eagled herself quickly before any more spanks could be laid on her arse. As she watched for Ben’s next move, she felt the skin he’d struck grow warm and tingly. It wasn’t an unpleasant sensation, but Sonia suspected there hadn’t been much force behind the blow. Nevertheless, her pussy grew warmer at the thought of more force being applied.

Ben, still fully dressed, climbed onto the bed and picked up the wrist restraints. Shuffling up towards Sonia’s head, he knelt by her side, examining the cuffs to see how they worked. Soon, he slipped Sonia’s hand inside the faux-fur lined leather and did up the fastenings.

Naughty Delivery is a short story available in eBook format from Ravenous Romance, All Romance eBooks, Amazon UK, Amazon US, Barnes & Noble (Nook) and many other retailers.

Lovely piece Lucy and it sounds like a yummy read.

Lucy - you're expanding your horizons - and it's working...great excerpt. I agree with Sam - it sounds yummy.
You go, girl!

I like to see 'spanking' and 'light-hearted' together, being a personal fan of both. And "fun" can be pretty deep, too. Sounds like a great story. Congrats!

Looks like another great Lucy book! I'm excited to read it! :)

So sorry I couldn't be here earlier to welcome you. Evil day job intervened...!

Thanks for the comments, everyone! I appreciate it - and the positivity about my naughty little tale :)

I love light hearted explorations. This sounds like a fun read.