Too world-weary for a decent young woman … #WesternRomance #ChristmasRomance #Giveaway 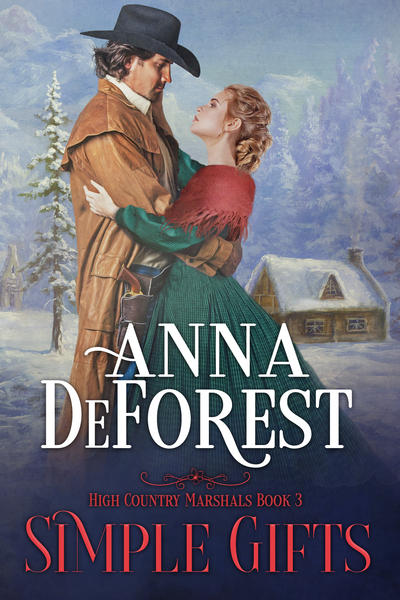 Christmas promises to be anything but merry for Robin Matthews who is waging a losing battle to keep her ranch and her family together. So when rugged ex-Marshal Nathaniel Hollister grudgingly agrees to help her run the Rocking M temporarily, he appears to be the answer to her prayers. But with Christmas fast approaching, Robin is going to need a miracle to keep from losing everything, including her heart to this kind but bitter man.

Though his attraction to her is growing by the day, Nathaniel knows he is too world-weary for a decent young woman like Robin. Once the most infamous lawman in the West, he turned in his badge after a tragedy left him guilt stricken and disillusioned. And yet Nathaniel is about to discover that the magic of Christmas has a way of making the impossible possible… and turning wishes into simple gifts that can last a lifetime.

"If you hadn't been there, I could have handled things just fine on my own. I probably wouldn't have even been shot," Robin said defiantly. She was sitting upright in her bed now, the covers she had tucked so modestly under her arms long ago forgotten in the blaze of her anger. The well-worn fabric clung to the sweet swell of her breasts.

As he stared at her, his awareness of her as a woman came rushing back in a dangerous tide. Lord, Robin Matthews was pretty when she was in a temper. Her cheeks were flushed with color and her green eyes sparked fire. With that golden braid of hair falling over her shoulder, she looked soft and feminine and far too delectable for his peace of mind. He was painfully aware that he was alone with her in her bedroom, and that she was wearing just a nightgown and not much else. He remembered how good and soft she'd felt while he carried her home, and he could still remember clearly the way her hair had smelled of roses and lavender.

A part of him wanted to take her into his arms, sink back with her into that featherbed, and make her forget all about her precious ranch. He knew she wasn't indifferent to him. He saw the small looks she slanted his way when she thought he wasn't aware. It would be good between them. He'd help her turn some of that passion she felt for her ranch toward loving, and it would be better than good.

Anna DeForest wrote her first book-length piece of fiction in fifth grade. She taught history at the Colorado Heritage Center and a Denver private school. She was thrilled when Leisure Books bought her first historical romance, Golden Dreams. She was actually watching Sesame Street with her four-year-old when she received the good news call from her agent, but she managed to tear herself away from Big Bird long enough to listen to the terms of her new contract.

Growing up in Colorado gave Anna a lifelong taste for outdoor activities such as hiking, riding and skiing. She also enjoys gardening, which is currently quite a challenge because armadillos keep rooting around in her garden in Dallas.

Anna has always tried to write the kind of romances she likes to read—stories about warm, caring people who pursue their lives and loves with passion. These days, Anna is excited about offering four of her previously published romances to her new readers, along with three romances that have never been published before. You can learn more about Anna and her books at www.annadeforest.com.

Anna DeForest will be giving a $20 Amazon/BN GC to one randomly drawn reader.

a Rafflecopter giveaway
Posted by Lisabet Sarai at 2:00 AM

Welcome to Beyond Romance! I hope your tour is very successful!

Thank you so much for hosting me. Your books look sizzling hot!

Great cover, thanks for sharing!

Gorgeous cover! Thanks for sharing an excerpt!