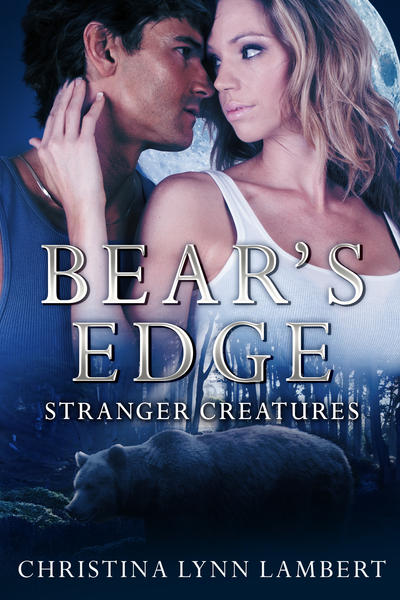 Bear's Edge is Book 2 in my Stranger Creatures series. Each book in the steamy, suspenseful, paranormal romance series features a different couple on their journey to happily-ever-after.

A boss can't date her employee—simple as that. No matter how much Shayla wants to unravel a few of Grant's mysteries and take her friendship with the shy, sarcastic man to the next level, she's determined to keep her fantasies of him to herself.

After bear shifter Grant lost his girlfriend and three best friends in a fire, he did his best to shut himself off from everyone around him. Falling for Shayla wasn't part of his plan, but after a kiss that leaves them both speechless and hungry for more, Grant can't keep his desire for his boss under wraps any longer.

When things between the two of them get hotter than he could have imagined, Grant wonders if some of his darker desires will be too much for Shayla or will she embrace the needs he’s kept hidden for so long?
An obnoxious reporter and Shayla's bitter ex have teamed up to chase down conspiracy theories that could destroy Shayla's business and worse, put her life in danger. To find their happily ever after, Shayla and Grant will have to trust in each other and find a way to crush all the obstacles standing in their way.

Grant the mystery man—a delicious mystery Shayla would like to unravel, piece by piece, layer by layer. Ah, but I can’t. I’m his boss. In a different lifetime, if we didn’t have the whole boss-employee obstacle going on…. No harm in looking, though, just a little, since he sat so close. She promised herself to keep her thoughts G-rated—okay, maybe PG-13. Grant had a talent with numbers and paid attention to detail. Also, he was a little shy and standoffish to a lot of people when it came to anything other than work. Shayla wondered where he sometimes went in his head, because, every now and then, his smile slipped from his face, just for a second, before being replaced with one a little harder. None of my business, she reminded herself.

She had really wanted to hug him this morning after seeing him so frustrated but decided it might be wiser and more appropriate to show him there were a few people on his side. Seeing him break things and try to be all strong and humorous about it made Shayla want to unravel the Grant mystery even more. It kind of hurt to watch him pretending to be fine, but all she could offer him was lunch and good conversation. Hopefully, Mr. Strong and Silent—Sydney called him that sometimes, although never to his face—knew Shayla and Sydney cared. And Shayla did care. Because he’s a friend. Just a friend.

Grant raised his soda in a toast. “To things not being worse,” he announced with a rueful half smile. “And, uh”—he cleared his throat—“to good company.” He nodded at Sydney, and when he met Shayla’s gaze, he held it. In his dark eyes, she saw hunger, wide-open desire, and about a million other things she couldn’t puzzle out. Grant looked at her that way sometimes, and she did her best to ignore it. He might have a small crush on her, or he could have a thing for petite, small-breasted girls possessing a great fashion sense.

Sydney broke the silence. “To good food and even better friends.” She clinked Grant’s glass, and Shayla came back to reality and smiled, pretending she wasn’t experiencing several different kinds of inappropriate thoughts and feelings for a sexy, complicated man who was her employee and also her friend. She needed to behave and remember things could never go any further than a panty-melting gaze.

Aiden “AJ” Shephard from Bear’s Edge gets his own story! I've been working on book 1 of the Haven Forest paranormal romance series which will be a subseries of my Stranger Creatures books.
AJ's mistake during a Shifter Army Enforcement rescue mission cost Ellie's brother his life. Ellie wants to hate AJ but a chance encounter in a rowdy bar reveals he's not the cold, heartless man she thought him to be.

Accepting a job at AJ's new shifter resort means the promise of a fabulous new career for Ellie. If only she could forget about blazing hot kiss they shared. Will Ellie’s growing attraction to him become more than just a temporary complication? AJ sure as hell hopes so. 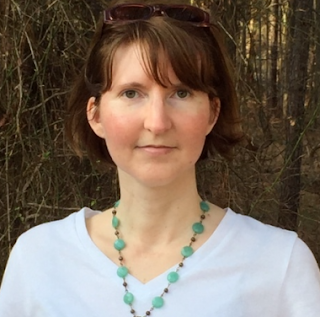 A few years ago, I read my first romance novel and I was hooked, so much so that I decided to give the idea of writing a story a chance. Love, courage, hope, and second chances are a few of my favorite themes. My stories include a fair amount of sarcasm, suspense, steam, and violence. When I’m not writing, I enjoy spending time outside and finding ways to avoid cooking. I live in beautiful Virginia with my husband, two daughters, and a sweet, hairy monster of a dog.

For updates (also occasional poems and weird memes) you can find me on social media at:

Welcome to Beyond Romance! My readers love shifter stories, so I hope they will check out yours!

Thanks for having me on your blog Lisabet!

Yup--I do love me some shifter romance. And bears are so extra-lovable, until they're backed into a corner, right? Grr!