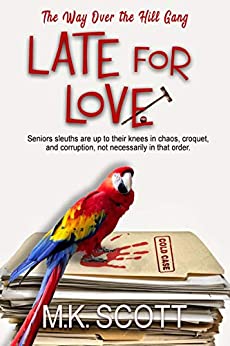 Late for Love (The Way Over the Hill Gang, Book 5) by M.K. Scott

When police detectives Marcy and Lance show up once again at the Greener Pastures Retirement Home, Jake and his fellow senior sleuths are more than eager to take on a new case. After all, aside from lasagna night and a cut-throat croquet tournament, there’s not much excitement at Greener Pastures. An investigative journalist has gone missing, with a pet parrot and a headless, water-logged, supposedly unidentifiable corpse the only clues. The police don’t have the resources to follow up the flimsy trail of evidence, so the senior sleuths step in to the breach.

However, loner Jake feels he’s the only one taking the case seriously. His air force buddies Gus and Herman are newlyweds, busy with their respective sweeties, Lola and Eunice. Sharp-tongued Eunice is probably the smartest of the bunch – she’s certainly the most bossy – but she’s currently consumed by her ambition to crush her opponents in croquet. The arrival of the mysterious and charming Hannah, who’s supposedly considering a move to the retirement facility, shakes things up a bit, especially when Jake finds her cover story about being an astronaut’s wife is a bald-faced lie. Could Hannah have been sent by powers who’d been threatened by the victim’s investigations?

Earlier this month I hosted M.K. Scott’s blog tour celebrating the release of Late for Love. Given that I’m well over the hill myself, I was delighted by the notion of a gang of senior citizen PIs. It takes a delicate touch to present a group of elderly individuals in a humorous but respectful way, and I was curious to see how well the authors (M.K. Scott is actually a husband/wife couple) succeeded in this regard.

Late for Love does a great job highlighting the challenges of aging, without being either sappy or silly. In particular, the authors focus on how younger people perceive the elderly. Jake and his companions are more physically than cognitively impaired and they are well aware how dismissive society can be of old geezers. In fact, they sometimes take advantage of these prejudices in their detective work; who, after all, would suspect a balding, hard-of-hearing grandpa of trying to ferret out information from a witness or break into a building?

At the same time, they sometimes struggle with technology (though Jake’s very competent in using his computer), and they face issues with limited mobility. Even when you’re a voluntary resident, it’s pretty tough to escape from Greener Pastures – without a car or a valid driver’s license the sleuths are often stuck.

As is often the case with cozy mysteries, the plot takes something of a back seat to the characters, but there are some clever touches (which I won’t share in order to avoid spoilers). The last quarter of the book, in particular, features a lot of unexpected action which I thought was very well portrayed. Hannah turns out to be well-qualified to join the senior sleuths. And although this isn’t explicit, the authors definitely drop hints that perhaps Jake won’t be a loner for long.

Overall, Late for Love fulfilled its promise: a light read that nevertheless touches on some real-world issues about getting older.

Darn it! My TBR list keeps getting longer, thanks mostly to your reviews! And you keep sending me in new directions. I've never read a cozy mystery. There's always a first time, right?