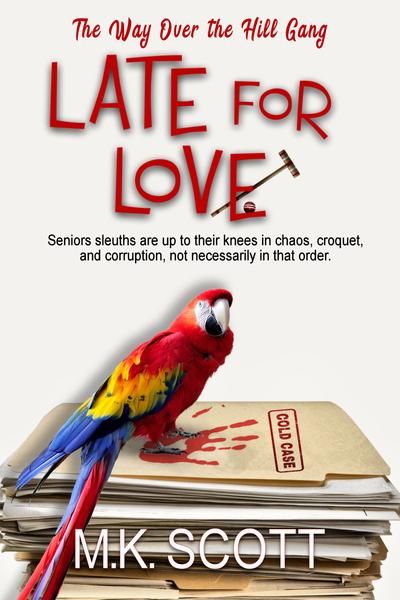 The senior sleuths love a good laugh, but this conundrum is no laughing matter. A missing journalist, an African Grey parrot, and a possible mob connection sound like the beginning of a bad joke. Unfortunately, there is no punchline and no one, aside from the seniors, who would dare to take the case on.

Will their first chance to handle a case on their own prove to be way too much for them to handle, and more importantly, could this first be their last?

A throat clearing drew their notice to Lance. Even though the detective was a few years younger than Marcy’s fifty, most people would never guess it with his thinning hair and pot belly. Still, his grin retained a touch of boyishness. “Leave it to you to cut to the chase.”

His eyes landed on Herman, and he then went on to make eye contact with all the sleuths. “I think you might be interested in what Marcy has to say.”

This sounded promising. “I’m listening,” Jake said, not making the mistake to answer for the others. He’d learned on previous occasions the error of assuming too much.

Lola and Eunice also agreed, while Gus held a hand up to his ear and asked, “What?” with an impish look.

Eunice elbowed him and didn’t bother repeating the question. It was always hard to tell if he hadn’t heard or was just jerking their chains.

Instead of replying, Marcy unzipped her backpack with a metallic zing, filling the silence that stretched between them. She removed some manila folders with typewritten labels and numbers. Jake’s shoulders went back, and his chin went up as he recognized the cold case files. His day just got better. It made him feel like he should salute and report for a mission.

The files made a shushing sound as Marcy shuffled them casually as a person would a deck of cards. “You’d be surprised at the dozens of cold cases we have. At first, I thought Lance was bringing me files to solve because he felt sorry for me.”

“Nope.” Lance grimaced. “The budget is limited, and there are no new hires in sight. Besides, anyone who gets hired will start out on active cases. There’s no manpower.” He cleared his throat when Marcy arched her eyebrows at the last word. “I mean people power to deal with the cold cases. We do what we can, but usually move from one active case to the next.”

“That’s why we’re here.” Marcy spread out the folders and used them as a fan. “Sure, I missed you guys, but I could use a little help, too. Anyone interested?”

There was a chorus of yeses with Herman raising his hand as if still in the classroom.

Eunice, even though she was the shortest, worked her way in front of Marcy and plucked a folder at random. “I’ll take this one.”

Even though they were used to the woman’s bossy ways, no one took it lying down.

Lola snatched the plump folder from Eunice and opened it. She blinked a couple of times to bring it into focus without any luck, and then retrieved her readers that hung on a chain around her neck. “Let’s see what we have here before you go volunteering us for a case that is older than we are.” 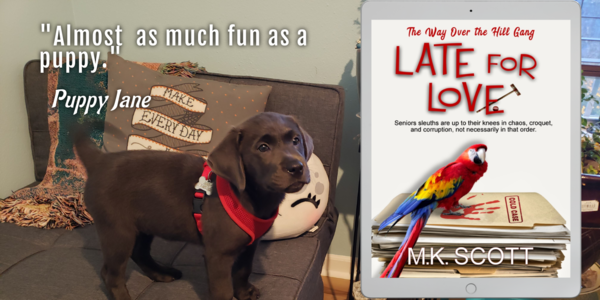 M. K. Scott is the husband and wife writing team behind The Painted Lady Inn Mysteries and The Talking Dog Detective Agency. Morgan K Wyatt is the general wordsmith, while her husband, Scott, is the grammar hammer and physics specialist. He uses his engineering skills to explain how fast a body falls when pushed over a cliff and various other felonious activities. The Internet and experts in the field provide forensic information, while the recipes and B and B details require a more hands-on approach. Morgan’s daughter, who manages a hotel, provides guest horror stories to fuel the plot lines. The couple’s dog, Chance, is the inspiration behind Jasper, Donna’s dog. Overall, both are fun series to create and read.

The book will be on sale for 99 cents on the day of the tour.

M. K. Scott will be awarding a $40 Amazon or B/N GC to a randomly drawn winner via rafflecopter during the tour.

This sounds like so much fun! I am looking forward to reading it.

Thanks for hosting Late for Love.

Sounds intriguing. I like the idea of older folks doing things more interesting than playing golf!