Review Tuesday moved to Thursday: Worth the Wait by Fiona McGier 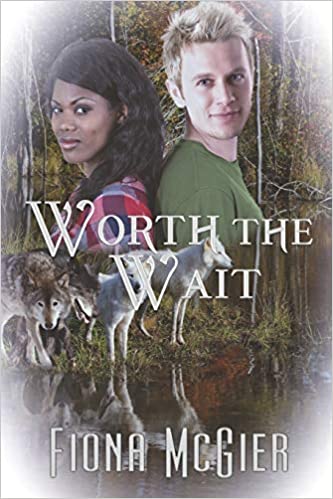 Worth the Wait by Fiona McGier

Deep in the Maine woods, not far from the Canadian border, there’s a boarding school for special kids. Northwest Maine Academy offers an idyllic setting in the midst of nature, a rigorous program of study, and a safe environment to help young people weather the storms of puberty – especially difficult if, like many of the Academy’s students, you happen to be a werewolf!

Worth the Wait takes readers back to the setting of When a Wolf Howls, the first book in Fiona McGier’s highly original shifter series. The first book chronicles the love affair between feisty human scientist Saoirse McColl and Latin dream Diego Vargas, the werewolf principal of the Academy. This second book, which one might label an ensemble romance, follows several of the secondary characters from When a Wolf Howls as they struggle to find their own happily ever afters.

Grant is a book-loving beta from a Canadian family of weres who sometimes hunt on the Academy property. He volunteers to take a top security position at the school in order to search out the beautiful black wolf he’d met on a previous visit. Both his human and his wolf selves are certain she’s their mate. When she turns out to be Monique, the widow of a pack leader who’s trying to raise three kids on her own, he’s delighted at the notion of a ready-made family. Monique, however, still grieves for her former partner, killed defending his alpha position, and resists the notion of a new love.

John is a scion of the powerful were family who founded the Academy and a critical member of the security team. He’s also gay, which has isolated him from his father and the other aggressively heterosexual wolves. When he meets Saoirse’s childhood best friend Freddie at her wedding to Diego, the attraction is instant and mutual. How can he explain to the sexy party boy that he shares his body with a wild animal – and that wolves don’t play around but mate for life?

Nathan longs for the companionship, love and sensual gratification that comes with being mated, but he hasn’t found the right woman – or the right wolf. Then one night, running in wolf form, he encounters a dark, slender female wolf prowling the perimeter of the Academy. He allows her to enter and they enjoy a night of ecstatic physical connection, exhausting themselves in wild passion. When they wake, though, back in their human forms, the woman claims to remember nothing and attributes the voice in her head to schizophrenia.

I enjoyed every page of this book. The author has created a fascinating, surprisingly consistent world in which being a werewolf is a genetic accident that can introduce incredible complexities into one’s life. Sharing one’s body with a wild creature isn’t easy, but Ms. McGier does a great job making us believe that the benefits may well be worth the pain. I particularly loved Nathan’s and Nisha’s story, which had a real ring of truth. Another high point was the relationship between Grant and Monique’s teen-aged son James. James has all the problems of any teen – shyness, geekiness, a tendency to be overweight – but on top of that he’s terrified wondering whether he’ll turn out to be were or not.

I don’t read a lot of romance, mostly because I find it predictable and stereotyped. I’m starting to understand that this won’t be problem with a Fiona McGier romance. She throws the tropes out the window, then sets her characters free to find their true loves. Of course I know the ending will be happy, but the path to that conclusion may include all sorts of unexpected twists.

Wow! You liked it, you really liked it! Seriously, coming from you, this is high praise indeed, since I've enjoyed so many of your books. Thanks for such heartfelt praise. I'm humbled.