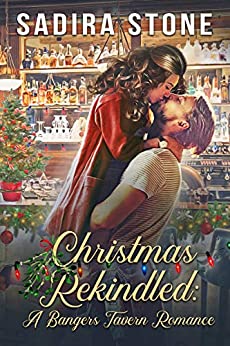 Charlotte “Charlie” Khoury has come home to Tacoma, but it’s purely temporary. Her father, stuck in a cast after a work accident, needs her help. Although her relationship with her dad is far from easy and she’d rather be spending the holidays on the slopes with her Portland friends, family comes first. A server job at her old haunt Bangers Tavern is just what she needs to make some extra cash and get away from Jack Khoury’s nagging.

For Bangers bartender River Lundquist, the lively pub is an escape – from his meddling high-society parents and from his grief. It has been a year, but he’s still traumatized by the sudden death of his fiancée the previous Christmas. The traditional festivities in his up-market Seattle community only rekindle the pain of Marla’s loss. The tavern’s funky atmosphere, colorful clientele and motherly proprietor may be the best therapy he could find.

After some initial hostility, Charlie and River become friends, then lovers. They’re both emotionally fragile, however, and unwilling to trust the future. After all, Charlie wants to return to her real life in Portland, while River’s family is pressuring him to move on and date new women. The deck seems stacked against them, until a threat to the tavern’s existence helps them to understand what really matters.

If you’d told me a month ago that I’d shell out four dollars for a holiday romance, I would have snickered. However, after reading several excerpts from Sadira Stone’s novel on her blog, I was so impressed by the quality of writing that I bit the bullet and bought myself a copy.

Overall, I’m glad I did. Charlie’s a great character, simultaneously snarky and insecure. She’s in her thirties, no youngster, and acts her age. River was a bit more difficult for me to believe. Though he mourns Marla, he hardly seems to think about her in any concrete way. In particular, he never seems to compare her with Charlie, or to feel guilty for his strong attraction to the feisty Lebanese-American woman. However, it was the emotional intensity of their connection sucked me in. The love scenes in this novel are positively luminous, without being stereotyped or sappy – nuanced and carefully observed but never clinical.

I always enjoy stories set in distinctive locales. Christmas Rekindled is full of local color. I’ve never been to Tacoma, but this novel brings it to life. I gather that Bangers Tavern was based on an actual place from Ms. Stone’s past. Certainly the pub, its staff and its denizens felt very real. I loved the detailed descriptions of the different promotions and events they stage to bring in customers. I definitely plan to steal the idea of the ugly Christmas sweater contest!

I found the latter half of the book a bit too complicated, with too many simultaneous conflicts. Finally, of course, the tavern is saved, by a deus ex machina who’s been hanging around the whole time. That’s a good thing, because I gather Ms. Stone plans other tales set in the world of this pub. (Indeed, the many secondary characters provide a rich source of possible stories.) And I might consider dropping by Bangers for another round.

As always, another well-thought-out review. Darn you! I may have to pick up a copy also. Thanks for checking books out for me. LOL!