A Real Place for a Story - #HistoricalRomance #CivilWar #Nursing 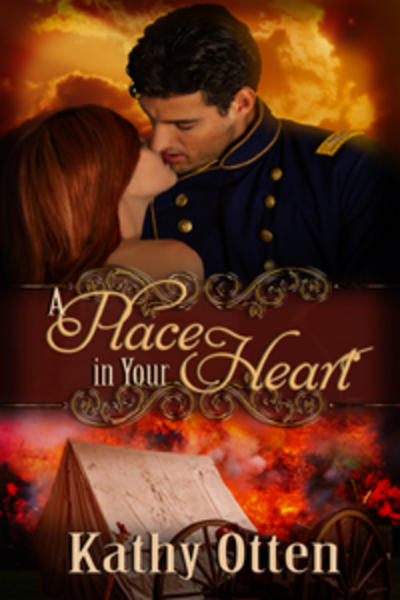 My new novel, A Place In Your Heart, takes place mostly at Armory Square Hospital in Washington, DC. In doing research for the day to day organization of a hospital at that time, I relied heavily on the book, Diary of a Civil War Nurse by Amanda Akin, who had been a nurse at Armory Square.

Before the war began, Washington was a relatively rural town with limited medical accommodations. There were no military hospitals and very few medical facilities.

By the end of the war there were over 56 hospitals in and around the Capitol.

The military soon realized that the current facilities were inadequate and public buildings were turned into hospitals. One wing of the Patent Office became the Patent Office Hospital. Patients were cared for within the walls of the Capitol. Reynolds Barracks Hospital was set up on what is now the south lawn of the White House.

Other buildings used as hospitals included Georgetown College, Water’s Warehouse, and St. Elizabeth’s Insane Asylum. Hotels and private schools were taken over for a monthly fee.

Soldiers were kept in field hospitals and when the regimental tents filled up, nearby homes were commandeered. Sick and wounded were only sent to the Washington hospitals after their conditions had worsened to the point of barely being able to survive the trip.

Because of the informal set up of these Washington hospitals, security and privacy for the sick were non-existent. People wandered in and out, looking for wounded friends and family. Pastors came into pray and convert the wounded. Patients became the victims of theft.

Mothers, wives and sisters were allowed to care for their loved ones. But they tended to ignore soldiers in adjacent beds or would only help those wounded from a particular state, and would scoff at Confederate wounded.

These hospitals averaged about 500 beds. Sanitation and ventilation were poor. The hospitals were not heated well. There was no sterilization of instruments and used bandages littered the floors.

As a result, blood poisoning, tetanus and gangrene were common. Mosquitoes and flies abounded spreading malaria and other diseases.

Wounded soldiers were fed the same food as soldiers in the field. Cornmeal and hard tack, fried in pork grease. Fruits and vegetables were never fresh and seldom available. Scurvy and malnutrition was rampant.

In June of 1861 the U.S. Sanitary Commission was organized. Their purpose was to give advice based on the most current medical knowledge of the day. Its goal was efficient, decent health care for the sick and wounded. The Commission directors were men of high professional standards and had the political means to apply pressure when needed. The Sanitary Commission became the driving force of Civil War Hospitals.

Armory Square Hospital, where most of my story takes place was one of six model hospitals built in 1862 according to the specifications of the Sanitary Commission. It was located on 7th St. across from the grounds of the Smithsonian, just beyond the canal, which itself was little more than an open sewer at that time, with floating dead cats and reeking with fetid odors. 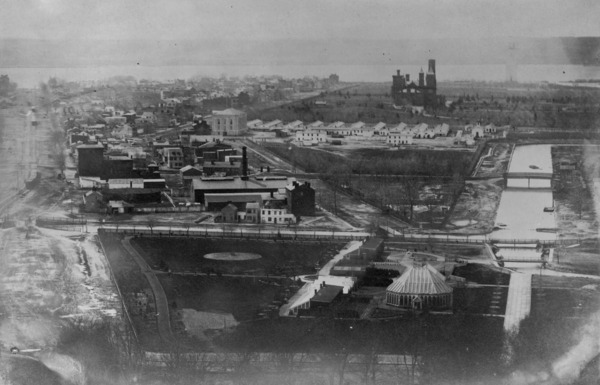 The hospital consisted of eleven long pavilion style buildings placed side by side with their gables facing the front and rear of the grounds.

There was a main pavilion which functioned as an administration building. It contained a reception room and offices for the surgeon in charge, a man named Doctor D. Willard Bliss.

Also inside was a dispensary, a linen room, post office, and officers quarters, (where my hero, Dr. Charles Ellard had a room).

A general kitchen, laundry and mess hall occupied the rear portion of the building.

The remaining 10 pavilions were positioned 5 on each side of the administration building. Each ward was 149x25 ft. with an average height of about 13ft. and held about 50 beds.

Covered walkways connected the wards rather than closed corridors designed to improve ventilation in the sick rooms.

A side door opened about half way down near a cabinet with a table and chair in front of it.

Each ward held about 50 beds. A section at the rear served as a dining room (grub room) and lodging for female nurses. There was an area partitioned off (the wall didn’t go all the way the ceiling), and it closed with a curtain. At the end of the ward were the bathroom, water-closet, knapsack room and the ward master’s room. 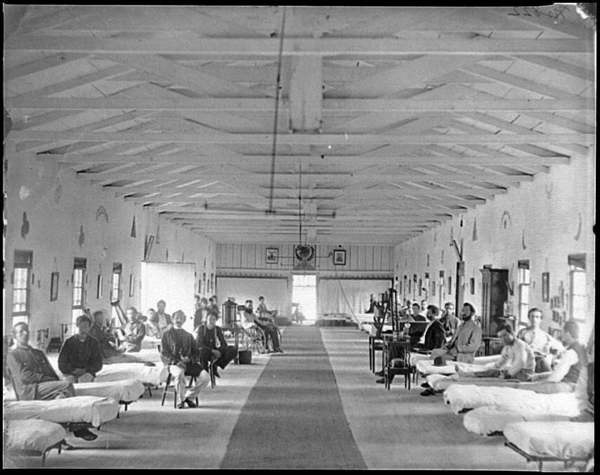 Patients in the ward

In the summer of 1863 the hospital received a $300.00 donation and new quarters were built for the lady nurses.

Ward E is the ward where Amanda Akin worked as well as my heroine Gracie McBride.

At Armory Square Doctor D. Bliss was the surgeon in charge of all the wards. Each ward had a surgeon, who had an orderly. At times a surgeon and his orderly might handle two wards. Each ward had a nurse who also had an orderly. There was a ward master and a cadet surgeon to dress wounds. Three attendants to each ward and 2 night watchers. Nurses were generally men, soldiers assigned the duty, who at the time of my story, were being sent back to the regimental field hospitals as more and more women volunteered.

During the summer months when the casualties were highest, tents were set up on the hospital grounds to handle the over flow of wounded.

Armory Square was known for receiving the worst cases from the battlefields of VA. It was situated nearest the steamboat landing at the foot of Seventh St. and was nearest the line of the Washington and Alexandria railroad. They were the first stop for wounded who wouldn’t survive the trip to any other hospital and they also received the soldiers who died enroute. As a result Armory Square had the highest number of deaths of any Washington military hospital.

Gracie McBride isn’t looking for love; she’s looking for respect. But in this man’s world of Civil War medicine, Gracie is expected to maintain her place changing beds and writing letters. Her biggest nemesis is the ward surgeon, Doctor Charles Ellard, who seems determined to woo her with arrogant kisses and terrible jokes.

Charles is an excellent surgeon. He assumed he would be well received by an army at war. He was not. Friendless and alone, he struggles to hide the panic attacks that plague him while the only person who understands him is a feisty Irish nurse clearly resolved to keep him at a distance.

But, Charles is sent to the battlefield, and Gracie is left with a wounded soldier, a box of toys, and a mystery which can only be solved by the one man she wishes could love her, both as a woman and a nurse.

“No. I want you to go home before the death of that ten-year-old boy becomes so ordinary that one day you wake up and realize you no longer have the ability to feel.”

She squared her shoulders and stepped toward him. “Me own husband was a doctor, sir. I’ve birthed babies and stitched wounds. I stood by William’s side during surgeries and passed him instruments. I helped him clean the intestines of a man gored by a bull, before putting it all back inside that man’s belly. Me delicate sensibilities did not send me into a swoon then nor will they here. I thank ye for yer concern, Doctor Ellard, but ’tis who I am. And by the saints, as long as I have breath in me body, I will feel, and I will care.”

Their gazes locked in that moment and something flickered in his icy depths, overshadowing his usual cynicism with what she suspected might be admiration. The harsh lines of his face softened.

“Saint Jude must indeed be watching over you, Mrs. McBride.”

“That he is, Doctor Ellard, that he is.”

He gave her a brisk nod and opened the door. “You’re not going home then, are you?”

She turned. “Ye know us Irish, Doctor Ellard. We don’t know what we want, but we’ll fight to the death to get it.”

A Place In Your Heart is available at Amazon

Kathy Otten is the published author of multiple historical romance novels, novellas, and short stories. She is also published in contemporary romance and historical fiction. She is a Northwest Houston RWA Lone Star winner and Utah/Salt Lake RWA Hearts of the West finalist. A Place In Your Heart is her fourth full-length novel. Currently, she is putting the finishing touches on a contemporary young adult novel.

She teaches fiction writing online and at a local adult education center, and is a regular presenter at area events. Kathy also does manuscript assessments and editing. She lives in the rolling farmland of western New York where she can often be found walking her dog through the woods and fields. She has been married for thirty-four years and is the mother of three grown children and one grandson.

Kathy can be contacted at kathy@kathyotten.com

Thanks, Lisabet, for having me here today. It was fun sharing a bit of the research I did for this new release. Best Wishes. :)

I knew very little about hospitals during this time period, mostly the inadequate sanitation. Thanks for sharing.

Thanks for stopping by. Glad you enjoyed the post. :)

Armory Square was the primary focus of my research and as it was designed by the Sanitary Commission it was state of the art for the time. There were only six of these hospitals. The other 50 hospitals suffered a greater struggle with foul air and inadequate sanitation. Thanks for stopping by. :)

What an interesting post! Thanks for sharing your research and good luck with the book.

Somehow I didn't manage to come by yesterday to welcome you, Kathy. As I told you privately, this is a fascinating post. Meanwhile Gracie's voice comes through loud and clear, even in this brief excerpt.

Kathy, sounds like a great story. There was a series on PBS called Mercy Street that was set in a Union hospital and showed much of what you described.