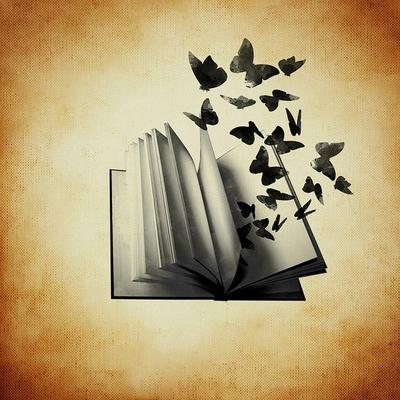 "The paper burns, but the words fly free."

We are all destined for dust. Not exactly a pleasant thought to be contemplating on this rainy Wednesday afternoon, but mortality is a truth that no one can dispute. Sooner or later, we will vanish from the earth. Life will go on without us, presumably; we will, most likely, not be in a position to know.

Of course, death is fundamentally a mystery. Perhaps we simply cease to exist. Perhaps we are reincarnated as someone else - with or without memory of our former lives. Perhaps we're shuffled off to some eternally blissful paradise or agonizing realm of punishment (although I personally view these alternatives as unlikely). Maybe the material world is nothing but a dream that will dissolve when we cross the threshold of death. At that moment we'll understand that we are beings of pure spirit, joined into one Being.

Since the truth is unknowable, mostly when I think about dying I consider what I'll leave behind. No children. None of the great scientific discoveries I expected to produce when I was in my teens. Certainly no riches! No, all I can hope for is a small circle of friends and family who may mourn my passing and remember me fondly. And of course, my writing, which even in this ephemeral digital era may still survive.

I feel a bit sheepish, considering the sum of my oeuvre as some kind of legacy. A dozen smutty novels, a hundred or so naughty stories, a couple of notebooks full of poems: is that really all I'll bequeath to the world at large? I don't harbor any illusions that I'm a Great Author, that my writing has some sort of serious significance or speaks to the Human Condition. At the same time, I do mention my writing in my will. When I die, it will all belong to my brother, who's also a creative type though in a different realm of the arts.

When I sat down to pen this post about famous last words, of course I went to Google first. I found a page with hundreds of quotes (http://www.mapping.com/words.shtml): clever, humorous, ironic, inspiring. The one above struck me as particularly relevant to anyone who is a writer.

Rabbi Akiva was a Jewish scholar and martyr, executed by the Romans for his faith (and according to some accounts, for supporting a Messianic rebellion). He was talking about the Torah and the Talmud, written works of great spiritual and historical meaning.

I realized, though, that all words have a spiritual dimension. They are more than marks on paper (or bits on a hard drive). Words create realities. Even my sex-drenched novels have that power. Their ability to alter the world transcends their physical form.

Think about your favorite authors, the ones whose reading changed you forever. They may be long gone, crumbled to dust, but their words endure. I'd like to think that when I die, my words, too, will fly free, ready to alight on a reader's shoulder and spark her imagination.

I doubt that I'll manage to be as witty as many famous individuals at the moment of my death. However, I wouldn't mind borrowing my last words from Errol Flynn (1909-1959):

"I've had a hell of a lot of fun and I've enjoyed every minute of it."

When I'm gone, I hope that my readers continue to have fun. I could hardly ask for more.

My wife has already decided on the music she wants played at her funeral: "Staying Alive."

I can see your wife shares your sense of humor!