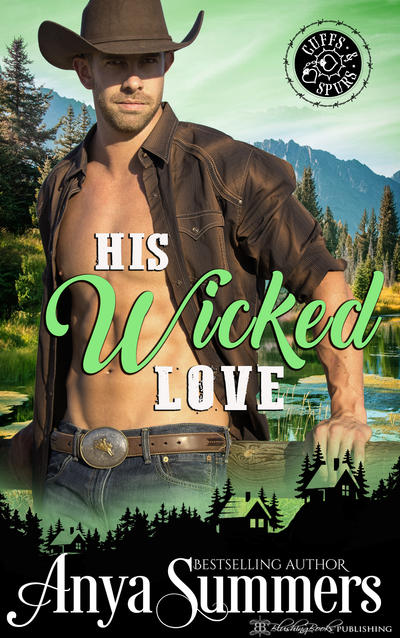 Mason Stewart is in a pickle. He and his brother are the co-owners of the Black Elkhorn Lodge and Resort. Their dream stands at the precipice of utter ruin because their previous chef embezzled every last dime of savings they had for the lodge. In a last ditch effort to save his business from the brink of annihilation, Mason hires a new chef for their restaurant; sight unseen.

Nothing can prepare him for Emily, the red-haired siren who waltzes into his resort, carting a set of chef knives and demanding to see her new kitchen. She challenges his authority. She inflames his every wicked desire. She is everything he has ever wanted. And he can’t touch her. He’s her boss. And it would be wrong to give in to the incendiary heat between them… wouldn’t it?

“If you want to lug a heavy suitcase, be my guest, sweetheart. I think we need a demonstration, a sample of your skills, before we go any further. Don’t you?” Mason challenged, letting his annoyance creep into his voice. She’d accepted the position without the clause of needing to see the kitchen first. So she thought she could toss in an extra demand, put a wrench in his plans to bring the lodge back from the brink, test who was in charge? It wasn’t her. Miss Fox could try but she would fail. This was his place and he would fight like a rabid dog to save it, to protect it further from outside harm. He wouldn’t ever allow the lodge or himself to be overrun by a pretty face.

She smiled. The air was charged between them, electrified, as she stared him down, then said, “Cowboy, once you’ve had my cooking, you will be my slave and beg me to stay.”

She rolled her eyes in an exasperated fashion and asked, “Then why did you call me?”

“That’s what I’m beginning to wonder,” Mason retorted, not admitting that he wanted a chef at the top of their game. That he believed if they offered culinary delights not found at other resorts or restaurants, they would attract customers, and maintaining the current menu that was a crowd favorite was paramount.

She was their Hail Mary Pass, even though she didn’t know it. Nor would he tell her that. She already had an overabundance of confidence.

Cole intervened, severing the electric livewire connection as he stepped between them. Mason finally inhaled a deep breath while Cole gave him a brief glance with his brows raised high enough they nearly disappeared beneath his Stetson, and a ‘what the hell?’ expression. Then Cole shifted fully toward Miss Fox, his face calm with the pleasant smile he typically used to win over a sub, and said, “Emily, why don’t I take you over to the restaurant and you can see if it’s to your liking? We updated the kitchen two years ago and have all the latest equipment. Not that I have any idea what all those gadgets do.”

It was the gamine grin, the spread of her pale pink lips exposing her straight, white teeth, and transforming her face into breathtaking. And it was directed at his brother. It shoved Mason toward caveman status. He wanted to snarl at Cole to back off, not to touch her, that she was his. Which was fucking asinine, and only fueled his internal engines to near record levels.

“That would be fabulous. Thank you. Is he always like this?” she asked Cole, indicating Mason with a jaunty tilt of her head. Her hair shifted, making it shimmer.

A half grin spread over Cole’s face and he replied, “No. Sometimes he’s worse.”

Emily’s full-bodied, sexy laugh sucker-punched Mason in the sternum. The sound skittered along his spine and pooled in his groin. The throaty, jazz singer sound made him wonder what she sounded like when she came. It made him yearn to discover whether she was a screamer or issued almost silent, throaty moans. There was a part of him that wanted to bend her over his desk and fuck her until his legs buckled.

“Good to know,” Emily responded with another shake of her head which made the waterfall of red tresses shift and move like flames. The color was so vibrant, Mason ached to feel the strands in his hands. Would they be as soft as he imagined, or would they singe his flesh?

“It is; better to be armed and prepared. If you’ll follow me,” Cole murmured, diffusing the situation and ignoring Mason.

“Honey, I’d follow you anywhere,” Emily flirted. With his brother. Jealousy gripped Mason, which was idiotic at best. He couldn’t want Emily. Wouldn’t allow himself to desire her. One, she was his employee and there were some roads that were better left untraveled. Two, he wasn’t sure he liked her. She was brash and mouthy, and most likely as vanilla as they came.

But that didn’t seem to matter to his dick, who liked the thought of playing boss and naughty secretary with her a little too much.

Except then Cole picked up the ball Emily had lobbed his way and responded, “Likewise, sweetheart. Mason, you coming?”

And from a damn fantasy. He shook his head, attempting to distill the lust raging through his veins. He bit out, “I’ll be right behind you two.”

Anya is a bestselling and award-winning author published in multiple fiction genres. She also writes urban fantasy and paranormal romance under the name Maggie Mae Gallagher http://www.maggiemaegallagher.com/. A total geek at her core, when she is not writing, she adores attending the latest comic con or spending time with her family. She currently lives in the Midwest with her two furry felines.

To Master and Defend, Book 2 https://www.amazon.com/Master-Defend-Dungeon-Fantasy-Club-ebook/dp/B01FNG23HI/

Anya will be awarding a $15 Amazon or B/N GC to a randomly drawn winner via rafflecopter during the tour.

Welcome back to Beyond Romance, Anya. This sounds like a fun story! I love a heroine with attitude.

I really enjoy her books!

Thanks for having me back!