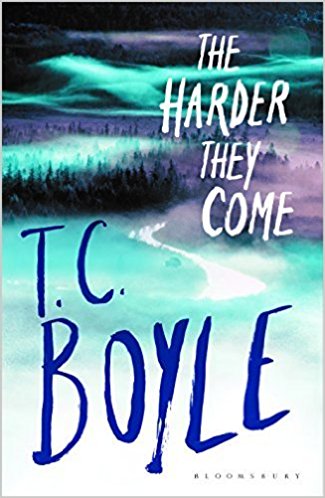 The Harder They Come by T. C. Boyle

Retired high school principal and ex-Marine Sten Stenson is vacationing in Costa Rica with his wife Coralee when their tour bus is hijacked by a trio of thugs. As the native gang threatens the group of senior citizens with knives and a gun, Sten’s military training takes over. On automatic, he grabs one of their attackers by the throat to immobilize him, ultimately choking the other man to death. To his fellow cruise passengers, Sten’s a hero, but all sorts of unpleasantness follows as he is forced to deal with the authorities and make moral compromises.

Sara Hovarty Jennings is a sovereign citizen. A forty-something divorcee who struggles with her weight, she works hard at her job as a farrier, takes meticulous care of her own personal property, loves her shaggy dog Kutya, and just wants to be left alone. She doesn’t pay taxes. She won’t register or insure her car just because the government says she must. She sure as hell isn’t going to wear a seat belt just because some law requires it. One evening she’s stopped by the police on California Route 20. She refuses to get out of the car as the officer demands. She ends up in jail overnight, with her car impounded and Kutya in quarantine because he hasn’t been vaccinated for rabies as the law demands.

Adam Stenson, Sten’s son, has always been a problem child. Now in his twenties, he’s living in a cabin in the northern California forest, drinking grain alcohol, growing drugs and becoming progressively less connected with reality. He identifies with, and takes the name of, the legendary mountain man John Colter. He’s determined to be as tough and crafty as his hero, to fight against the “aliens” who want to control him, to live free in the wilderness no matter what the cost.

When Sara encounters Adam, she persuades him to help her free her dog from the pound. They become lovers. Though Adam is peculiar, emotionally volatile, maybe dangerous, a bond develops between them. Everything unravels, though, when Adam, in the throes of his Colter-inspired hallucinations, shoots and kills two local men.

T.C. Boyle’s brilliant novel The Harder They Come revolves around these three rather extreme characters. Their beliefs and their actions should make them seem repugnant, or at least very foreign to someone like me, who espouses rather liberal political views. It is a measure of Boyle’s genius that he managed to make me feel sympathy for and warmth toward all three of theme, even the homicidal lunatic Adam.

In the real world I might label these people as right wing kooks. Boyle conveys their emotions with such conviction and their philosophies with such apparent logic that I found myself actually agreeing with them, at least to some extent. I admired Sara’s independence and courage. I felt Sten’s frustration with his aging body and his helpless despair in the face of his son’s psychological impairment, and understood how these feelings could engender deadly anger. I even could understand why Adam felt as he did, why he was so inspired by Colter, in a world where true agency is so difficult to achieve.

It took me a long time to finish The Harder They Come—more than a month, though of course I was reading quite a few other books concurrently. I found that I didn’t want to consume more than one or two chapters at a sitting, not because the book didn’t pull me in, but because I felt I needed a break to digest and to appreciate what I’d just read.

Boyle’s prose is so compact, so evocative, so precisely targeted, that one cannot help but marvel. He’s an expert at conveying the natural world as well as human emotions and behavior. The Harder They Come is set well north of San Francisco, near Mendocino and Fort Bragg, among the redwoods and the rednecks. The area used to be a thriving center of the logging industry, but that prosperity is long gone. Now Mexican gangs grow pot deep in the woods, the old rail line is used for tourist jaunts, the locals struggle, and everyone wonders what the future will bring.

The book beautifully conveys the natural beauty of the area, the wildness that still exists. It also evokes the quiet desperation of the people who inhabit the region, a desperation that expresses itself in prejudice and violence. Boyle focuses on Sten, Sara and Adam, makes them real, living, breathing human beings, but he’s also clear that they’re products of their time and environment. The Harder They Come could be viewed as a microcosm of contemporary American society, a cautionary tale on the consequences of extremism.

But Boyle isn’t on a soap box. He never is. He’s just painting pictures, encouraging us to draw our own conclusions. That’s why I feel that this novel is important. It goes beyond the stereotypes, probes more deeply into how these people—“these people” whom in another context I might be tempted to label as the enemy, as alien to me as the guys Adam murders—reason, think and feel. And my conclusion is that ultimately, we’re not that different after all.

You make this sound very interesting, though challenging. It, and your personal comments, remind me of a writer friend of mine, sci fi author Rob Sawyer. He sometimes writes characters whose beliefs are the opposite of his own -- but he deliberately finds what is valuable in their beliefs and makes sympathetic or even heroic.

These days we tend to be exposed mostly to people who agree with us. That's a danger, I think. We need to understand the forces that shape individuals with profoundly different beliefs.