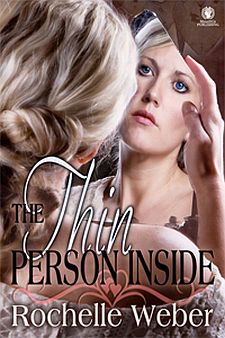 Today I want to introduce you to Kristen Jensen, the heroine of my romance The Thin Person Inside. I've got an excerpt from the book after the interview, too.

Q: What’s your story/back story? Why would someone come up with a story about YOU?

KRISTEN: I guess the reason people would want to interview me is because of the unique way I met Sean Wesley. His manager pulled strings to get him into treatment at the Danville, Illinois, VA because he was having trouble staying clean after he ODed during a recording session. I was there to address my food addiction. I weighed three-hundred pounds when we met. Who would ever expect a rock star like Sean to fall for someone that fat?

Q: Can you tell us about your hero?

KRISTEN: Sean is tall, and drop-dead handsome with black hair and incredible blue eyes. He’s one of the lead singers of The Haystack, and I was in love with his music long before I met him. He’s kind, and intelligent, and incredibly brave. Can you imagine a pianist making a comeback after losing a hand?

Q: What problems do you have to face and overcome in your life?

KRISTEN: Having been morbidly obese most of my adult life was a pretty big one, pun not intended.

Q: Do you expect your hero to help or is he the problem?

KRISTEN: Sean and I support each other. We have different addictions, so we’re not binge buddies. Although, he says he was a fat kid and he has to watch his food, so I guess I’m a good influence on him.

Q: Where do you live?

KRISTEN: My apartment’s in Rantoul, Illinois. It’s about 125 miles south of Chicago, ten miles north of Champaign, and forty-five miles northwest of Danville. I was raised in Chicago, but rents are less down here and I’m close to my daughters.

Q: During what time-period does your story take place?

KRISTEN: You would call our romance a contemporary one. It’s the 20-teens.

Q: How are you coping with the conflict in your life?

KRISTEN: Aside from having had a heart attack recently, I’m doing okay. I’ve lost about a hundred pounds so far and I’m still losing. I work out along with Sean when he does his physical therapy, and I’m healthier than I’ve been in over twenty years. My kids aren’t embarrassed to be seen with me anymore.

KRISTEN: Who doesn’t love bubble baths? For so long I didn’t fit in the tub. Half of me was out of the water, and even if I did sit down, I couldn’t get up. Now I really luxuriate! As for the rest—do I have to choose? Can’t I gaze at the mountains from the beach? Snuggle with both puppies and kittens? Eat chocolate-covered or flavored caramels (provided they’re gluten & sugar-free, of course).

KRISTEN: Neither. You slide all over the bed and spend the night chasing your pillows on satin and cotton’s too cold. In winter I like flannel, and in summer I like jersey.

KRISTEN: Parties can be fun, but quiet dinners are more romantic.

Q: I love pizza with (fill in the blank).

Q: I’m always ready for (fill in the blank).

KRISTEN: Trivia, karaoke, and family games like Apples to Apples.

Q: Those are all the questions we have for you. Thank you for speaking to us.

KRISTEN: You’re welcome. I really think Sean is much more interesting than I am. After all—he’s the rock star.

Rochelle Weber is a Navy veteran with a BA in Writing from Columbia College in Chicago. Her novels Rock Bound and Rock Crazy are available in both e-book and print. Her third book, The Thin Person Inside, is available at MuseItUp Publishing, Inc. Ms. Weber edits for The Author’s Secret, and publishes the Marketing for Romance Writers Newsletter, winner of the 2013 and 2015 Preditors & Editors Readers’ Polls for Best Writers’ Resource. She also mans Roses & Thorns Reviews.

Ms. Weber battles bi-polar disorder, quipping, “You haven’t lived until you’ve been the only woman on the locked ward at the VA.” Her song, “It’s Not My Fault,” won a gold medal in the National Veterans Creative Arts Competition. She lost over a hundred pounds and kept it off for over three years. She lives in Round Lake Beach, Illinois with two cats who have her very well-trained. 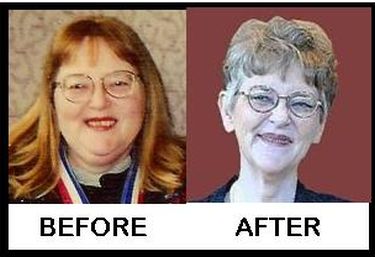 The Thin Person Inside
By Rochelle Weber

Kristen Jensen, a Navy veteran, tips the scale at a crippling three hundred pounds. In desperation she asks her VA therapist if she can go into addictions treatment with the guys where she meets Sean. With black hair, blue eyes, and a perfect body she figures the reason he’s speaking to her is that she’s the only other person in the room.

The Haystack told their lead singer, Sean Wesley, to get clean or get out. But none of the big-name clinics worked. Sean’s a Desert Storm vet, so they send him to a VA in the middle of nowhere. When he meets Kristen the first day, he thinks it’s tragic such a pretty girl’s trapped in a huge body. And her honesty, intelligence, and bravery are even more impressing. Sean’s drawn to Kristen, but she’s had decades to build layers of defense.

Sean Wesley went into the snack room to help himself to coffee and a roll. He’d probably gain weight while he was here without his personal trainer and weight room. He’d been a fat kid—always the last to be chosen for games, and stuck in right field when he did play. He’d been saved from a life of obesity by a growth spurt in his late teens, a judge who gave him a choice between jail and the Marines, and switching addictions from food to booze and then cocaine.

By rights, Sean shouldn’t be at a VA facility. Celebrities like him usually got sober at places like the Betty Ford clinic or Hazelden. Actually, he’d come from Betty Ford, but he’d still felt shaky so his manager, Don Nelson, had done his homework. Danville, Illinois, was in the middle of nowhere. The program was different, based on Rational Emotive Therapy, and Sean was a veteran. While he made too much money to be treated at the VA, there’s money and then there’s money. Sean had money—the kind that opens doors and breaks down barriers. The kind that makes even the Federal Government say, “We’ll see what we can do,” and then do it.

So here he was in the middle of a cornfield in bum-fuck Illinois at a shabby old VA hospital. An enormously obese woman came into the snack room interrupting his reverie, and Sean thought, That could’ve been me. What a shame—she’s so pretty.”

Kristen noticed the table of goodies and the drop-dead-gorgeous man perusing them in the break room when she went in there to put her lunch in the refrigerator.

“Want one? I heard they send ’em over every morning. I guess they’re yesterday’s leftovers.”

That’s right. Offer sweets to the fat lady. She managed a tight grimace. “Thanks, but I’m here because I’m a food addict.” She held up her orange.

“I’m Sean.” He prob’ly wouldn’t give a fat chick like me a second look anywhere else. Still, what is it about men with black hair and blue eyes that makes me go all mushy?

“I’ve heard of food addicts, but what makes ya call yourself that?”

“When my kids were little, I left them without a babysitter while I went to the store and wrote a rubber check for ice cream and M&Ms. I’d say I’ve been about as desperate for my fix as any addict or alcoholic.”

“Wow! Yeah, I guess so.” He held the door for her as they exited and then followed her into the Day Room.

Kristen sat on a love seat, taking up the whole thing, while Sean sat in the chair on the other side of the end table next to her. They were the only two people in there since there were classes going on. She was sure the minute other people came out he’d find someone else to talk to. She pulled out her crocheting. She was fairly certain Eric would propose to Viki at Christmas and had already begun work on a tablecloth for them. She worked on it a minute and then decided to be polite. “So, what’s your drug of choice?”

“I’ve heard that. I was at a halfway house fundraiser and they said it takes something like over a year for cocaine to completely leave the body, and during that time a person can still have random cravings. They were raising money for an extended treatment program.”

“That explains why I’ve been having such a hard time. I hope this treatment helps.”

People started coming into the Day Room from classrooms just down the hallways. Several of them gave Sean and Kristen curious looks. Yeah, what’s a great-looking guy doing sitting with a fat chick?

Thanks so much for having us here. I was sick all day, which is why I'm so late posting this. Happy Holidays.

I'm sorry for not being around to welcome you! I've been getting ready for a business trip and things have been really hectic.

Your post is thought provoking and inspiring. As you know, I have some understanding of what it's like to deal with a food addiction. I applaud your courage.