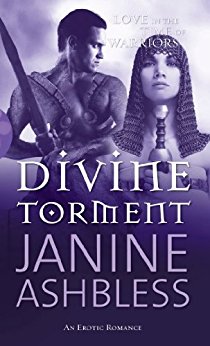 Many years ago, I reviewed Janine Ashbless’ Burning Bright, the sequel to Divine Torment. At the time, I commented that I was curious regarding the main characters’ history. In Burning Bright, we learn that both Myrna and Veraine had betrayed their peoples and their destinies for the sake of love, but little more. Thus I was delighted to receive an invitation to read the volume that details the adventure that brought Myrna and Veraine together.

In Divine Torment, the warrior Veraine, scion of a great general of the Irolian empire and a slave girl, is dispatched with his army to protect the vassal city Mulhanabin from the devastating attacks of a fierce Mongol-like horde of nomads. Mulhanabin, an ancient stone edifice at the edge of the desert, is the demesne of the Malia Shah, the Yamani goddess of destruction, pestilence and chaos.

The latest incarnation of the Malia Shah is a copper-haired, dark-skinned girl trained to disregard both pain and pleasure in her quest to escape from the cycles of rebirth. She becomes Veraine’s obsession from the moment he sees her, yet she appears to be serious and aloof, insulated from mortal concerns. Whether performing ceremonies of human sacrifice or enduring the disgusting worship of the eunuch head priest Rasa Belit, she remains unmoved. Yet she dreams of overwhelming passion in the arms of the Sun, experiencing in her visions the annihilation of individuality that is the essence of godhead.

Not much happens after Veraine arrives. The Horse-Eaters attack the temple-city and Veraine’s army, though desperately outnumbered, defeats them, assisted by an earthquake invoked by the Malia Shah. Rasa Belit attempts to murder Veraine and of course fails. Veraine witnesses the Malia Shah’s bloodthirsty rituals, yet his horror is not sufficient to kill his desire. Finally, the two fated lovers come together, in a marathon coupling that leaves them bruised and sore, yet completely unsated.

Only when they are discovered does it become clear that both of them have thrown away their present lives for the sake of their love. The goddess, caught in the blasphemous act of fucking a mortal, in interred in her room and left to die slowly. Rasa Belit prepares to carve up Veraine’s genitals, slice by tiny slice.

I will not reveal any more of the plot, although the existence of the sequel obviously means that both protagonists survive.

I have very mixed feeling about Divine Torment. The early chapters are bland and lack coherent structure. Random sex scenes occur to liven things up, but the plot seems to limp. The Malia Shah is more an absence than a character. Her primary attribute is her cultivated lack of emotion, which makes her seem other-worldly but hardly the figure to ignite such desire in an experienced cocksman like Veraine. Of course, they are destined soul-mates, so perhaps no justification is required. Nevertheless, I found it difficult to care about his obsession because it seemed arbitrary and implausible.

The last seventy five pages, on the other hand, pulse with passion and drama. When Veraine and the Malia Shah are torn apart, the full weight of their choice and its consequences crashes down upon the reader. The worst aspect of their individual punishments is their separation. This is high romance, well-executed, with the emotional intensity that I’d been waiting for through the earlier sections of the book.

In my review of Burning Bright, I praised Ms. Ashbless’ ability to vividly portray differing cultures and exotic locales. Divine Torment does not measure up in this regard. I never really developed a clear sense of the temple and its precincts. Although Mulhanabin lies in the desert, I never felt the dryness in my nostrils, suffered under the parching sun, saw the dust swirling in the narrow lanes of the city. The religion of Mulhanabin borrows heavily from the Hindu cult of Kali. It was audacious of the author to make her goddess frightful and cruel rather than beneficent, but the theology is hardly original.

And yet, when I go back and re-read selected passages of the novel, I find thoughtful, well-crafted prose. I don’t fully understand why my overall reaction is so luke-warm:

I feel the fly tickling across my thumb onto the back of my hand. The sensation is like a line of light drawn across a dark place; I can’t ignore it. The feeling is there. It is an insect, so I should be irritated and flick it away. But if it were not an insect, if that same sensation were a fingertip drawn across my skin by a man, would it be pleasure I felt instead of irritation? It depends on which man. The meaning is not in the feeling, it is in my response.
...
He is not the master of his flesh. He has not learned that significance is a habit of mind. I was taught long ago that it is not necessary to give meaning to sensation. Pain does not matter any more than pleasure. Lust is not more significant than an insect itch. The marks on the scroll do not have to be words. If you look at them, they are just marks.

But, she thought, the poem is beautiful.

I do not want it to be lost when the priests die.

I leaf through the book and find pages like this, quiet and glowing insights into the mind and heart of the girl-goddess. Perhaps it is because they are so quiet that they made so little impression, on my first reading. Perhaps it is because they are scattered, unpredictable, among the rough actions and unreflective decisions of the brave but somewhat boorish Veraine.

Perhaps if I reread the book from the start, I’d find more that I missed.

I probably should say something about the sex scenes in Divine Torment. What shall I say? The first such scene in the book, a frolic involving Veraine and two slave girls, screams “gratuitous sex”. It neither furthers the plot nor reveals character. Other scenes have more to redeem them. The second, a tale of sexual discovery and torment recounted by Veraine’s cultural attaché Rumayn, has the virtues of illuminating Yamani superstition and cruelty. There is a male-male scene, in which Veraine inflicts his frustrated lust upon his handsome and willing chariot driver, and a breathlessly intense coupling between Veraine and the Malia Shah that turns out to be a dream. There is a brothel scene, and a prison/bondage scene, and a wonderfully kinky and repulsive scene in which the high priest grovels at the goddess’ feet. If you are looking for sex, this book offers quite a bit, but in some cases it is not well integrated with the plot.

Finally, I am left with confused impressions: searing passion and mundane lust, unearthly wisdom and ordinary confusion, divine fate and mortal blindness. I think I must recommend that readers form their own opinions.