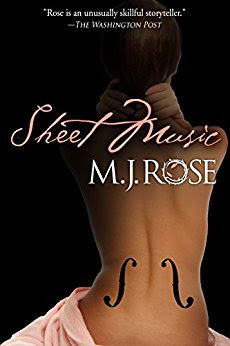 Justine Pagett is an unusually sensual woman. The warm, butter-and-sugar smells of fresh baking, the smokey blackberry taste of vintage cabernet, the breath-stealing sting of the wind on her cheeks as her sailboat skims the waves, the teasing sensation of brandy dribbling down across her naked breasts, Justine experiences all these sensations with fierce, almost frightening, intensity. Justine is a woman who orgasms standing in a doorway, listening to her lover play his cello half a room away.

Not only does she feel these things, she describes them with awesome clarity. She is a keen observer of her environment and her fellow humans, a professional journalist, a "wordsmith", as her father calls her at the age of ten.

The intriguingly complex protagonist of M.J. Rose's novel Sheet Music, Justine cannot help succumbing to the lure of her senses. She hardly tries to resist. She struggles valiantly, though, to decouple her senses from her emotions, to distance her body from her heart. She leaves lovers precisely at the moment when they become attached to her. She shuns her father and sister, blaming them for her mother's unhappiness and early death. She lives a cold, lonely, empty life in Paris, deliberately seeking out the ambiguous comfort of purely physical release, allowing herself true passion only in the realm of her career.

Sensation and emotion are intricately linked, however, and Justine cannot escape from either grief or love. Sights and smells constantly reanimate memories of her mother, a chef who initiated Justine into the sweet mysteries of the palate when Justine was still a child. And when a writing assignment brings her back into the life of cellist-composer Austen Bell, she rediscovers an irresistible emotional connection that goes far beyond their incandescent physical couplings.

Justine is a woman living a lie, or trying to, desperate to sever any emotional attachments for fear that she will fall prey to the weakness she saw in her mother: loving too much. She uses words as a weapon to push away the emotions clamoring for her attention, having discovered as a child that "the process of thinking about what word described my feeling took my mind off the feeling." For the three years since her mother's death from cancer, she has managed to maintain a facade of detachment, brutally suppressing the grief that periodically overwhelms her. As she begins research for a biography of the celebrated composer and conductor Sophie de Lyon, though, her mask begins to disintegrate.

Returning to New York from her self-sought exile in Paris, she is forced to deal with her family, living and dead. Meanwhile, she receives ominous threats warning her against writing about Sophie, and the presence of Austen Bell (Sophie's student and ex-son-in-law) wakens a yearning in her that she cannot ignore. Grief, anger, love and fear roil beneath her polished surface, finally reaching a crisis when Sophie mysteriously disappears.

The character of Sophie mirrors and illumines Justine's nature. Like Justine, Sophie is exquisitely sensual and voraciously sexual. The mansion she has made into her music academy, Euphonia, is a fantasy castle perched at the ocean's edge, the walls encrusted with seashells, the gardens a riot of color and scent, every detail personally chosen by its mistress. Sophie is beloved and notorious, a force of nature as much as a woman. Justine senses that there are secrets lurking behind Sophie's public personna. As she investigates, she is drawn into a maze of seduction, deception and danger where her defenses gradually erode.

Sophie never actually appears in the story. We understand her only through the effects she has had on other people, through her work, and through the stories others tell of her. As Justine sifts the truth from the lies, she opens herself for the first time to her own truth and the truth about her mother, who has become, in Justine's memory, as much a mythical figure as Sophie.

Sheet Music is compelling psychological study, a family drama, a thriller. It does not belong to the conventional genre of erotica, but Ms. Rose conveys Justine's sexual intensity as vividly as she portrays her heroine's stunningly painful grief. She shares Justine's dreams and fantasies, dreams of her body being played like a cello by an unseen man, fantasies replaying what might have happened as she and Austen sat together in his car, when he didn't touch her, but he might have... Justine wants to believe that physical desire is all that matters, but she can't, quite:

"I've always thought of kisses as being of the night, of the darkness. But I glimpse colors and light moving in time to music when his lips are on me. The colors move inside me, relieving me of gravity. I might lift off in this light."

Then in the next breath:

"I pull back, break the connection. I've made a mistake and have to undo it."

Sheet Music uses food as shorthand for emotional and physical intensity. In the very first paragraph, Justine says of a lover, a famous chef who creates fabulously sensual "postcoital feasts":

"He knows I am always hungry. He doesn't know that, no matter what I eat, I am never full."

The book offers a feast of many flavors: the bitterness of regret, the saltiness of desire, the sweetness of love, the sour taste of desperation. Justine uses the vocabulary of the senses to convey the nuances of the heart.

There's a whiff of tragedy in Sheet Music. Justine comes perilously close to losing her self, losing a chance for fulfillment, reconciliation, forgiveness. Her fatal flaw? Blindness, perhaps, or arrogance (knowing she is clever enough to manipulate people, she does not hesitate to do so). Reading Sheet Music, seeing the world through her eyes, I wanted to shake her, to remind her that her acute senses and emotional intensity were a gift, not a burden. Ultimately, though, my sympathy for her overwhelmed my annoyance. She suffers, and finally experiences some kind of redemption. A reader can hardly ask for more.