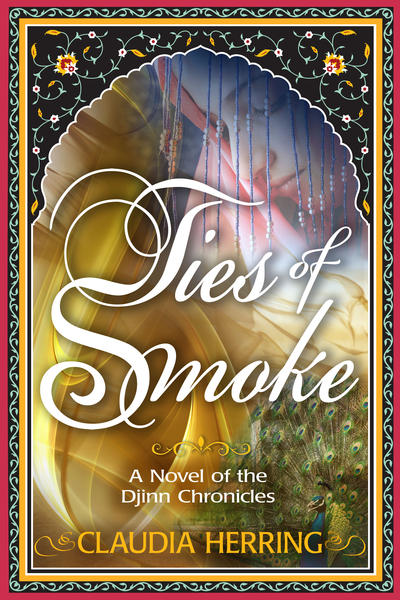 Lady Lavinia Bramley is master of a Djinni.

Lavinia runs away from her husband to make a life with the djinni Yasir, but it’s not what she thought, not pearls and flying carpets and wishes come true . . .

Her desperate efforts to find happiness with Yasir are foiled by her husband’s reappearance, murder attempts by the jealous magician who cursed Yasir to the urn, and Yasir’s desire for revenge.

Lavinia finds love, and loyalty, are as ephemeral as ties of smoke.

Lavinia squeezed her eyes closed at the bright light of late morning and let out a low moan. She squinted up at the girl who hovered nearby, arms crossed.

“Who are you?” Lavinia’s voice grated so scratchy and hoarse she could barely make out what she said. The girl spoke. Her name? She stood in front of her but remained unreachable, existing in another dimension. She stared beyond the girl. The smell of pungent spices and an unidentifiable rich, earthy fragrance gave the brightly colored room an exotic feel at first glance, but the low ceiling and close walls revealed it to be small and cluttered. Lavinia stretched her arms, trying to loosen them. So stiff, one would’ve thought she’d been bound—

She sat up straight. A cry escaped her lips. She held her wrists in front of her, no bindings, no marks. She had been freed. It was her first morning in the gypsy camp. Spreading her fingers, she frowned. Her mouth moved silently as she stared at her bare finger.

“My ruby ring!” Lavinia couldn’t swallow. “My ring.” She jerked her head towards the gypsy girl, eyes flaring. Her name, her name—Simza, yes.

The girl turned away.

Lavinia swung her legs over the edge of the bed. “It wouldn’t just fall off. It’s never been off my finger. Ever.” She jumped up and seized the girl’s arm. “What have you and your—your—” The man from . . . yesterday? . . . his knowing expression, his finger touching her ring . . . I am Chovihano—“Ch–Chovihano done?”

Simza let out a squeal as Lavinia’s nails pinched into her flesh.

“What have you done with it? Give it to me!”

Simza’s voice sounded small, wounded. “No. No. I have not taken your ring, missy.” She looked up at Lavinia, biting her lip, her dark eyes huge. “I did not take your ring.” Her dusky skin reddened like a bronze sunset. 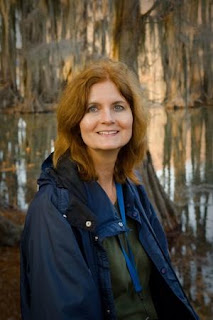 Claudia Herring aspired to be a baton twirler when she was five and an archaeologist at thirteen. When she became a graphic designer and an author of fantasy, she decided she'd hit upon the perfect compromise.

Along the way she worked as a gift wrapper, a server in a Mexican restaurant at an amusement park (where she rode the Black Dragon at midnight—an actual ride, not a sexual allusion) and an illustrator in medical graphics (where they featured videos on wound healing during lunch) at the Texas Medical Center.

Her novel, His Master's Bride, a historical fantasy with romantic elements set in Regency England, won first prize in the Houston Writer's Guild Novel Competition. Ties of Smoke is the second in the series The Djinn Chronicles.

When she's not delving into the world of the Djinn, Claudia is practicing yoga to go to that hushed space where she imagines and plots her next fantasy novel.

If you like Diana Gabaldon’s Outlander series or Carol Berg’s Soul Mirror series you'll love His Master’s Bride and Ties of Smoke.

TIES OF SMOKE on Amazon: https://www.amazon.com/Ties-Smoke-Novel-Djinn-Chronicles-ebook/dp/B01M2BXKD9/ref=sr_1_1

HIS MASTER’S BRIDE on Amazon: http://tinyurl.com/mg83vjj

Claudia will be awarding a $15 Amazon or B/N GC to a randomly drawn winner via rafflecopter during the tour!

congrats on the tour and thanks for the chance to win :)

What is the best book that you have read recently? Thanks for the giveaway. I hope that I win. Bernie W BWallace1980(at)hotmail(d0t)com

Congrats on the new book. I wish you much success with the book.