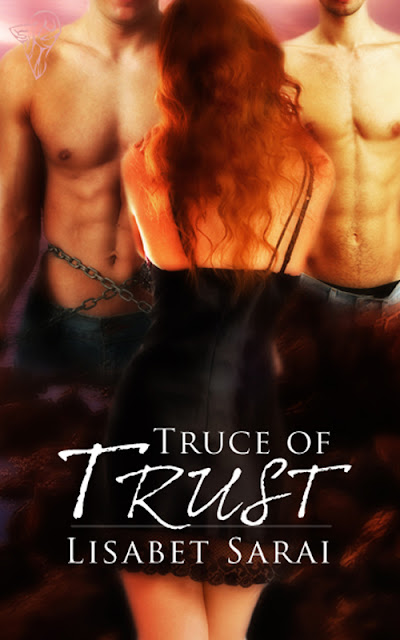 Happy Sunday to everyone! Per tradition, I have another kiss excerpt for you today. This one’s a luscious bit from my polyamory story Truce of Trust.

How can a woman choose between her husband and her Master?

“I’m home!” Leah’s voice rang through the silent house. No one answered, but she noticed the screened doors to the deck were open to the balmy September breeze. Someone must be around.

She parked her overnight bag near the door, dumped her briefcase onto a chair and headed down to the basement. Daniel was probably in his studio; he wouldn’t have heard her.

Two doors faced her at the foot of the stairs. Leah cracked open the one on the right, peeking inside. She didn’t want to distract her husband if he was in the throes of a creative fervour.

Daniel hunched over the synthesiser, his eyes closed, while his nimble fingers danced across the keys. Headphones nestled in his lush, black curls, sealing him away in his magic world of sound. He had the face of a Renaissance poet, elegant features harmoniously arranged—finely drawn cheekbones, strong nose, arched brows, sensual lips. His buccaneer moustache offset the androgyny of his countenance, giving him the air of a rake, and indeed, he could dream up some extravagant mischief when he chose. Now, though, he was focused inward, listening to the melodies in his head.

Love clutched at Leah’s chest, as it always did when she beheld his beauty. She ached to touch him. She imagined herself standing behind him, resting her palms lightly on his shoulders, feeling the shift and surge of his muscles as he played. She wanted to brush that stray curl away from his pale forehead, to run her tongue down the side of his neck and along his collarbone where it disappeared under his Led Zeppelin T-shirt. She would reach around to his chest, circling his sensitive nipples as her own tightened and throbbed, challenging him to ignore her caresses if he could.

Instead, she simply watched him, marvelling at his grace. She was about to shut the door and leave him in peace when his green eyes snapped open.

“Leah!” He tossed the earphones onto a pile of sheet music beside him. “Why didn’t you say something?” In an instant, he was in front of her, cradling her against his chest. “God, I missed you.”

He swept her into a kiss whose intensity confirmed his words. His mouth locked onto hers, his lips soft but his tongue brazen. He tasted of coffee and tobacco, his two vices while he was working. His passion melted her, as it always did. Her legs turned to rubber. Hot juices pooled between her thighs.

His swelling erection prodded her, through his jeans and the fabric of her dressy trousers. He reached between their bodies and unzipped her. His long fingers slipped into the opening, wriggled under the elastic of her panties and came to rest nestled in her bush. He moved his fingertips in gentle circles across her pubis in an intimate, teasing massage.

“Did you miss me?” he murmured, close to her ear. Leah tilted her pelvis, working without success to bring her hungry clit into contact with his roving fingers.

“Of course,” she replied, cupping his bulk in her palm to seize the offensive. It was true. In the middle of the afternoon’s editorial meeting, she’d had a sudden, highly distracting vision of Daniel lying naked on their bed, stroking his cock. Mr. Jamison, seeing her flush, had inquired sharply whether she was feverish. She had to excuse herself to go splash some cold water on her face.

Did Daniel actually jack himself off while she was at work? She ran her thumb over his denim-covered hardness and was rewarded by his shudder of pleasure. His potency still astonished her, after ten years of marriage. He was the only multi-orgasmic man she’d ever known. He might well have relieved his tension during the afternoon and still be stone-hard as he was now. “But you didn’t wait for me, did you?”

His finger slipped between her swollen lips and brushed the tip of her clit. She gasped, circles of pleasure rippling out through her body from that hidden centre. He was driving her crazy.

“Do you mind?” He bent to her lips again, this kiss more yielding, almost a supplication.

Leah lost herself in his arms. She parted her thighs, silently begging him for satisfaction. Inside the tight confines of her panties and trousers, Daniel’s skilful fingers worked their magic. Sensation built upon sensation, every touch a new thrill as he stroked, kneaded, and pinched her flesh. A climax coiled in her pelvis, tighter with every moment, the delicious ache making her jerk and writhe on the fingers that impaled her.

“I never get off without thinking of you,” he whispered in her ear. At the same time, he plunged his hand deep into her cleft. His words and his fingers together sent her spinning off the edge. The knot of tension suddenly unravelled, sending tendrils of pleasure whipping through her. She jerked and shuddered as delight exploded in her sex then expanded to include her whole being.

Leah would have slumped to her knees if Daniel’s hand had not still been embedded in her crotch. He wiggled his fingers, waking echoes of her cataclysm. When he was sure she could stand, he pulled his hand out of her damp garments. Grinning, he licked each of his fingers with a flourish.

“You inspire me.” Daniel unzipped his jeans. “See what I mean?”
Posted by Lisabet Sarai at 6:17 AM