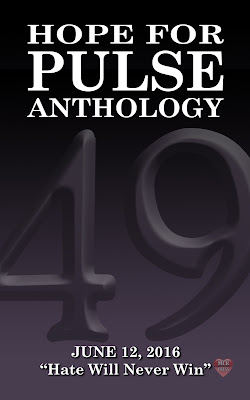 Hope for Pulse anthology
All proceeds support the victims of the Pulse shooting.


So there’s a lot of talk now, about fighting the hate that was stirred up by the recent U.S. election. Many of us have been shocked and distressed by the casual cruelty in the words of the new President-elect and his supporters. Statistic show that hate crimes—attacks on members of minorities, on the disabled and on women—have increased significantly over the course of the campaign and especially since the election itself. Some people now feel that it’s okay to physically attack people different from them, people they don’t trust, people on the “other side”.

That’s not us, we say. We care. We have compassion. We’re going to fight those right-wingers, crush those damned bigots, emasculate those deplorables who can’t make it in today’s world, so they have to take it out on someone more vulnerable. We’ll battle to the very last breath to wipe them out...

Um...do we really think we can fight hate with more hate? I don’t think so. Violence breeds violence (for instance, many abusive parents were themselves abused as children), and negativity simply triggers even stronger negative reactions from the opposing side. Hate is not a solution.

I know this may sound ridiculous, but I am convinced the only way to fight hate is through love and understanding. That means recognizing that everyone—no matter what their politics or religion or views on abortion or gay rights—every person has his or her own world view, his or her own reasons for believing and acting in a certain way. We can disapprove of a person’s opinions or actions, but when we condemn the individual rather than the actions, we’re falling into the same trap as the haters. Labeling a person as the enemy, inhuman, makes them the Other, and implies that it’s okay to hate them, even hurt them. That accelerates the spiral of distrust and violence.

What can do we do, then, to hold back what seems like a rising tide of inhumanity? Start by being human ourselves, modeling compassion in our own lives the greatest extent possible. That includes opposing injustice and evil when we can. We can demonstrate to bear witness. We can sign petitions. We can run for office, or volunteer for causes that uphold humanity. We can (as I do) write stories and give them away to support charities that work against the hate.

Each of us can make a contribution. But I truly believe we need to start by letting go of the hate and anger that turn other human beings into inhuman targets. Otherwise we’re no better than they are.


For a list of the charitable anthologies that include my stories, see http://www.lisabetsarai.com/books_antho.html