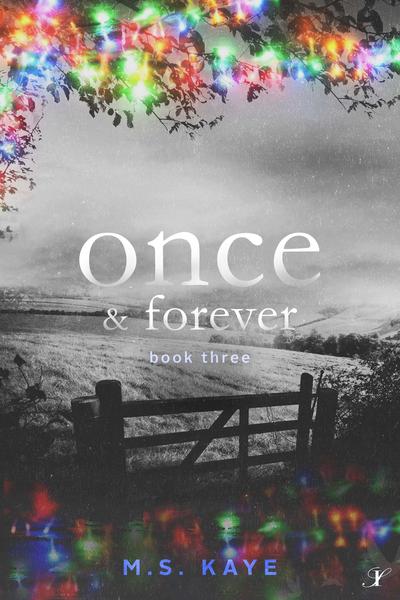 By M.S. Kaye (Guest Blogger)
What better way to enjoy Christmas than some delicious cookies? I’m rather picky about my cookies; of course, anything with sugar is probably good, but I like soft cookies much more than crispy and dry. This recipe delivers. I hope you enjoy!
Ingredients

1 cup butter
1½ cup packed brown sugar
(no white sugar, brown sugar only—that’s the secret)
2 large eggs
1 tsp vanilla
2½ cups flour
1 tsp baking soda
½ tsp salt
1 bag desired chips
Drop onto a cookie sheet and bake for 6-8 minutes at 400°.
Now for a great book to read while you eat these tasty cookies! Once & Forever is the 3rd book in my Once series, but each of them is a standalone read.
Once & Forever
Book 3

by M.S. Kaye
Who is the mysterious Santa who leaves toys on the convent steps?

After a twelve-year separation, Eden is finally reunited with her brother, Thomas, but why hadn’t she reached out to him in all those years? Eden, a nun, is constantly struggling against her dark past of living on the streets, and her attraction to Trace, an ex-convict farm worker. As Eden and Trace confess their pasts to each other and grow closer, will they be able to resist getting too close?
​
Amazon | Kobo | iBooks | Goodreads

Once
Book 1
Her first and also her once.
Jonathan and Rebecca’s paths cross at exactly the right moment, when each most needs to hear what the other has to say.
But Jonathan is three days from entering the priesthood, and Rebecca leaves him to his peace. But he is unable to find peace.
Without each other’s comfort and strength, they must each struggle to forge a new path, with only memories of the one day that changed everything.
But are they able to forget and let go?
​Amazon | Kobo | iBooks | B&N | ARe | Goodreads

Once & Again
Book 2
​She was once his secret desire… Will she be again?
Father Aiden, an ex-marine and new priest, falls in love with Maylynn, but he struggles to stay away from her. He’s successful for many years, though he can’t keep her out of his dreams.
Then one day she shows up for a pre-marital counselling session with her fiancé, Davis. Aiden soon realizes Davis isn’t who he says he is, but what does that mean for Maylynn, and for himself?
​Amazon | B&N | iBooks | Kobo | ARe | Goodreads

“You know what he did to git sent to prison?” one of the convenience store clerks murmured to the other.

Trace could just hear them over the horrible rendition of “Jingle Bells” playin’ through the speakers. He ignored them, like he always did. He tried to come into town late in the evening to avoid people as much as possible, but that also meant it was quiet enough that he could often hear what people murmured about him. Once he’d grabbed some protein bars and a can of beer, he headed up to the counter to pay.

The clerk with a buzz-cut told him the total, and Trace handed him some cash.

Neither of the clerks made eye contact with him, but they both hovered over the cash register as if he might snatch it and run.

“Thank you.” Trace stuffed the change in his pocket, took the bag of protein bars in one hand and his beer in the other, and walked out of the store.

He headed for the back lot toward the alley. He could get through most of downtown by way of the alley. This late at night it was almost too dark to see where he was goin’, but that was part of what he liked about it.

“Bitch,” someone growled. And then the sound of something—or someone—smacking into the brick wall of the back of the convenience store.

Trace moved more quickly and turned the corner, and he caught sight of a skinny, young woman punching a man in the face. His head snapped back. But then another man slammed his fist across her jaw. She looked so frail that the punch seemed like shooting a cannon ball at a piece of notebook paper.

“Hey!” Trace roared and ran at them. “Git away from her.”

M.S. Kaye has several published books under her black belt. A transplant from Ohio, she resides with her husband Corey in Jacksonville, Florida, where she tries not to melt in the sun. Find suspense and the unusual at www.BooksByMSK.com.