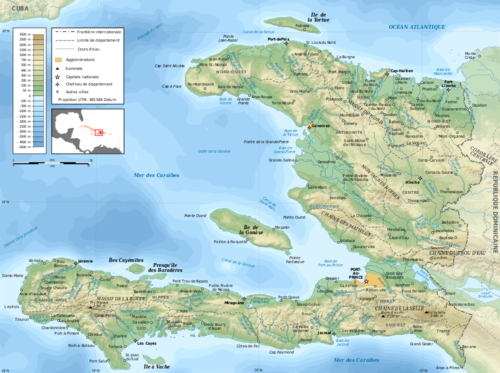 These days it seems like the world faces one disaster after another. Feels like only a few weeks ago that I ran a charity snog for survivors of the Italian earthquake. Now my news feeds are full of desperate images from Haiti in the wake of Hurricane Matthew. Over 900 people killed at last count. Reportedly 90% of settlements in the south of the country destroyed. The impoverished country still hasn’t recovered from the earthquake in 2010. Matthew’s devastation is a double whammy.

For every comment left on this blog post, I will donate one dollar to the hurricane relief fund at Oxfam America. You can donate, too:

Also, I will give away a copy of Rough Weather to one randomly selected commenter, so please include your email address.

(And don’t forget to visit Victoria Blisse, who has more sexy Sunday kisses on offer!) 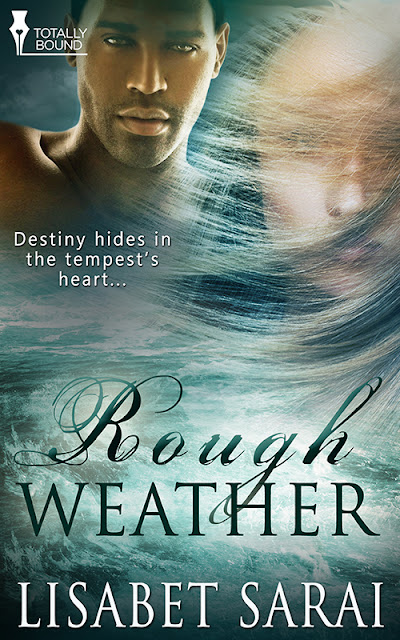 She fought the wind along every inch of the path through the dunes. Crouching low, leaning forward to offset its force, she battled against fierce gusts that threatened to sweep her from her feet and dash her to the sand.

The intermittent showers had become a chill downpour. She paused to catch her breath, peering through the grey curtain that obscured her view of the sea ahead, and sent her mind questing for another trace of Marut. Thunder crashed around her. Otherwise, there was no answer. Dread tightened into an aching knot in her chest as the rain beat down upon her nakedness and plastered her hair to her head.

The rain is hers, the sweet springs and the salty billows, all of the watery world.

Although usually she loved the rain, now it was just another obstacle keeping her from her lover. Enough. As soon as she issued the silent command, the precipitation slackened to a drizzle, though the wind continued its relentless assault. She had no time to wonder at this. Ahead, massive breakers rolled onto the beach, up to the very foot of the dunes. The rocks where she’d first seen Marut were half-submerged in a roiling whirlpool flecked with ivory foam.

Stepping into the seething ocean, she felt the current tug at her ankles and draw her deeper. A sheer wall of water loomed over her, gleaming like polished black glass. She dived into the wave before it could swallow her, kicking hard to send herself into calmer waters closer to the bottom.

Even her preternaturally acute vision could discern few details in the murk below the surface. Still, she had no doubt she was headed in the correct direction, towards the westernmost extremity of the island, some twenty-five miles away. A sense of Marut’s presence drew her like a radio beacon. With her mind on her lover, she allowed instinct to control her body. Power rippled along her spine, propelling her through the depths, faster than she’d ever swum before. The water offered no resistance. Ondine gave herself up to her element, leaving a bubbling wake as she raced towards her lover’s call.

She broke the surface finally, after an endless transit that might have taken minutes or hours, and filled her lungs with ozone-scented air. Crests of wind-whipped water hid the horizon, but alternating red and white flashes from the Aquinnah lighthouse confirmed that she’d reached her destination.

Useless to call out.Ondine focused inward, summoning an image of her mate.

Marut. Beloved, where are you?

The drone of an engine reached her ears. She gazed at the racing clouds above her.

The pitch of the engine noise rose higher and higher to a keen of tortured metal. Then silence. Seconds later, a small plane ripped through the clouds and plummeted downwards, clearly out of control.

“Marut!” Her throat was raw with screaming. Wind-driven water washed over her head. Blinking the salt from her eyes, she followed the plane’s deadly trajectory, trying to determine where it would land.

As she watched in horror, one wing tore way and tumbled into the sea. Unbalanced by the loss, the plane turned jerky somersaults. Fierce gusts tossed the aircraft to and fro like some weightless bauble. She kicked hard to raise her head above the waves and caught a glimpse of the red clay cliffs to her right. Please, she prayed to some unknown power, keep him away from the coast.

As if in answer to her entreaty, the damaged craft veered to the left, caught in some random blast of air, then hurtled down into the ocean.

The minor tsunami that followed the impact sent her diving again. She surfaced next to the wreckage of Marut’s Cessna, which floated on its side, its remaining wing pointing into the water like a rudder. Ondine wrenched the door open. Seawater poured into the compartment.

Marut lay crumpled over the controls, battered and bleeding. Physical pain shot through her at the sight, paralysing her for a long moment. But there was no time to waste. It took every ounce of her strength to drag him from his seat and away from the plane, which began to sink as the sea filled the cabin.

Ondine clutched his inert body against her side with her right arm while paddling with her left, working to keep his head out of the water. Although his eyes were closed and a ragged, bloody gash marred his forehead, he was definitely breathing. A wave swamped them both. Marut sputtered and gasped without regaining consciousness.

I’ve got to get him to shore. How could she, though, without him drowning in the storm-churned swells?

All of the watery world. The truth was a sudden bright light scattering the darkness in her heart. Still clasping her lover to her breast, she let her thoughts spread out across the heaving billows.

The winds of the northeaster still howled around them, but the surging ocean calmed, bit by bit. Gentle undulations rocked their bodies. She rolled Marut onto his back, her arm across his chest, and prepared to tow him to land.

“Uh—uch!” Racked by a fit of violent coughing, he sank beneath the surface for an instant. She hauled him up into the air and he twisted in her grasp, struggling to see her face. “Ah…uch…Ondine? Oh, thanks be to the loas! You’re here!”

“Don’t move! You’re injured, maybe badly…” She tried to flip him into a back float once more, but he squirmed like a snake in her arms.

“The storm…the plane… I had to get home to you…”

“Hush! Save your strength…let me…”

The wind snatched the words from her lips. Leaving the water behind, she rose on a pillar of air, cradled in Marut’s arms. He murmured endearments as they flew higher, covering her face with kisses. The gale swirling around them stole his words too, but she felt every one.

Now they were among the clouds, enmeshed in darkness with lightning crackling around them. Electric currents rippled through her flesh, awakening her senses. Marut’s eyes glowed with inner fire. He released her in order to tear off his tattered clothing, yet still the winds bore her up as steady as the waves below. Exhilaration and joy drove out any hint of fear. In perfect trust, Ondine surrendered to the prince of air.

Don't forget to leave a comment. I'll donate a dollar for every one. And you could win a copy of Rough Weather, too!
Posted by Lisabet Sarai at 5:03 AM

Shared on all platforms. :)

A wonderful excerpt and a truly humanitarian offer. Thank you for the links. Everyone should help as much as they can. Take care.

An exciting extract, and for a good cause, too. I've linked to this post on my blog and hope you get lots of comments.

Thanks for sharing the excerpt and the cause!

When such things happen, so many good people step up to help people they don't even know. Thank you for your generosity.

A wonderful excerpt and a truly humanitarian offer. Thank you for the links. Everyone should help as much as they can. Take care.

Thank=upi for your excert & for your willingness to donate... Have a blessed day.

Lovely excerpt and wonderful cause. Kudos for your generosity!

Wonderful cause. I feel bad for Haiti.
debby236 at gmail dot com

Thanks to everyone who has commented so far. I hope you'll tell your friends to come by!

nice of you to do

This is such a hot book!

Sounds good, and for a good cause!

A great cause to support. Thank you for the excerpt =)
humhumbum AT yahoo DOT com

Greetings, everyone! Thanks so much for dropping by to comment. I'm about to donate $15 to Oxfam, to help the recovery effort. It might not seem like a lot, but every bit helps.

Meanwhile, KD Grace has won the giveaway for a copy of Rough Weather. Congratulations!