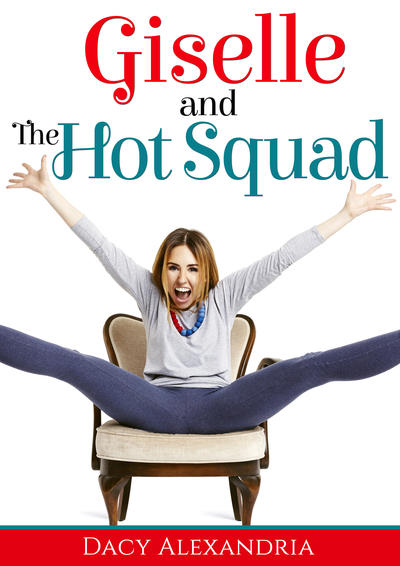 Firstly I'd like to thank Lisabet for hosting my little bit of rambling that will hopefully entice you to read my new book Giselle and The HotSquad, published by eXcessica.

Apparently I have super weird dreams compared to the rest of humanity. For instance, I once dreamed I was getting a divorce from Kristen Stewart, and in the middle of court we were attacked by Nazi robots and were forced to rekindle our love to fend them off. Another weird dream was about a thirty year old woman who had to go to Italy to sort through her dead mother's remains and found many a magical object. This dream is the reason I'm with you on this lovely day. Unlike my team up with Miss Stewart I wasn't motivated to marathon Twilight, instead I was spurred on to write a supernatural movie script.

The age of the woman got brought down to eighteen, because being surrounded by eighteen and nineteen year olds in my ballet classes I knew them like they knew the best IG filters. The script was shifted from Italy to California, and the magically charged main character, then named Kate soon to be renamed Giselle, was given four super heroine friends and a vicious witch for foe. I thought I had a blockbuster on my hands. I was going to get this movie made easy peasy, be invited to many Hollywood bashes, and maybe just maybe use the Nazi robot dream story to hit on Kristen Stewart. I'm smooth like that, see me for my Pick Up Artist classes.

I took the script to a consultant named Melody Jackson, who happens to be a lovely woman. I had worked with her before on an award winning script I wrote, and she told me this one was hilarious, and had her not just writing LOL but literally LOL. Perhaps even LMAO? However, while Melody loved the script she thought the story would make a fantastic series of books, and convinced me to go that route.

I think the funnest part of writing the story wasn't the wild sex, but is was changing the four girls besides Giselle from the script into her three dimensional roomies. I love Disney princesses so I got Princess Tristian Anna Maria Gunnarson, a figure skating, exotic dancing, sword swing royal from the country of Gyllengaard. I wanted a tough take no shit tomboy to counter Tristen's good breeding and developed the rocker chick Fleur. In the spirit of the eternal human quest to be the god of social media and my love of gingers, I created Sofi. Finally after my trip to Nashville to see Taylor Swift in concert (OMG!) where I found everyone is just darling and wonderful, I wanted Giselle to have the only rude person from Nashville at her side and little Dusty was born.


I do very much hope you'll enjoy the story as much I enjoyed writing it. I was actually going through a severe illness during its creation, so I'm just happy to actually have it out and be able to speak with you. And if you like the book and get a laugh I'll be even happier!

It's the start of Giselle Nyfall's freshman year at the prestigious liberal arts school Drouin University in Manhattan. From the moment this well endowed innocent bounces in from Los Angeles, things go awry. A housing mix-up denies her a dorm and forces her to spend the first night in a male dorm with a cute but talkative conspiracy theorist. Only the instincts of a true exhibitionist earn Giselle some sleep. Thanks to the wicked temptress that heads student services, Giselle lands a living place much better than a freshman dorm: an upper east side condo! Giselle finds her roommates a strange oversexed lot, a rocker chick from Boston, a true blue princess, a vain Instagram starlet, and BB gun toting southern belle. Even weirder are the men of the condo complex, who appear to be placed under a devastating sex caused curse! The girls put aside their differences and throw themselves boobs first into a solution that probably won't get mentioned in any graduation speech.

Finally, the tour of the condo concludes with the not so grand finale of Giselle's room. The storage closet.

“What's in that box down there? Oh my god, is that a butt plug?"

“The ginger bitch keeps hers in here. It can go up your ass, but it can't go in your dresser drawer?”

Ginger bitch? Butt plug stored like it's a spare bottle of Windex? Add that to the thong/boy short rule, the BB gun, and it all equals an even more confused Giselle Nyfall. What kind of oversexed zoo did Anika banish her to?

“Pretend you're sleeping in a Hustler store.”

“No one sleeps in the Hustler store! People do not sleep next to butt plugs! This is nuts. There has to be some mistake.”

“I'm starting to think your parents may have made one.”

Giselle stomps past Fleur down the hall to the living room.

“FLEUR TROUBADOUR, YOUR IRRATIONAL HARRASSENT OF THIS YOUNG LADY SHALL CEASE AT ONCE,” says another voice. This one has a silvery quality. Fleur shrinks.

“Shit," she hisses at Giselle. "You got Viking Barbie on my ass.”

Viking Barbie appears, carried in by long, gorgeous powerful legs that reach up to a slender waist and a rock-hard ass. Beneath a luxurious frilled-sleeve shirt a pair of pendulous breasts fill out the floral pattern. Bright red lips form in a cupid's bow, resting above a rounded chin and square jaw. Her hair has been fussed over into a blond bob of rolling waves. The way she looks, the way she walks, the air around her seems like slow motion. If Fleur is a doll under a Christmas tree, then Viking Barbie is a goddess blessing The Empire State.

“Welcome, Giselle. My name is Tristen.” Deep-set almond eyes appraise the newcomer. “If Fleur had only bothered to check her text messages, she would have known you were coming and spared herself exposure as a wretched bore. Yet, I am obliged to think her a fool for not simply directing you the fifth bedroom Come. I shall show you.”

Tristen leads the way to the room next to the storage closest.

“My baddies, I opened the wrong door,” Fleur says with a halfhearted shrug.

The grey infused bedroom reminds Giselle of Anika's silver hair. Nearly everything is shades of grey. The accent rug, cushioned seats, a side table, are all one color scheme.

As happy as she is to have a real room, Giselle is distracted. “I know you. I've seen you on TV before!” Giselle exclaims to the tall blond.

Barnesand Noble
Posted by Lisabet Sarai at 3:00 AM

Welcome to Beyond Romance, Dacy!

Hilarious excerpt, and wild images! Who did the artwork?

I hope the book does really well.

Hi, Lisabet, thanks for having me! The artwork was done by a talented artist going by the moniker Pumpkin Sinclar. He has done a tooooonnnnn more of the girls as well.

I read it, it's hilarious!

Oh, Jody, thank you so much! As I told Lisabet, I aim to amuse lol.

Oh, and Jody if you don't mind can you leave a nice review on Amazon pretty, pretty please